Watchmakers are now more than geared up in tackling a new generation of socially-aware consumers. Photo: The Star Graphics

Fashion has changed. As consumers become increasingly more “woke”, brands are evolving to keep up.

The big players in the industry are catering to this paradigm shift. Luxury watchmakers for example, are not just working on creating innovative timepieces. They are also spending more time on their social campaigns.

Of course, sustainability is a hot topic at the moment. But other issues like women’s rights, the arts and specific community matters have become a focus too.

As the different watch brands compete to convince customers that their creations are the most reliable when it comes to telling time, they must now also show that their companies can be relied on to do the right thing.

For the new generation of shoppers, buying a special timepiece has to mean more than just the design or innovative inner workings. The brand chosen would also need to be one that aligns with their values.

As it is, the issue took centre stage at this year’s Watches And Wonders. The international trade event, which was held virtually in April, even dedicated one of its daily panels to corporate social responsibility.

During that discussion, South African-born Swiss professional explorer and adventurer, Mike Horn, aptly pointed out that the industry has a massive role to play in making the world a better place.

He spoke on the state of our planet, where he has witnessed rapid change to the climate – especially in regions like the North Pole.

But it was not just confined to climate issues. According to him, the industry should take all-encompassing steps for the future of everyone.

“I don’t like the term ‘social responsibility’,” he however said. “I prefer ‘social investment’. We need real action by companies and we need it now.” 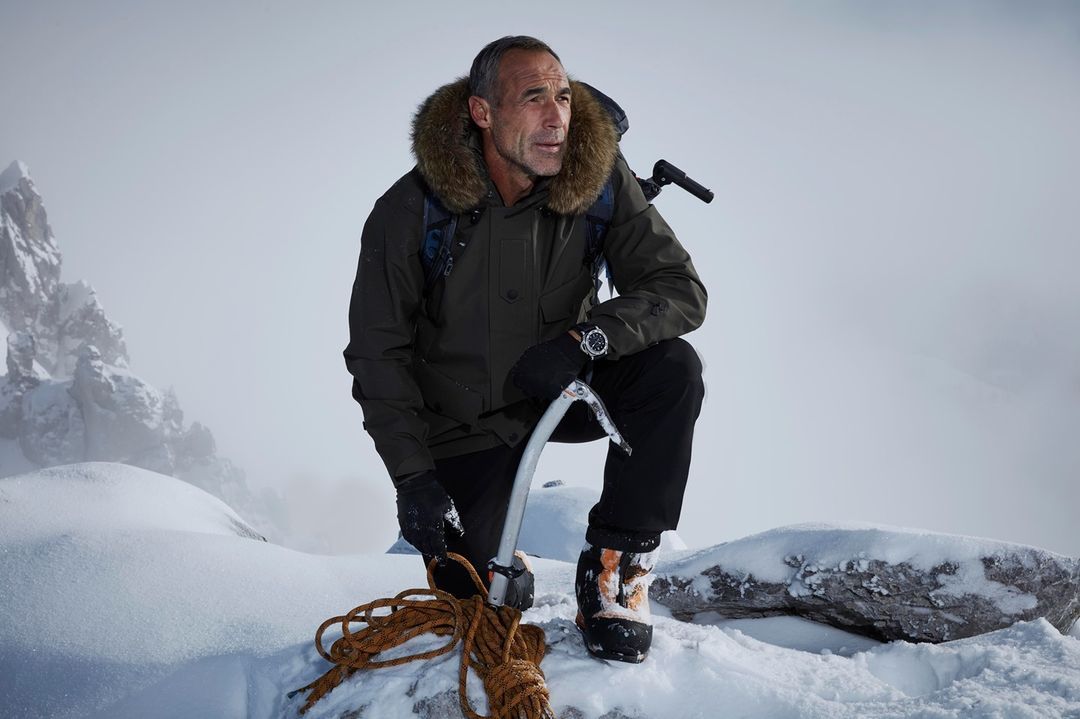 Mike Horn spoke about corporate social responsibility in the watchmaking world at this year's Watches And Wonders. Photo: Instagram/Mike Horn

The idea of sustainability in watchmaking is not new, but it seems to be in the spotlight this year – more than ever.

Among its novelties for the year, Cartier unveiled a timepiece with a strap made from recycled apple peels. This surprising watch is also solar-powered, the first of such from the luxury maison.

Similarly, Speake-Marin presented a watch with a lime tree wood and cork lining strap. Part of the proceeds from sales will be channelled towards protecting the critically endangered rhinoceros.

Oris introduced a watch created in partnership with the Common Wadden Sea Secretariat and its mission to conserve the Wadden Sea, the world’s largest tidal system and a Unesco World Heritage Site.

Panerai, on the other hand, launched a unique version of the brand’s iconic 44-mm Submersible watch. A total of 98.6% of its weight comes from predominately recycled materials.

These are all in addition to a wide range of campaigns to save the planet. For instance, ocean conservation or the restoration of biodiversity in forests, as well as revitalisation of entire ecosystems.

There is more to being sociably responsible than matters of the environment though. Cartier is continuing with its philanthropic initiative committed to improving the lives of the most vulnerable.

The company revealed that 65mil Swiss Francs (RM295mil) has been invested up till the end of 2020. It has partnered with 40 non-profit organisations – NGOs, UN agencies and social enterprises – that address the most pressing problems in the least developed regions.

These deserving individuals were celebrated for creating start-up businesses that serve as catalysts for change and growth within their communities and the larger society. Philanthropic programmes target the most pressing problems in the least developed regions around the world. Photo: Cartier

Only Watch, a biennial charity auction whose aim is to raise funds for research against Duchenne muscular dystrophy, has been supported by various watchmakers. They contribute unique timepieces, the sales of which is donated to a charity in Monaco.

This year’s edition is scheduled to take place in November. Some of the more prominent names include Girard-Perregaux, Frederique Constant, Patek Philippe, Jaquet Droz, Audemars Piguet, Boucheron and Bulgari.

“The acts of altruism, compassion and empathy seem to have accelerated since the pandemic hit. They are a reason for optimism,” Luc Pettavino, founder of Only Watch, pointed out.

He said that since 2005, the auction has witnessed incredible support. The research supported have reached a promising stage of preparation for a first clinical trial in 2022, with the reasonable hope of changing the lives of thousands of young people and families.

“This year, we have the great privilege to gather more than 50 brands, as well as people who have collaborated to create some of these unique timepieces, to raise funds for research into Duchenne muscular dystrophy.”

Omega has been a proud and avid supporter of Orbis International and its Flying Eye Hospital since 2011. While it designs and sells several Orbis watches, a portion of the proceeds from each is channeled to the cause.

In the past, Omega has even brought its ambassador Cindy Crawford to visit the Orbis International team in Peru.

They met the healthcare professionals and the young patients whose lives – and those of their families – were changed with treatments that restored their vision.

To this day, the Orbis campaign remains a big part of Omega’s social responsibility legacy. 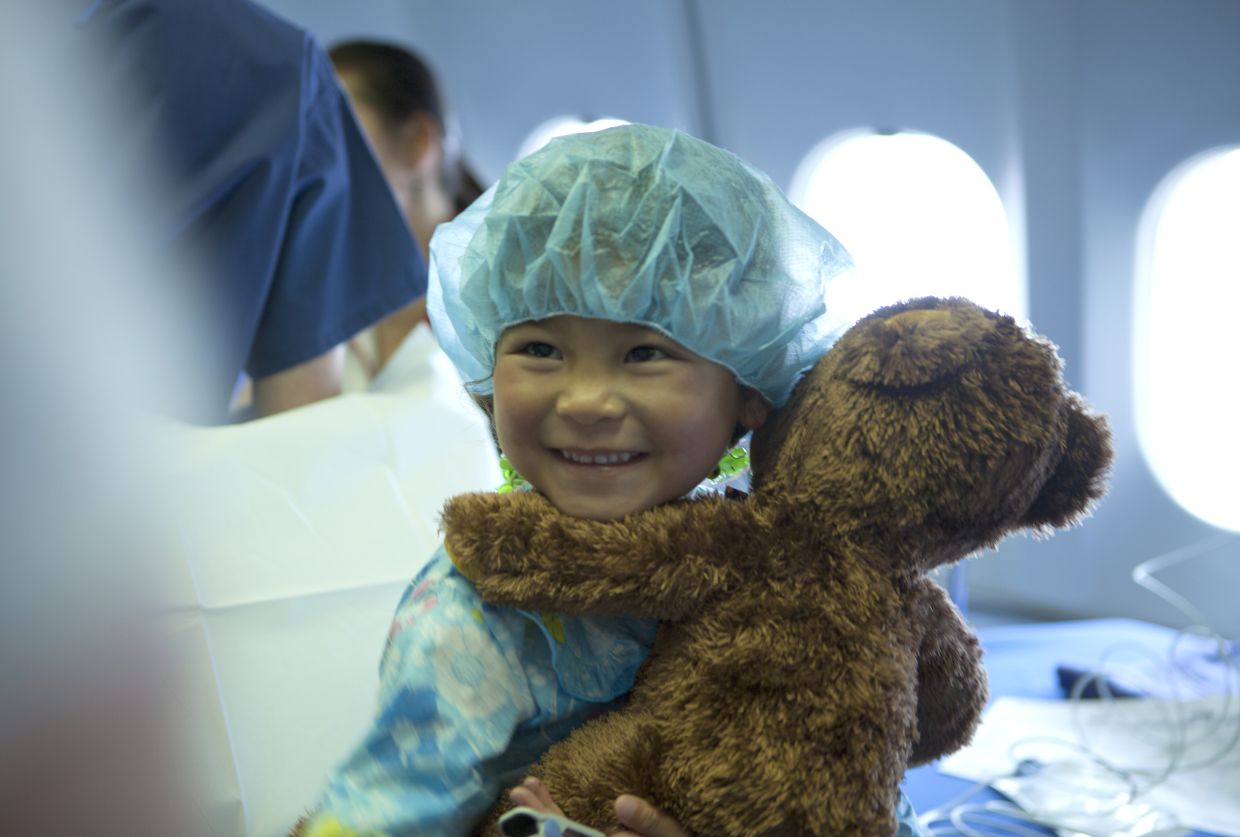 Orbis International is supplied with cuddly teddy bears for each of its young patients. Photo: Omega

Then there is the support for the arts. A well-designed timepiece is, after all, an artform in itself.

The first edition of the Richard Mille Art Prize (open to all Emirati and UAE-based artists) was launched this year. Collaborating with Louvre Abu Dhabi, the watchmaker will select one winner from an upcoming November exhibition, with the prize being US$50,000 (RM207,890).

“As an avid art collector, I have long been inspired by the visionary perspectives brought to light by contemporary artists,” Peter Harrison, the company’s CEO, related in a press release.

“The Richard Mille Art Prize will redefine the benchmarks of contemporary creativity, with a goal to offer exceptional artists the opportunity to create a new dimension of their potential.”

For IWC Schaffhausen, it is the art of filmmaking that deserves attention. Its annual Filmmaker Bursary Award is seen as a commitment to UK film and those who drive its creative success.

Through it, a prize of £50,000 (RM 286,460) is given to a British writer, director, or writer-director whose first or second fiction feature film premieres at the British Film Institute (BFI) London Film Festival.

This year’s edition has a strong focus on representation and inclusion. For the first time, all films applying for the bursary award will have to meet the BFI Diversity Standards.

It aims to support opportunity for underrepresented filmmakers and raise awareness of the drive towards greater inclusion in the film industry.

“Diversity and inclusion are cornerstones of IWC’s sustainability journey,” said Franziska Gsell, CMO of IWC Schaffhausen, in his statement to the media.

“We strive to build a diverse workplace culture that is based on trust and respectfulness. Knowing those good intentions are not enough, we created a dedicated global Diversity, Equity and Inclusion council within IWC in 2020.”

He further added that he is excited to develop the bursary award in association with the BFI in a similar direction.

This only shows that watchmakers are now more than geared up in tackling a new generation of socially-aware consumers. They know that it is not just about selling timepieces anymore, as much as it was in the past.

Luxury timepieces, well made as they are, cannot be stuck in tradition. The measure of how popular a watch is (which is linked to the brand’s image) hinges on more than the ability to tell time.

How jewellery is also joining the 'green' revolution

Cher, 76, stuns guests at Balmain runway show with catwalk in a spandex bodysuit
Style Watch: Malaysian model Sofia Goh is all about the classic chic look
Top beauty-related mistakes you're making, and how to fix them
Designer Daniel Lee replaces Riccardo Tisci at Burberry
Why you should include castor oil as part of your beauty arsenal
Young Black designer dresses Colombian vice-president in 'resistance' fashion
Believe it or not, you can curl your hair by just using a soda can
Kim Kardashian culls Dolce & Gabbana archives for Milan Fashion Week show
Vanity Fare: Fresh, radiant and bold fragrances to lift your mood
Designer handbags made from stale bread? This fashion brand wants your dough