What does heritage mean to fashion brands? A lot of different things, apparently. Photo: Gucci

For the most part, measure of success for a fashion brand often lies in its longevity. As the industry is seen as incredibly fast-moving, names that can endure for years are often celebrated for their heritage.

Iconic faces who rose to fame alongside the American designer in the 1980s and 90s (like Naomi Campbell) joined forces with today’s crop of it-models to present a lively and vibrant collection.

The theme was “opening night” and it signified everyone having the freedom of stepping out once the world opens up again. As such, cosmopolitan party looks filled the collection for Autumn/Winter 2021.

“For my 40th anniversary collection, I was really thinking about the joy in getting dressed up and stepping out for a night on the town, ” Kors pointed out, in the show notes released to the media.

The 16 looks were even fitted with a QR code that unlocks runway clips from their heydays. That said, the show stealer is Campbell wearing a black, floor-length, sequin gown and wool coat.

“This collection is all about making every moment a special occasion and feeling confident, glamorous, and upbeat, ” Kors said, about his really special celebratory range of ready-to-wear.

Across the Atlantic, British leather goods brand Mulberry similarly celebrated a milestone – its 50th anniversary. A new sustainable manifesto was then launched to commemorate the occasion.

Mulberry pledges to adhere to a regenerative and circular model, encompassing the entire supply chain, from field to wardrobe by 2030. This attempts to answer the question: Can leather ever be sustainable?

Six key actions for change have been identified to achieve what the brand labels as “bold commitments”. They include extending the life of products through repair and restoration, as well as developing the world’s lowest carbon leather.

CEO Thierry Andretta said that Mulberry is committed to creating a hyper-local, hyper-transparent “farm to finished product” sourcing model, something which he is immensely proud of.

“At Mulberry we have already taken significant action to embed sustainability across our business, but today we offer our commitment to a programme of transformative change, embedding principles of regeneration and circularity across our entire supply chain.”

Over in Italy, Gucci marked its 100th year with a collection melding old and new. Named Aria, it offered a metaphorical ride through the fashion house’s spectacular and beautifully coloured past.

Read more: Remembering Elsa Peretti, jewellery designer with the 'vision of a sculptor'

Creative director Alessandro Michele paid homage to various influences that have come to form Gucci’s DNA over the years, culminating with a look to the future – the “hack” involving sister Kering label, Balenciaga.

“Demna (Gvasalia) really enjoyed the idea of me using his styles to transform them into something else, ” British Vogue reported Michele as saying. “It’s not fashion stealing from other designers, but I went to a friend’s house to steal.”

Looks from the runway show bore the unmistakable hand of Balenciaga’s Gvasalia. The two brands’ signature styles merged to form a new look birthed from heritage that evolved a century later.

“We get into a club, neon lights and cameras, but we find out that the party we deserve doesn’t happen in the lobby of a London hotel of the 20s. It’s rather like a deep and ecstatic diving in everything we yearningly miss today, ” the press release explained.

Use Zalora Promo Code to save extra on your fashion purchases 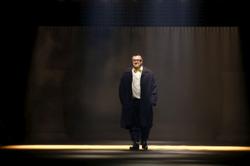