Setting up a television channel from scratch isn’t the most obvious or easiest thing for a math teacher to do – especially without prior technical knowledge and for use inside a prison.

But that is exactly the task Petros Damianos, director of the school at Greece’s Avlona Special Youth Detention Center, took on so his students could access the lessons that coronavirus lockdowns cut them off from.

Greek schools have shut, reopened, and closed again over the past year as authorities sought to curtail the spread of the virus. Like their peers across much of the globe, the country’s students adapted to virtual classes.

But the online world isn’t accessible to all.

The Avlona detention centre, a former military prison, holds nearly 300 young men aged 18-21, and sometimes up to 25. The school Damianos founded there in 2000 now teaches primary grades through to college, following the national curriculum and awarding graduation certificates equivalent to any Greek school. While attendance is voluntary, the prison school has grown in popularity and saw record enrollment in September, when up to 96% of inmates signed up. But with Internet devices banned in their cells, the prison’s students had no way to continue learning when the lockdowns cancelled classroom lessons.

“Our teachers couldn’t reach the kids like they reach all other kids in Greece, ” said Damianos, a mild-mannered man in his 60s. “This was a big problem, a very big problem that seemed almost insurmountable.”

The fact that inmates are stacked four or five to a cell with less space per person than the prison classrooms didn’t matter. Their school had to shut along with the rest during lockdowns in March and again in November.

When he heard in early December that Greece’s schools wouldn’t reopen before Christmas, “I felt... despair, ” Damianos said. Making matters worse, the lockdown ended visits and furlough leave, so inmates “experienced a double prison”, he said.

While access to education is important for all students, it is perhaps even more critical for Avlona’s, some of whom have been convicted and others who are awaiting trial. Many never graduated or even completed primary grades, and education is the most concrete tool they can use to turn their lives around. “Essentially, our students are those who... before they got to prison, the education system expelled them, ” Damianos said. “These kids are kids we didn’t catch in time. To whom we as a society, when we should have, didn’t give what we should have given.”

Desperate for a solution, Damianos had an idea: he could reach his students through the televisions in their cells if he could figure out how to create a dedicated TV channel to broadcast their classes.

Technician friends told Damianos it was possible with the necessary equipment. The next hurdle was obtaining the equipment with shops also closed during the nationwide lockdown. Then the school’s staff had to learn how to use it.

“I very quickly realised – and this is the magic of it, too – that this whole thing is essentially DIY, ” Karadosidis said. “Do it yourself, with whatever materials you have, with whatever tools you have, to try to do the best you can.”

Through donations, volunteers and online orders, the staff cobbled together what they needed. A critical piece of equipment – a modulator to transmit the TV signal – ran into delivery delays, so a store lent them an older one. Two hundred metres of cable arrived, and inmates helped run it from the school to the prison’s central aerial. An inmate takes a book from the library of Avlona's prison school.

One prison classroom was converted into a rudimentary studio, with a cheap hand-held video camera taped to a tripod.

Multicoloured Christmas lights served as a makeshift recording light, warning those outside to keep quiet during recording sessions.

On Jan 8, about a month after Damianos had the idea, the channel was ready. They named it Prospathodas TV, Greek for “Trying TV”. Through word-of-mouth, they got inmates to re-tune their televisions to capture the new channel.

The pilot programme was a half-hour Math class. Now the channel operates 24 hours a day, running six hours’ worth of pre-recorded lessons on a loop on weekdays, and eight hours of content on a loop on weekends. The teachers record new lessons daily: from Math and Handicrafts to Economics and Music.

Karadosidis edits into the night and broadcasts the classes the next day, since live broadcasts are still beyond their technical capabilities.

For the students, going to class provided more than just education. Beyond the series of barred metal doors, past the courtyard with soccer balls caught in coils of razor wire, school was a brief respite from the harshness of prison life. 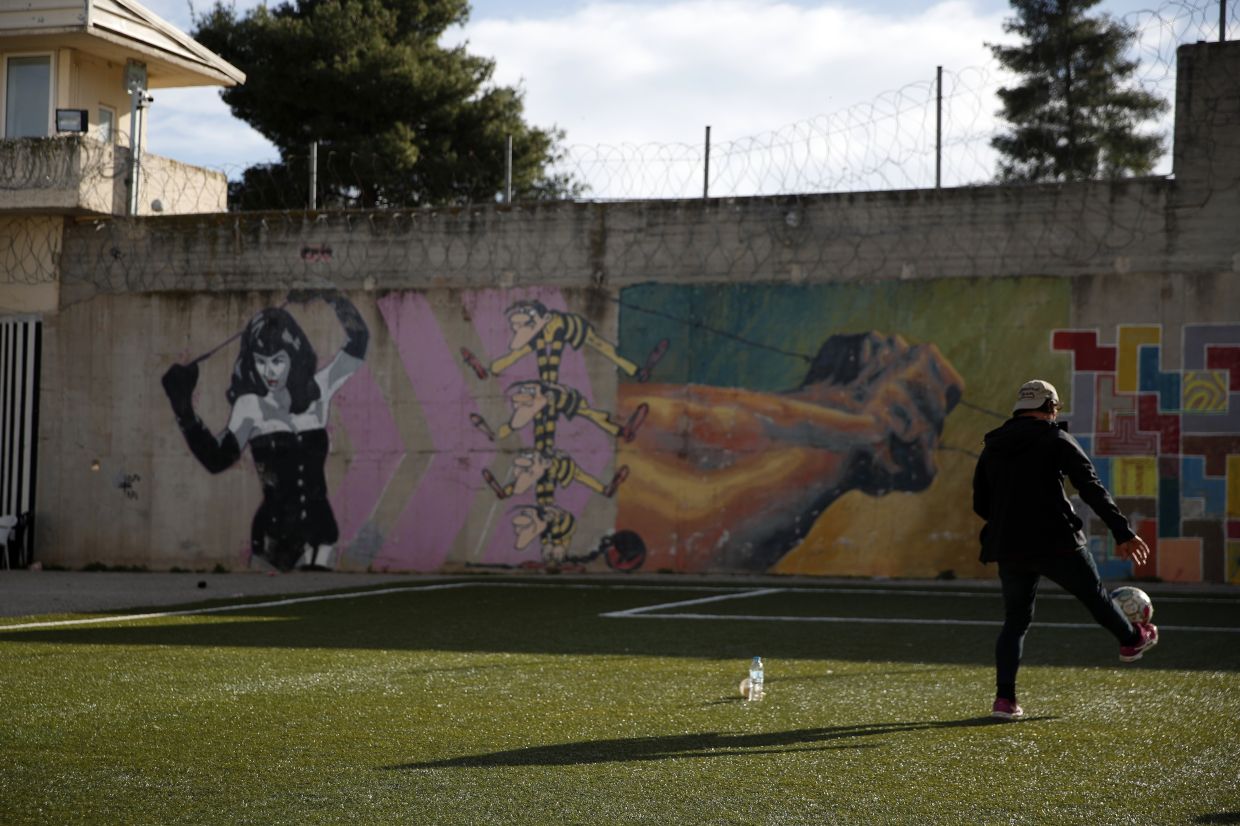 An inmate plays with a ball at the yard.

“School is something different. It’s a bit more human than the rest of the prison, ” said M.S., a 21-year-old who earned his high school diploma in Avlona. “We come here and we joke around with our teachers. They take care of us.... It’s a bit like a family.”

Under prison regulations, inmates can only be identified by their initials. M.S. has about another two years to go after serving 31 months for robbery, theft and beatings. He knows his criminal record has dashed his dream of teaching literature, but he made it into university and is now studying photography and visual arts.

Having graduated from high school, he doesn’t need to watch Trying TV, but he has followed a class on making purses out of magazine paper and tape “because I’m interested in handicrafts and stuff. It gives me ideas”.

He says the TV channel has become quite popular.

“You run out of (cigarette) filters and you go into the next cell to ask for a filter, and you see five big guys battling with their little paper strips trying to make purses, ” he said. “Then you go to the next cell later, and someone’s trying to solve an equation.”

Once the pandemic is over, Damianos would like to expand the channel to include documentaries and other worthwhile programmes. But while it’s plugging a hole in education and maintaining contacts between students and teachers, he stresses that televised lessons can’t deliver what in-person classes do.

“Let’s be honest, the channel can’t replace the education that takes place in school, ” Damianos said. “It is very important, but it’s not enough.” – AP

Ex-convicts need jobs too, and also help with returning to society