Delbir Singh (in white) with the Rela team at Sungai Buloh Hospital, about to bring the food packets into the building. Photos: Jesvinder Singh

In good and bad times, our ties with family and community bind and strengthen us. This column celebrates how Malaysians care for one another and make this country better for all. Please share your inspiring Malaysian stories with us. Email us at lifestyle@thestar.com.my

For IT service delivery manager Jesvinder Singh, 51, helping others is all about “the value of life”.

“When some of my fellow villagers were infected with Covid-19, my friends and I decided to do something to help them, ” says Jesvinder, from Kalumpang, Hulu Selangor, a village on the border between Selangor and Perak, 80km from Kuala Lumpur.

“If people get infected with Covid-19 or don’t have good health, then what’s the value of money? Isn’t it better for those who have the funds to then use it to help those who are ill so that everyone can be healthy together?” he adds. 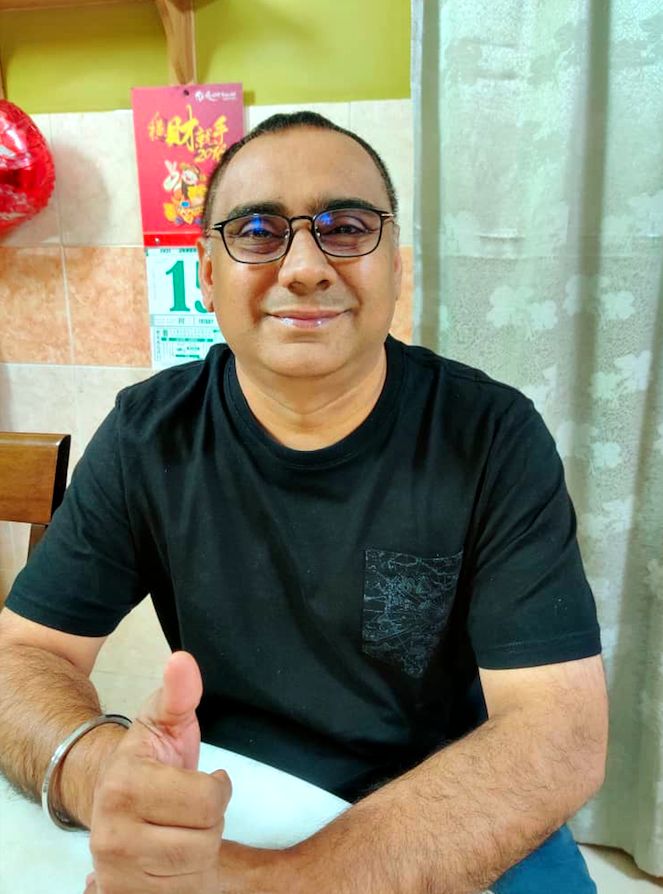 Jesvinder first started organising free meals for his fellow villagers when they were hospitalised due to Covid-19.Jesvinder was talking with his nephew and a friend when they discussed how paracetamol is given to patients at the Sungai Buloh Hospital in Selangor.

“The patients need to have their meals before taking their medication, and most importantly, they need to have good nutrition to strengthen their body and give them the energy to fight the virus and recover faster, ” he says.

Jesvinder reveals that some of the patients from his village were elderly folks and they found it difficult to adapt to regular hospital meals because they are used to traditional Punjabi food like chapati. Moreover, they are also vegetarian. Furthermore, the village was 60km away from the hospital so it wasn’t viable for their family members to commute daily to send meals to them.

“So we were discussing how we could help, ” says Jesvinder. “And we decided to volunteer to provide free, tasty and nutritious food to them for two weeks (the average duration for a Covid-19 patient to be hospitalised).”

Initially, they didn’t have much funds for their venture – they pooled their own money to organise the first batch of free meals for their fellow villagers who were at the hospital in early January.

“We got a friend, Bhoopender Singh, who owns a Punjabi restaurant in Kuala Lumpur, to prepare and pack the meals, ” he says.

But it didn’t end there. Jesvinder and his friends also discovered that other patients at the hospital – regardless of their background, race or where they were from – also wanted the food and requested for it.

And his reply was: “Anyone who wants food, we’ll give. That’s our belief.”

As news of their charity effort spread through word of mouth and on Facebook and WhatsApp, other people from their village and even other villages began to volunteer and contribute funds to the initiative.

This enabled them to provide two meals a day and a more varied menu for both vegetarian and non-vegetarian patients. Each meal included carbohydrates (chapati or rice), fresh vegetables, a protein source, drinks (coffee, tea or juice) and a dessert (for dinner time). It was also specially prepared to be less oily, spicy and salty.

Jesvinder says that logistics was initially a challenge for them. Besides his full-time job, he had to coordinate the menu choices and logistics to ensure that the correct meal got to the correct building, floor and ward for each patient, and he’s often up until the wee hours of the morning. The food packets were prepared at Bhoopender Singh's restaurant in Kuala Lumpur.“I often had to drive over to the hospital to make sure the deliveries were done, check whether the patients had gotten the food and also, some of the patients would have been discharged so I had to ensure that their food deliveries were stopped too. It all had to be coordinated properly so that there wasn’t any wastage, ” he emphasises.

“Fortunately, I’ve an understanding boss who allowed me to do all this, and who even contributed to the effort, ” he says gratefully.

“Initially, I sent the food via Grab, but the destination wasn’t specific enough to get to the patient because the hospital covers an area of 0.5sq km, and food riders can only get to the main building, not to where the patient wards are, ” says Jesvinder.

So he got his taxi driver friend Delbir Singh to bring the food to the hospital, specifically to the building where the patient wards are.

“After talking to the doctors, they recommended that it’s better to have a form with the patients’ details like full name, IC number, contact number, building name, ward, floor and bed number, and vegetarian or non-vegetarian choice, to ensure that each food packet got to the right patient.

“Then our effort expanded further when patients started requesting for toiletry items such as soap, tissue paper and slippers, ” he says, adding that some of their family members lived far away and hence could not get those items to them.

“Sometimes, we had many patients so I also went to make the deliveries. But after doing so, I usually quarantined myself for several days. I would also go for a PCR swab test (which generates results in 24 hours), then only when I was confirmed negative, would I see my family, ” says Jesvinder, who is married and has two sons and a daughter.

“Although my wife and children were supportive of my charity efforts, they were concerned for me since I was also risking my health, ” he says.

The food packets were carefully placed in the right boxes for delivery to the correct wards.

From the initial plan of two weeks, the effort went on for almost a month (26 days) and they were delivering food for up to 35-40 patients daily. During that time, they also provided food packets to doctors and also Rela (The People’s Volunteer Corps) volunteers.

Recently, Jesvinder and his friends stopped the effort after exhausting their funds. They spent about RM7,800 on their food project.

“It’s encouraging because what we started motivated others to do the same – other groups, mainly associations, also started providing food to the patients at the hospital, ” he says.

“When you decide to help, make sure you have an effective action plan so that the food gets to the correct source. Don’t just do for the sake of doing, ” he says.