Adams got his breakthrough with the 1985 Longshot miniseries. Photo: Marvel Comics

If you are a fan of mainstream comic books, you’ll probably know the name Arthur Adams. Heck, even if you don’t know his name, chances are you’ve seen his art before.

Besides his superhero work, Adams also worked on a variety of other projects, and characters, including Godzilla, The Creature from the Black Lagoon and even Gumby, which actuallly won him an Eisner Award for Best Single Issue back in 1988.

Adams is also co-founder of Legend, a creator-owned comics imprint he formed together with the likes of Frank Miller, John Byrne and Mike Mignola. Through the imprint, Adams produced Monkeyman And O’Brien, which continued to make appearances in comics long after Legend closed down in 1998.

Today, Adams is still a notable presence in the comic scene, most notably through the highly detailed comic book covers he regularly provides for Marvel, DC, Image and Dark Horse.

Turns out meeting his comics hero Art Adams wasn't such a long shot for Kaleon after all. Photo: KALEON RAHAN

Having been a fan of him for a long time, meeting him was especially thrilling for me, and despite his legendary status, the man is extremely humble and has this uncanny mutant ability of making you feel like he is your best friend!

Anyway, the 30 minutes I spent with him will definitely stand out as one of my biggest milestones as a comics fanboy.

How did you learn how to draw comics?

I was a very arrogant young man and thought I didn’t need to go to (art) school and referred to other people’s comics and a lots of “How to draw...” books. I did have teachers and professionals who were very nice, who gave me helpful hints.

Sometimes I wished I had gone to school, not so much as I would necessarily know more about drawing but I would like to know more about art history. So that when people talk about famous artists, I wouldn’t look stupid like I usually do!

Adams got his breakthrough with the 1985 Longshot miniseries. Photo: Marvel Comics

Also in art school, I might get exposed to other mediums like different paintings, because I always wanted to paint but I never really learnt how to do that very well.

I do look back at my work (and cringe) all the time. (In fact) I did that on my work that I just did yesterday. I feel like I have learned a lot over the years and yet, there is a lot more that I haven’t learnt.

When I look back (at my work) years later, I wonder whose work did I look at when I drew this. Like, why did I draw such big feet?

I think its important that I try to be more like myself, even though sometimes I may be influenced by others. But I’ve certainly found out that over the years, my work has influenced others too.

After more than three decades in the business, what’s changed most for you?

When I was 19 (the age he first started in comics) and many years later, I could work all night and sleep all day. But I have a child now. The main challenge (now) is I have to get up early in the morning so my daughter can go to school and I can make her breakfast and lunch. So I have to be on a schedule right now.

I am very lucky because I don’t have to leave the house to work. But that makes me a very lazy person!

Mostly, I’m very fortunate that my work has been in demand. If I can draw three times faster, I still have too much work to do.

Also inside, I am not keeping track of time so I only feel like I have been working a little while... even though I look in the mirror and am bald and fat now, (as compared to) when I was skinny and had long hair.

Though he doesn't do many interiors these days, Adams certainly brings the thunder when he does. Photo: Marvel Comics

Will you ever do the interior of a regular title again?

It’s true that I spend a lot of time on covers and I hope I will be able to do regular work as well. But I am well over 150 years old (laughs), and I don’t know if I have time to draw a regular title!

If you do find time for that, can it be on Longshot?

No. I can’t promise that. If I do a regular title, it will be something I own. Could be Monkeyman And O’Brien.

That is an option. I have other ideas too, but that is a possibility.

Is X-Men-Teen Titans your ‘Holy Grail’?

That is an excellent comic book. Walter Simonson and Terry Austin taught me so much about drawing a team of super heroes. All the characters looked distinctly different and they behave differently. There were action scenes, where Walter could use all the characters, unlike some comics where only selected characters are featured. He did them so well.

A close second is Marvel Team-Up #79) where Chris Claremont, John Byrne and Terry Austin had Spider-Man meet Red Sonja. I loved Marvel Team-Up because you can read about Spidey and another guest character.

What’s your view on the comics industry today?

As a fan, I wish they wouldn’t keep changing numbers. I wish there weren’t four or five X-Men books every month, simply because they are very expensive now. Even I can’t buy everything.

I don’t want to read a comic book where I have to read five issues of just the same character. Sometimes, I want a bit of everything.

If you can appear in any comic book movie, which one and what role?

It would be a Fantastic 4 movie and I will be Galactus! Not the smoke version, although I can do that too. I’m that talented! 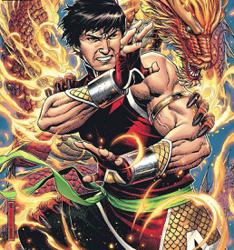