Some people are taking plastic surgery procedures far too lightly

A woman walks past a street billboard advertising double-jaw surgery at a subway station in Seoul, South Korea. Photo: AFP

She has big round eyes, a dainty nose and a pointed chin. It seems like it’s quite possible for an ugly duckling to literally change into a swan overnight after all as Lee Hee Danae had work done on her face to change her looks.

Not that she was "ugly" to begin with. The 15-year-old girl from China shocked the world with news of her extreme makeover, rising to fame on Weibo, a social media platform in China, amassing over 580,000 followers.

Her new features look suspiciously like a Japanese anime character and according to Chinese website cbg.cn, the plastic surgeries were an attempt by Lee to win back an ex-boyfriend.

Another shocker is Hong Kong actress Fanny Sieh, a natural beauty with a figure to match, whose addiction to plastic surgery led to her disfigurement today. Pictures of Sieh on Plastytalk.com shows how botched cosmetic procedures left her looking grostesque with a sharp chin, swollen lips and unnaturally large eyes.

According to a New York Daily News report, a "V-shaped face", narrow nose bridge and big eyes are considered the epitome of beauty in South-East Asia, thanks to the influence of South Korea's Hallyu pop culture.

Fifteen-year-old Lee Hee Danae from China underwent extreme plastic surgery for her face and body to win back an ex-boyfriend. Photo: Weibo

The V-shaped face obsession has sparked off a trend in double bone-cutting jaw surgery, which involves realigning the upper and lower jaws. This became especially popular after 2009, when a dental clinic in Seoul, South Korea, ran a major advertising campaign promoting the cosmetic benefits, the newspaper reported.

The trend has since spread to China, and is slowly being adopted by young girls in Malaysia and Singapore as well.

And the phenomenon isn’t unique to Asia either. Last year, Canadian daily The Province reported that “the slimmer, tapered face is gaining popularity in Vancouver”.

“The surgery, known colloquially as V-line surgery, is commonplace in parts of Asia and is increasingly in demand in Vancouver,” said Dr Gerald Wittenberg, an oral and maxillofacial surgeon, in the article. “Instead of saying, ‘I want to make the jaw line smaller,’ they say ‘Do you do V-line surgery?” he added.

While the old notion of beauty may have been based on the ideal of the sculpted Western face with big eyes and well-defined cheekbones, the current fad stresses on being “quirky”, which ironically, has many of the girls looking like they all came from the same cookie cutter mould.

In the Miss Korea 2013 pageant, for example, pictures of the 20 finalists were posted online on Reddit and many speculated that these women underwent cosmetic surgery. Predictably, they all had similar V-shaped faces and big round eyes.

Touted as the new capital for plastic surgery, South Korea even has a top-rated controversial makeover reality show called Let Me In. Since its pilot in 2011, women and men have come forward to plead their case for plastic surgery in front of a panel of experts ranging from cosmetic surgeons, make-up artists, celebrities to style experts.

Those who are chosen get a fully sponsored makeover, which includes plastic surgery. On a positive note, the show offers hope to candidates born with deformities who, with their newfound confidence, are finally able to leave their house without fear.

On the other hand, it appears to propagate a disturbing message that one needs to look a certain way to meet society’s approval of what’s physically attractive.

Park Sun-young, better known by her stage name Hyomin of K-pop girl group T-ara, admitted to having had cosmetic surgery during an interview with Sports Chosun.

Hyomin was quoted as saying, “Society has become really appearance-oriented lately. Our job requires us to give joy and entertain. It’s impossible to do that if you’re not pretty. There is obviously a part of us that want to be pretty, but because the public looks at our face, I think it’s possible to fix a few things as long as you’re not ‘greedy’ in order to live up to those expectations.”

In their quest to emulate their Korean idols, more and more young women go under the knife with little regard for the risks involved. A South Korean 23-year-old college student who underwent double-jaw surgery killed herself, reported AFP, after the procedure left her unable to chew food or stop crying due to nerve damage in a tear duct in 2013.

The influence of social media

The power of social media and selfies can’t be underestimated. Search for #vshape on Instagram and thousands of photos celebrating the V-shaped jawline will pop up. Most of them have been photoshopped, and some openly publicise their before-and-after surgery pictures.

Describing herself as a plain-looking introvert, Ang started entertaining thoughts of plastic surgery after her divorce in 2010.

Her post surgery photo reveals bigger, rounder eyes, a higher bridged nose with a sharper tip and a set of dimples stitched in.

“These self-portraits should not be taken lightly as it has a big impact on how women perceive themselves. Selfies go through a lot of editing and there is a certain expectation that surgeons can deliver the same results. In fact, many doctors in the United States no longer show patients projected computer images as the print outs may give them an unrealistic hope,” says consultant plastic surgeon Dr Mohd Ruslan Johan.

Medical director of Beverly Wilshire Medical Centre, Dr Mohamad Nasir Zahari, feels that Malaysian patients are still conservative as not that many patients ask to drastically change their looks, though the number is increasing.

“To be fair, there has been studies on global facial preference with data indicating V-shaped faces tend to be more attractive and in demand, especially in the modelling and acting industries. That’s partly why women want plastic surgery as they are influenced by celebrities. It gives them a boost of confidence; it’s a feel-good factor,” he says.

Some people are taking plastic surgery procedures far too lightly 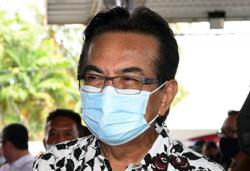