New kitten in the house: Inkie is a discreet tuxie. — Ellen Whyte

With Swooner gone, our home was very quiet. We humans missed him but it was Tic Tac who really suffered. Our kitten spent every night playing wild games with Swoon. They chased around the house, went out on the roof, and generally ran riot.

Target is 14 years old and while he played with our girl, it was an older boy amusing a kitten to be kind. Without her best friend, Tic Tac was bored.

It put us in a dilemma. We knew she needed company, but we are expats. With the pandemic, life is rather uncertain.

We hesitated. Talking it over, we concluded there is no knowing what will happen but then again, that's always true. It's just a bit more obvious in the pandemic than usual. As for the practicalities, if we ever need to move, then taking three cats is not much different than moving two.

So we scouted for a suitable playmate. We wanted a fairly young cat, as kittens are playful and also because youthful cats are easy to integrate. As a further consideration, the python is still around, so the newcomer would be a full-time indoor fuzzie. If possible, we wanted a kitty who wasn't used to going out and about.

Long story short, we hooked up with Inna, a Ukrainian rescuer on Petfinder, who let us adopt the sweetest little cat.

The newcomer is coal black except for a tiny white diamond on his lower chest, a stripe of white tummy fur, and one foot fringed with white tiptoes. From the top and front, he is a complete void, invisible in low light. But when he sits up or lies on his back, he shows off his tuxie glory. The kitten had never been in a cat carrier before, or a car. On the way home, he was petrified. Luckily, it was a five-minute drive. We put him in the spare bedroom, and left him to settle.

Frequent visits, each accompanied by a gift of tuna or a treat, brought him out from behind the curtain and into our laps. Having been reared by a loving foster mum, our newest family member proved super cuddly.

Tic Tac was dead curious. She was properly cautious about the carrier, associating it with the vet, but she smelled the kitten's presence. As soon as he relaxed, he also gave forth a rusty meow. Tic Tac hovered in the hall, fascinated.

Target was less impressed. He saw the carrier, heard the little meow, and drew the proper conclusions. I told him we were adopting a kitten for Tic Tac, and explained it would make her happy and ensure that he would no longer be pestered to play.

I reminded him how kind he'd been to Tic Tac and Swooner, and presented the idea that continued kindness would benefit him, as two occupied kittens meant more cuddle time for us.

Target listened, and walked off, grumbling. He was not convinced. Still, he didn't pee anywhere, so he was not feeling threatened. That was a good sign; at five months, the newcomer was young enough not to be seen as a competitor.

Twenty-four hours after the kitten arrived, we opened the bedroom door and invited the new boy to step out. Tic Tac was waiting in the hall, dead curious.

Being a sweetheart, she danced over and sniffed. The kitten flattened his ears and hissed. Poor Tic Tac was devastated. She was so small when she moved in, that she only remembers being the spoilt darling of the household.

As we comforted her, Target pitched up. At 14, he is a big boy with powerful shoulders and lots of muscle. More than that, Target is an excellent fighter. On the street, he is fearless at taking on any tom that dares enter his territory. Also, he's whapped cats bigger than him and sent them scrambling for cover.

Although Target has been kind to incoming cats in the past, bringing in a new cat is always a toss-up. Especially if the new kitty is a boy.

When the kitten spotted Target, he flattened his body and ears, trying to be invisible. Then, hesitantly, he hissed. As Target drew himself up, we all held our breath. One whap of the mighty paw would knock the kitten into next Tuesday.

But the senior cat sniffed the air, narrowed his eyes, shot me a glare that conveyed his disappointment in me and exited, growling.

Tic Tac was shocked at all the bad temper but we humans were relieved because there was no whapping, no hackles, and no screaming. Given everyone was civilised, we let the cats mingle.

As the kitten discovered the staircase and went to explore, closely followed by Tic Tac, we tried out names. With the help of Facebook friends, we toyed with dozens, from Mephistopheles to Sooty. He was Cygnus for a day, named after the galaxy and the black hole, but it didn't suit him. After a rethink, we named him Inkblot, or Inkie for short.

While we debated, the cats spent their first day together playing peekaboo, with Inkie sniffing around and hiding whenever Tic Tac came too close. In the evening they had dinner, but with bowls far apart.

The next day, the cats upped their game. Target stayed upstairs, refusing to be near the newcomer, and demanding compensatory treats. But Tic Tac was bouncy and smiley as she followed the kitten around.

Our girl was generous sharing biscuits and her best cushion, but she darted over when Inkie touched her climbing pole. The kitten flattened his ears, hissed and backed off when she came too close but when Tic Tac scratched the pole and then climbed up, his little yellow eyes gleamed with wonder and excitement.

Now Tic Tac appears the delicate princess but under the silky fur and exquisite blue eyes, she has the body of an Olympic gymnast. Rippling with muscle, she hauled herself up, casually flipping from one station to another. Cirque du Soleil would die to have her.

Totally impressed, Inkie stuck all his kitten claws in the rope and climbed up. As he crowed in triumph, Tic Tac reached down and touched him on the ear. Inkie pawed her back and then they meowed with excitement as they play-battled.

Having counted coup, Tic Tac jumped down, sailing elegantly through the air as Inkie scrambled after her. Bouncing on stiff paws, tail bushed like a toilet brush, Tic Tac squeaked her defiance. Inkie stopped, hesitating for an infinitesimal moment, and then fluffed up his tail. Squealing like a Halloween witch's familiar, he raced after her, tapping her on the bum and then shooting off.

It's one of the great mysteries of science, but somehow two tiny featherlight cats can imitate a thundering herd of elephants. Fully in the game, they ran up and down the cat trees, sailed across the floor on the rugs, and finally landed in a panting heap.

Tic Tac looked a little nervy as the kitten landed on her but as we quickly produced treats, Inkie was so excited about the food, that he headbutted her. Our princess instinctively licked his ears and that sealed the deal: from that moment, the kittens were solid friends.

Inkie has been with us for 10 days now and Tic Tac just can’t stop smiling. Getting her a kitten was definitely a good decision.

Target has stopped growling but he's still on the fence. Thankfully, I bought a megapack of cat treats. One hundred and six sticks. Let's hope it's enough as a peace offering.

Cats are social by nature. In the wild, feral colonies consist of three or more generations of females living together. Younger males stay too, as do some old tomcats, but boys do tend to move around from one colony into another. 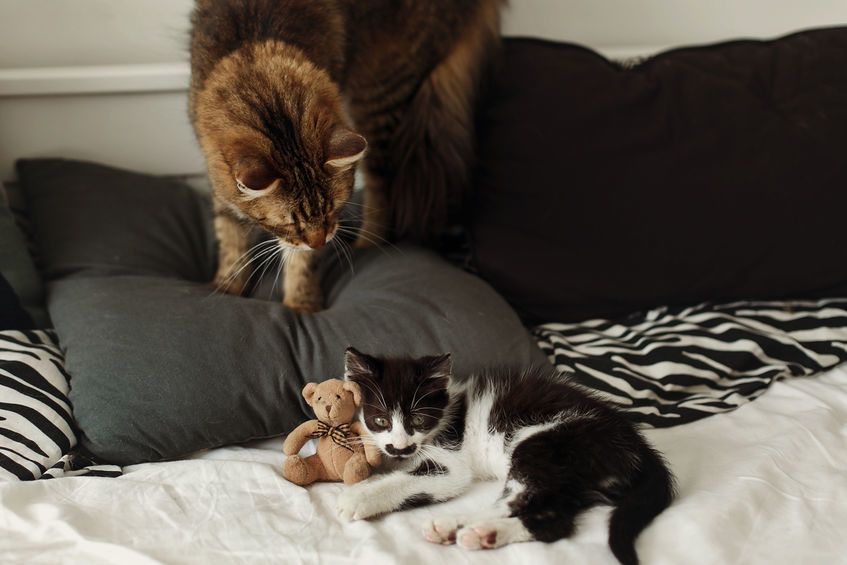 Adopting a companion cat for an existing cat is tricky and can be stressful. Patience is the key. Photo: 123rf.com

If you are adopting a cat, two kittens from the same litter is better than one. If you have the resources and the space, three is also excellent.

Adopting a companion cat for an existing cat is tricky. As we have interfered in cat society, some cats are not experienced in living with other cats. Bringing in a newcomer can be very stressful. Also, some cats never learn to get along.

But if you have a young cat like Tic Tac who needs a companion, the easiest way to integrate a newcomer is to adopt a kitten aged between two and six months. Bring in the newcomer and set them aside in their own room for a day or two. Let the cats sniff each other under the door.

If there is aggression, feed both kitties at each side of the door. That way they associate the other cat’s scent with food but the closed door stops them fighting. When they appear calm, introduce them by opening the door.

Note: Having one cat in a cage is not a good idea as that kitty will feel boxed in and helpless. It may condition your cats to view each other with aggression. Each kitty must be autonomous and free to move away if they want.

Some cats are very friendly and will make friends by themselves over a day or so. Others need supervised meetings that last a few minutes at first, and that are then slowly lengthened over the period of a week or so.

Mostly, be patient. Cats that are anxious tend to whap before they think. So slow is better than fast.

Love language of cats: Slowly blinking and rubbing your scents

Your cat might be too fat – here's how you can tell

Katz Tales: Beware of snakes in the neighbourhood - one killed my cat

Dear Thelma: I feel guilty about breaking up with my ex-girlfriend
Climbing temperatures have wrought major changes to ocean stability faster than previously thought
Amsterdam unveils its largest bike garage, and it's underwater
INTERACTIVE: Funny bunny facts for the Year of the Rabbit
Russia's conflict diamonds: Who profits most from the ongoing trade?
Ukraine's Odessa wins Unesco status despite Russia opposition
Graves sink and fisheries shrink as a result of climate change in Fiji
Venice of Africa threatened by severe flooding due to climate change
Berlin homeless charity: Needs are soaring but donations are dwindling
This German football fan decorated her whole home in her team's colours