It may not come as a surprise that the winner of this year’s World Barista Championships is Australian, as the country is known for its high standards when it comes to a good brew.

Anthony Douglas, a 31-year-old barista from Melbourne, was crowned the winner of the 2022 edition on Friday, beating five competitors from Britain, Canada and the US, among other countries, in the final of the competition that was held as part of this year’s Melbourne International Coffee Expo (MICE). Australian Anthony Douglas has been crowned the 2022 world's best barista, thanks to his honey-hibiscus creation. – Photo: Specialty Coffee Association /dpaDouglas served three original creations based on a Colombian coffee whose beans were fermented anaerobically, i.e. in the absence of external oxygen, for 80 hours.

The highlight of his 15-minute presentation, however, was his signature drink: espresso combined with lacto-fermented passion fruit, Colombian honey and cold-brewed hibiscus tea.

For his creations, the young barista uses modern techniques such as cryogenised milk - a method that concentrates the flavour through pressure and slow heating.

A Melbourne native himself, Douglas has been working as head barista for Axil Coffee Roasters, which has several coffee shops in the Australian city, since 2014.

The World Barista Championship are the most important coffee competition worldwide and are organized each year by the World Coffee Events organisation in another city across the globe, with the aim of promoting good quality as well as valuing the barista profession.

Each year, some 50 professionals from around the world compete for the best brew. This is the second time that the World Barista Championships have come to Melbourne, sometimes dubbed Australia’s coffee capital, with the first event held in 2013. 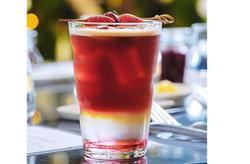