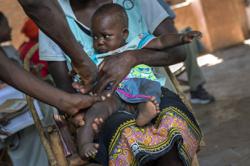 It's time we do more to prevent chronic diseases such as hypertension. We know their root causes but we don’t address them well. — AFP Relaxnews

For over two years now, we’ve lived with Covid-19, ever watchful we don’t get it. Well, the virus isn’t going away so maybe it’s time to look at another invisible epidemic that actually kills more people: chronic diseases.

Chronic diseases – such as heart disease, stroke, diabetes and cancer – cause 70% of deaths and cost RM9bil in productivity losses in Malaysia. Cases are often picked up late, when treatment is costly and less can be done. It’s a silent epidemic, unfolding quietly and slowly over years.

Covid-19 put a spotlight on chronic diseases – together they created a deadly “syndemic”, as The Lancet medical journal put it. Many dying from Covid-19 have a chronic disease. Some of the sickest have included those who had undiagnosed, untreated chronic diseases.

Isn’t it time we do more to prevent chronic diseases? We know their root causes – poor diet and lack of physical activity (which combine to cause obesity) and smoking – but we don’t address them well.

Some countries have responded by raising taxes on tobacco and sweetened beverages and enacted legislation on food labelling and marketing.

“There is no enforcement on calorie intake” in eateries, school canteens and restaurants in Malaysia, she says. And while we tax cigarettes (a proven measure elsewhere), every other cigarette in Malaysia is an illegal one that has circumvented taxes and is sold cheaply.

A deeper, underlying factor is poverty. Most people with chronic diseases in Malaysia are poor, and they become poorer as they get more sick.

In her research, Dr Sharifa Ezat found many low-income families face difficulty in being able to afford good foods and instead are buying cheaper foods, especially rice, so their children will feel full. This is causing obesity, while some children also suffer from stunting and wasting. Another study on the urban poor in Malaysia found most low-income families could not afford fruits.

“We found that if the mother is obese because of a trend of eating high carbs, the children would likely be obese,” she says.

And with little time or money to spend on doctors or health, many have undiagnosed hypertension, heart disease or diabetes. “They may be self-employed and cannot take the time off to go to a clinic,” she explains.

Chronic diseases are also known as noncommunicable diseases or “lifestyle diseases”. At one time, local health advertisements called for people to adopt a “healthy lifestyle”. But when poverty pushes you to choose cheap, processed foods and does not give you the place or time to exercise or see a doctor, that’s not about “lifestyle”.

She suggests offering a food basket for malnourished children that must include protein (such as milk or eggs) which they severely lack. A similar scheme assisted many children to achieve normal nutrition but was halted for various issues – one was that some fathers sold off the food. A school milk programme also aims to reach the undernourished – it should be continued for rural children.

The health protection scheme, Peka B40, offers free health screening to people from the B40 (lower income) group and a payment incentive for some treatments, but pre-Covid, many of those eligible had not taken it up. Perhaps the hours of opening or location of the clinics were not convenient (so access and coverage should be expanded); perhaps awareness was an issue. Sadly, such ventures often fail to fully consider the target group’s situation.

We need to get more creative. And we need to put more money into prevention rather than treatment (in hospitals). We should remember: an ounce of prevention is worth a pound of cure.

The bulk of Malaysia’s current health budget – 60% – goes towards hospitals, but more could be given towards preventive and primary care, says Dr Sharifa Ezat. (Primary care refers to the first level of care, or first contact with health services, which is usually the Klinik Kesihatan, or public health clinic, for the poor in Malaysia.)

Prevention activities could take place at this level, such as offering useful health advice or checking blood pressure or glucose levels. But most of these clinics are overwhelmed by patients, staffed by inexperienced junior doctors, and offer only basic medications. Specialists are rare. But dieticians or sports therapists may also be what is needed. Dr Sharifa Ezat says staff could be trained in nutrition, for example, to help patients tackle obesity.

Private clinics could be included to provide care for the B40 group, in a good example of how social assistance can be expanded.

Ultimately, we need to rethink health. We need to reshape our whole approach so we can go from illness to wellness.

We are facing our own possible extinction, yet coolly doing little about it

Dog, missing for two months, found alive inside cave
If it's very hot, try watering your plants gently, a sip at a time
What is the 'bar' part of Gordon Ramsay Bar And Grill KL like?
Make your vote green, keep environmental issues on the radar screens of politicians
Fossil of new armour-plated dinosaur species discovered in Argentina
My Pet Story: Little wonders, these tiny little snails
Do spiders sleep? Scientists study baby jumping spiders to find out
GE15: Will Malaysia's next general election have a green agenda?
'Stranger Things' cafe in Tokyo lets you eat Demogorgon pasta, Eleven's waffles
In Malaysia, we live in a culture that is very hostile to the poor