According to nationaltrust.org.uk, Palladianism was an approach to architecture influenced by famous 16th century architect Andrea Palladio (1508-1580).

The Venetian architect was responsible for a series of churches in Venice, public buildings in Vicenza and villas in Veneto, all in Italy.

Palladio’s work was strongly based on the symmetry, perspective and values of the formal classical temple architecture of ancient Greeks and Romans.

The exteriors of Palladian buildings were often austere, but inside, elaborate decoration, gilding and ornamentation were the order of the day. The spiral staircase is believed to be the tallest Fleur de Lis design in Malaysia.

“This building has decorative and ornamental elements of neoclassical architecture, characterised by grandeur of scale, simplicity of geometric forms, Greek – especially Doric and Roman – details, and dramatic use of columns,” said Michael Chan, the owner of the building, which is also known as the Arlene House.

A trademark design of the building is the decorative stylised Fleur de Lis (French Lily) design on its parapet wall.

Also known as the Saracen Foundry, it was the most important manufacturer of ornamental ironwork in Scotland at that time. All the components of the staircase were shipped from its foundry in Glasgow to Ipoh and built on-site by a team of Scottish installers and engineers.

The ornate spiral staircase was also crafted with the stylised Fleur de Lis design, and is believed to be the tallest of such design in Malaysia. 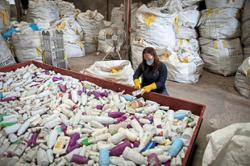