By AGENCY
Photos By AFP

A labourer showing crystals of salt on a salt pan in the Little Rann of Kutch (LRK) region near Kharaghoda village, some 150 km from Ahmedabad. – Photos: AFP

Roshni Thakor left school to harvest salt from a sun-baked Indian desert, a backbreaking trade practised by her ancestors for centuries but now threatened by climate change.

For eight months every year, farmers toil in scorching heat to pump out briny water from handmade wells in a sparse corner of western Gujarat state.

A tonne of the resulting salt crystals fetches the meagre sum of 300 rupees (US$4), but unpredictable rainfall, rising temperatures and frequent dust storms have slashed yields, and made it harder for Thakor and her family.

"It's getting hotter and hotter here. My eyes burn and I often feel dizzy and sick," the 20-year-old told AFP, as her mother prepared tea over a wooden stove.

Erratic weather has brought mounting losses for her family, but her father Raju says they must keep trying to eke out a living from their four salt pans.

"I have no choice but to keep working here as I don't own any agricultural land. I don't have any other source of income," he said.

India is the world's third-biggest producer of salt and nearly three-quarters of its annual output comes from Gujarat.

The Thakor family are among the tens of thousands of "Agariyas", or salt farmers, who spend most of the year living and working within the barren mudflats of the Thar Desert.

They dig 50-foot wells with shovels and their bare hands before using diesel pumps to direct water into large rectangular basins, where it evaporates and leaves salt crystals behind.

The work is both tedious and taxing. Farmers prepare the basins by stamping their bare feet to seal in the brine and stop it from seeping back into the earth, a process that leaves them vulnerable to painful foot infections. 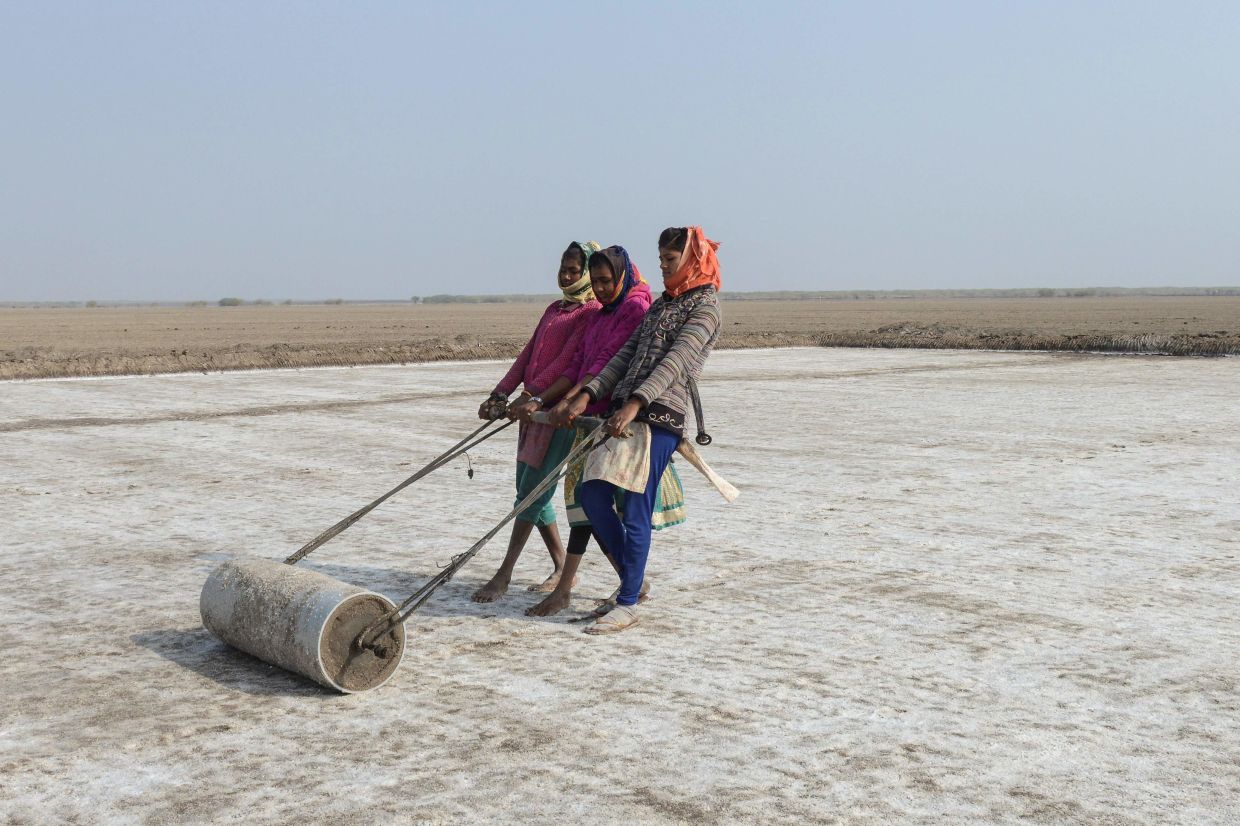 Labourers pulling a roller to level the land on a salt pan at the Little Rann of Kutch (LRK) region near Kharaghoda village.

'We have to start all over'

Heat plays an important part in the process, with 24 degrees Celsius the optimal temperature for the formation of salt crystals, Raju said.

But climate change is making it harder to plan for the salt harvest and is delaying the onset of the farming season, in addition to bringing unbearable heatwaves to those working the desert lands.

"Salt production needs dry weather – if it rains suddenly, all our effort goes down the drain," said Raju Thakor. "The salt dissolves and we have to start all over again."

The same government report warned that India faced a 4.4-degree rise in average temperatures by the end of the century.

Dhvanit Pandya, who runs a local salt farmer advocacy group, says the mercury has already risen by that much in the Thar Desert over the past decade, with daytime maximums now sometimes topping 54 degrees.

"The traders slash the price by half if the salt is not of good quality," Pandya said.

Pandya estimated that farmers were now losing a quarter of their harvest each year because of sharp changes in weather patterns, pushing many families towards poverty. 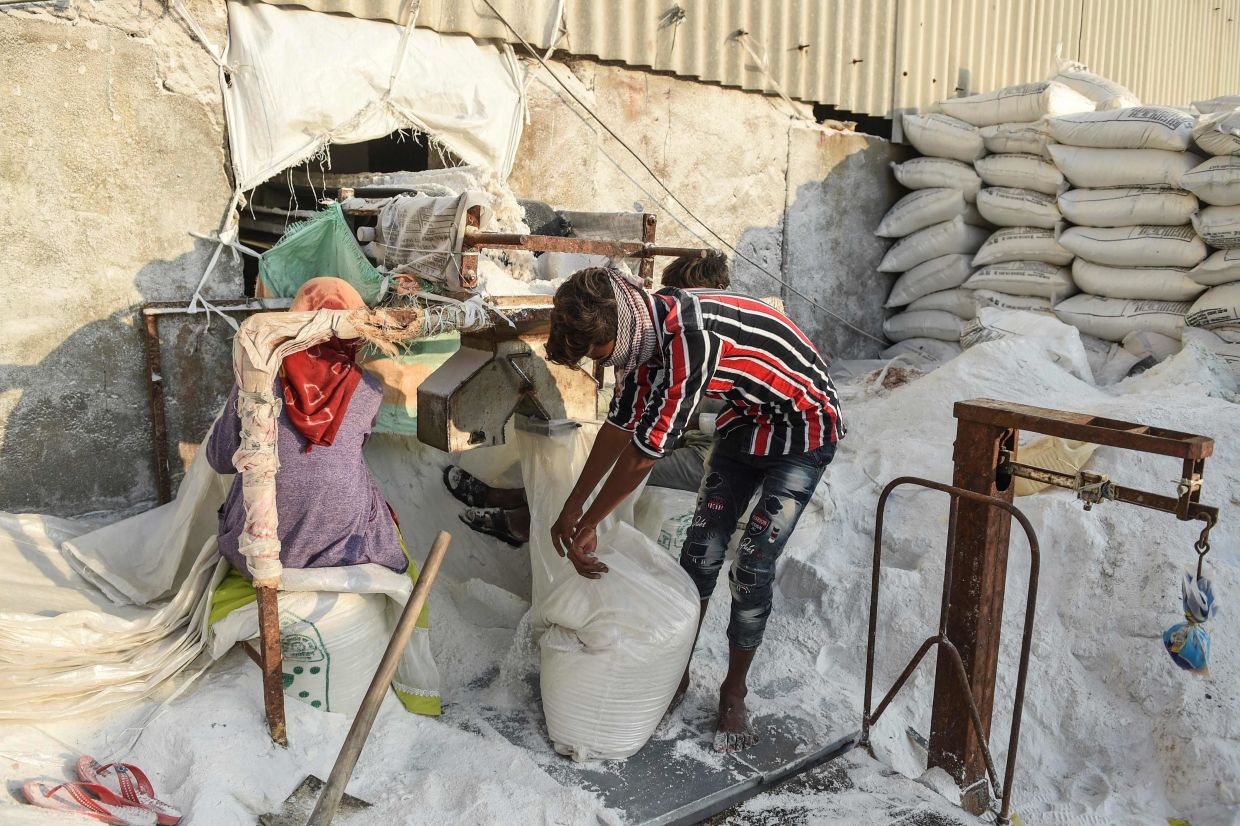 Labourers working at a salt farm, where the work is both tedious and taxing.

'We can barely make ends meet'

The Agariyas say their ancestors have farmed salt in the region for more than 500 years.

Their homes in the Gujarati desert, far from the state's population centres, are not connected to the electricity grid.

Fresh water in the desert is scarce, and the community's children spend most of the year out of school.

A government initiative launched nearly a decade ago helped some salt farmers replace their diesel pumps with solar-powered motors to help lower their production costs.

Pandya has credited the scheme with helping "slowly but surely" improve livelihoods.

The desert community is tight-knit, communicating across distances outside of shouting range by using mirrors to flash reflected sunlight at faraway shacks.

Most farmers there say they don't want to give up their trade, but acknowledge the work is becoming more difficult as the weather changes.

Tejal Makwana told AFP she used to save nearly US$700 from each farming season – more than enough to provide for her family for the rest of the year.

"But now we can barely make ends meet," she added. – AFP

Cooking the Books: This is the time for feel-good food
Rail-side gardening blossoms during pandemic
Show your colours: Understanding how walls shape a room's atmosphere
Gen Z, their hobbies, and jobs of the future
World's northernmost forests also under threat from climate change
Relationships: What should you do if your adult kid won’t get in touch?
Revenge of the 'granny plant' and the rebranding of plants
Bolivian wine-growers banking on 'distinctive' altitude flavour
Growing mushrooms on coffee grounds - the new pandemic hobby?
What a buzz: Saving Malaysia's bees, one nest at a time