Human Writes: We can’t lower our guard against Covid-19 yet

With highly infectious Covid-19 variants appearing in Malaysia, testing needs to be ramped up so an infected person can be quickly isolated. － FAIHAN GHANI/The Star

“Oh it’s only lunch!” That was the retort made when an older relative declined lunch with a friend recently. One week later, that friend was in hospital with Covid-19.

I don’t want to be a scaremonger. But I feel duty-bound to sound an alarm now. More than ever before, we are entering dangerous territory with the pandemic in Malaysia. That meet-up with friends, that birthday party, that shopping jaunt for fun – it all just got more dangerous.

In this war with Covid-19, the virus now has a new weapon: variants.

Nine cases of the more transmissible B1351 variant have been detected, the Health Ministry announced on April 1, 2021. This is the variant first discovered by South African scientists. (I refuse to call variants by countries – countries doing the work to identify a new variant should be congratulated, not shamed.)

This variant is said to be 50% more transmissible. It also has that “Eek” mutation (officially called E484K) enabling it to evade antibodies. There are concerns how that might impact vaccination.

So how did it enter Malaysia? Genomic sequencing of cases from a Jalan Lima, Kuala Lumpur, cluster traced the likely origin to two employees at a company located at the Kuala Lumpur International Airport. This news should trigger alarm bells. The government needs to pivot to a more aggressive approach. We need more testing to control transmission, a faster vaccination drive to protect more people, and more random genomic sequencing, especially of cases in large clusters.

B1351, which is linked to higher viral loads, can spread fast. In Zambia, after months of low case counts, Covid-19 cases suddenly shot up 16-fold in mid-December when B1351 was detected there.

Another highly contagious variant is B117. Two cases have been found here; they were isolated and contained. But it’s probably only a matter of time until it surfaces again.

Worldwide, variants are causing havoc in many countries – Brazil is staggering with the P1 variant while the B117 variant, first detected in Britain, is now ravaging Europe.

B117 is 60% more transmissible and 64% more deadly than the original virus. And it’s infecting more children. B117 is now dominating many countries – in Germany, it accounts for 90% of cases. In France, it has led to intensive care peaking – and it’s not old people filling up the wards but younger patients, often with no underlying medical conditions.

Meanwhile, American public health experts are calling for caution, horrified that B117 has been found in every US state. Despite a strong vaccination drive, Covid-19 infections there are rising.

Variants are to be expected: RNA viruses mutate constantly. The more they transmit, the more they mutate. So as transmission rises, expect more variants. There could be a new variant evolving near you. We won’t know if we don’t test.

That’s why we need more genomic sequencing. It’s critical to contain potential new threats. So far, full genome sequences of 261 samples have been analysed. We need to ramp up regular testing too. In Worldometers (worldometers.info), if you list countries by tests done per million people, Malaysia is pretty low – number 102.

In January this year, 46 health professionals wrote an open letter to Prime Minister Muhyiddin Yassin calling for more testing. (The Prime Minister acknowledged the letter and said laboratory capacity had already been increased.)

But since late January, we’ve been doing less testing. The less you test, the fewer cases you pick up. There are also backlogged tests. Ideally, anyone suspected of having Covid-19 should be tested promptly with a rapid turnaround for results so if infected, they can quickly isolate. These tests need to be easily available. Only then can we stop infection spreading.

There is now large-scale community transmission here, as the World Health Organisation said in a recent report on Malaysia. This was inevitable. With Google reporting a rise in population movement and upcoming festivals, the WHO called for “continued vigilance”.

In short, the virus is “out there” now, beyond containment, and silently spreading. Half of all Covid-19 infections are asymptomatic. Vaccination must be speeded up.

We also need to ask: why have there been so many clusters at detention centres, workplaces and education centres? These places need to have testing policies in place and easily available tests so any outbreak can be quickly detected and controlled. Otherwise, we’re just going to see more clusters and more spread of disease.

Cramped working and living conditions for workers, particularly migrant workers, are problematic – they make social distancing and quarantining difficult. MP Charles Santiago has said it is high time the problem is addressed and suggests infected workers be isolated in “recovery facilities”.

Too many family gatherings, birthday parties and meet-ups are also turning into “Covid-19 parties”. I too dream of dinner in cosy restaurants, with many friends and no masks. But the time for that is not now. In this war with the virus, now is not the time to lower our guard.

Human Writes: Get your Covid-19 lifejackets on, people, the water's rough

Human Writes: Whither global solidarity in the face of Covid-19? 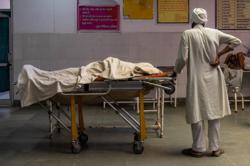