Anya Taylor-Joy as chess prodigy Beth Harmon in 'The Queen’s Gambit', a TV mini series that is well-written, well-acted, presented skilfully, and – importantly for our chess-playing columnist – gets the chess almost always right. — Netflix

The Queen’s Gambit is a chess opening, where the player with the white pieces offers a pawn sacrifice almost immediately. It is my favourite opening when playing white, especially if the sacrifice is accepted, because it usually means an exciting game is on the cards.

The Queen’s Gambit is also a television series currently (November 2020) trending on Netflix, and since it’s a show about chess written and directed by Scott Frank (who also wrote Get Shorty, Out Of Sight and Logan, all of which I enjoyed), it was something I was looking forward to.

First up, let me get straight to the point: It’s a really good TV show. It’s well-written, well-acted, presented skilfully, and – importantly for me – it gets the chess almost always right.

The show is about a young girl named Beth Harmon, a prodigy who learns how to play chess as a nine-year-old and then learns about growing up in order to take on the best players in the world.

It’s a story that appealed to me because I too learned how to play chess at a young age, although more as an “eager youngster” than a “budding genius”. I took it seriously enough to read books like Simon Webb’s influential Chess for Tigers, and studied the games of my chess heroes – including the most exciting one: Mikhail Tal, the “magician from Riga”.

Tal was an exciting player from Latvia who was World Champion in the early 1960s, and he was the guy who would make glorious sacrifices on the board to create overwhelming attacks. They weren’t technically the best moves to play at the time, but the chaos he sowed by creating complex positions was usually too difficult for most opponents to handle.

I wanted to be able to play like Tal, and when I was young, the opportunities to do so were there. Children’s chess games are full of mistakes and thus well-suited to the swashbuckling approach of sacrificial queens and all-out attacks.

My enthusiasm meant I was good enough to represent my school. I remember being driven around Kuala Lumpur with the other team members by my school’s vice-principal, playing games at other schools. I vaguely recall him treating us to lunches at a fast food restaurant, which arguably was just as fun as playing the games.

The TV show has Beth going to local tournaments, with its row of parallel chess boards and ticking chess clocks, and it seemed a little familiar. But she seems very intense in her games, whereas I remember it as a way of skipping school to do something I liked.

For some reason, my secondary school had no official school team, and even the club was a sporadic weekly afternoon with around half a dozen players at most. But I kept reading books (the Internet wasn’t really a big thing then) and kept learning theory.

What I discovered was that I really wasn’t good enough to play like Tal. Specifically, I would start to create these open games (think King’s Pawn openings, rather than Queen’s Pawn), and then it would get complicated really quickly. Too quickly, in fact, and before I could mount my glorious attack, I would find my king in too much trouble to do anything but defend.

And so I moved to playing Queen’s Pawn openings. The games were slower to build to a crescendo but what I realised was that I could take that time to not only keep my king secure, but also set up pieces that were ready to spring into action.

I don’t really know how to explain it. When you’re on the attack, your heart beats that little bit faster and you get very focused on the game. I’ve found that it is more enjoyable playing as an aggressor with an unsound attack than it is to defend under pressure even though you have no apparent weaknesses.

The fictional Beth too is lauded for being an instinctive, attacking player. She too has to learn how to temper her aggressive nature to play better, and in the climatic game, instead of her familiar King’s Pawn opening, she opts for – you guessed it – the Queen’s Gambit.

When I got into university, I started playing more seriously again. I joined a university team and played boards five or six in a six-man team (meaning I was only the fifth or sixth best player) against local clubs (I hasten to add that this was a team of players from the university rather than the best players the university had at the time).

I remember my captain once watched me play my games in between his moves on board one. He told me later he was jealous about the kind of moves I could get away with. The kind of exciting, glamorous moves where I sacrificed pieces to break through a defence, because, he said, if he tried to do that on board one, he’d be wiped out immediately. Basic-ally, I was only able to have fun in my games because I was actually quite bad at chess.

Of course, the heroine of The Queen’s Gambit doesn’t ever play on board five or six. And the point of her story certainly isn’t that you can only enjoy chess when you’re bad at it. But where our two stories intersect is that it is important to find balance in what you do.

I still play chess now, although it’s almost exclusively online. I still struggle to find a balance between fun play and playing “sensible moves” (I seem to flit between the two).

I also know an eight-year-old who has picked up the game. Sometimes when I watch her play, it’s all I can do to not point out the really horrendous mistakes she makes on the board. I want to lecture her about the “three questions” you ask yourself before any move, and not to bring out the queen too early.

And then, the other day, she won a game online. Her queen infiltrated past the back rank and chased the enemy king into a corner, and checkmated him by herself.

And I thought, yes, that does look like fun.

Contradictheory: My secret to losing weight (it's not what you think) 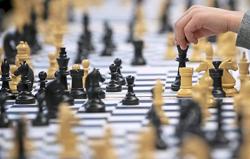