File photo from Perhilitan of an injured Malaysian tiger rescued from a poacher’s trap in Perak.

Tiger numbers in all 13 tiger range countries in the world fell steadily for decades – until 2012.

In 1970, tigers numbered some 40,000 around the world; the number then plummeted to about 3,200 in the 2010s and three subspecies – the Balinese, Caspian and Javan tigers – became extinct.

However, in 2012, Bengal tigers in Nepal and India increased in number, adding to an estimation of some 3,900 animals globally.

The small Himalayan country of Nepal managed to almost double its tiger population to 235 wild tigers in 2018 from just 120 in 2009, putting it on track to becoming the first nation to see such an increase since 2010.

The good news is a result of Nepal implementing better protection for the animals, including raising the number of rangers monitoring poaching.

Close-up of a paw of the tiger pictured above. Wildlife officers are removing a wire from the trap that had cut deeply into the tiger’s forelimb.

According to data from India’s National Tiger Conservation Authority, tiger deaths numbered 100 last year, an improvement from 115 deaths in 2017 and 122 deaths in 2016.

So, should Malaysian authorities look towards Nepal and India for its all-important fight against the dwindling numbers of the Malayan tiger?

That is a lot of illegal profit for poachers, who mostly infiltrate into Malaysian borders from Indochina.

“Poaching is the number one threat to our tigers besides forest fragmentation and degradation, and habitat loss,” says Norizan, adding that it not only threatened the big cats but also their prey such as the sambar deer, the gaur and even the kijang.

“So there’s a slight difference, but we believe that there are some local people acting as intermediaries as well (for the foreign poachers),” she says.

Unfortunately, Norizan says the methods employed by these poachers are totally indiscriminate, as they lay snares that trap other animals apart from the tigers.

Perhilitan’s (Wildlife and National Parks Department) statistics show that almost 3,000 snares were destroyed in 479 operations carried out between 2014 and July 2018; the department has vowed to increase penalties for poachers in an amendment to the Wildlife Conservation Act.

Last year, Water, Land and Natural Resources Minister Dr Xavier Jayakumar told reporters during a Global Tiger Day event that he was seriously considering bringing a shoot-on-sight policy against wildlife poachers to the Cabinet for deliberation, adding that he had also instructed his officials to immediately have a meeting between the army, police and Perhilitan on collaborative efforts.

However, there is, as yet, no word from the ministry on any extra deployment of anti-poaching personnel. The minister declined to comment for this article.

Although these units have no enforcement powers, Dr Darmaraj hopes that their presence will, at least, deter the poachers; however, he warns that Project Stampede cannot be a “cure” for the crisis.

“At most, we are buying time because without specialised armed tactical teams with enforcement power in place to rapidly respond to track and apprehend foreign poachers, we will lose this fight.

“Only if we enable more enforcement boots on the ground and step-up intelligence on wildlife poaching and trade syndicates that lead to arrests and prosecution will we be able to save our national icon.” 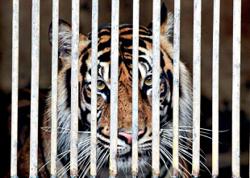