True or not: Timber certification claims to make logging eco-friendly

For tropical hardwoods, the trees must be at least 60cm in diameter before they can be chopped down under the Malaysian Timber Certification Scheme. - MTCC

It is the late 1980s and images of Penan tribes blockading logging roads in Sarawak have gone round the world. In the West, there are calls to boycott tropical timber for the harm it does to the forests and native peoples, especially after the landmark Earth Summit at Rio de Janeiro in 1992.

One response was to have “forest certification”, so that logging could, in theory, be more eco-friendly and indigenous people would be consulted about logging, so that they could also benefit from it.

The idea was that “sustainably managed” forests would uphold certain environmental and social standards through a mechanism to monitor, trace and label timber and wood products, said Dr Adrian Choo, Responsible Forestry Manager with WWF-Malaysia.

In exchange, countries in the West would keep importing tropical timber, and even pay higher prices for this eco-friendly wood.

Logging has had a destructive image, as seen here at Merapoh, near Taman Negara, Pahang, in Nov 2017, which made residents worry that it will harm eco-tourism in the area. Photo: Bernama

Different forest certification schemes were developed, including the international Forest Stewardship Council (FSC) and Programme for the Endorsement of Forest Certification (PEFC) as well as the local Malaysian Timber Certification Scheme (MTCS – see story on A timber trip).

So basically, there are both global and local rules so that logging does minimal damage to the environment. Which system should be adopted? And do they work in real life?

Professor Dr Maketab Mohamed, immediate past President of the Malaysian Nature Society, said that the problem with MTCS is that it’s “voluntary” and, so far, applies only to federal-controlled forests in Peninsular Malaysia.

“But state lands are a different matter,” he added wryly.

This may explain why there have been so many reports in the media against logging by kampung folks and the orang asli, as often highlighted by NGOs such as PEKA (the Organisation to Protect Malaysia’s Natural Heritage) and COAC (Centre for Orang Asli Concerns).

“Destructive logging at so-called hutan simpan kekal (permanent forest reserves) are still being carried out, showing that the word kekal (permanent) is rather more temporary when it comes to forests,” said Maketab.

The orang asli near Gua Musang, Kelantan, mounted timber blockades against loggers in late 2016, but their rights over forest lands were not recognised. Photo: Filepic

“What happens is that the forests are simply stripped of their ‘protection’ by a stroke of the pen (officially called “degazettement”) and clear (total) cutting is then carried out. Then the area is converted into oil palm plantations.”

Choo explained that in Malaysia, forest certification is adopted only on a voluntary basis (though forestry authorities do promote it). “However, there are still issues of native customary rights (to lands) and aboriginal reserves. It’s hard for MTCS to solve land ownership issues.”

Choo noted that Malaysia had the highest rate of deforestation from 2000-2012.

MTCS is run by the Malaysian Timber Certification Council or MTCC. Its 2016 Annual Report noted that only 28% of Permanent Reserve Forests in Malaysia are certified under MTCS, which means that the majority (72%) of forest reserves are not covered.

For the areas that are covered by MTCS, the standards look good on paper. But are they really followed in the field? Do loggers take shortcuts when enforcement officers are not looking, or as they say, “looking the other way”?

Choo said that those who are certified do follow “most of the standards in the field”. But even then, some do not, which is why the MTCS certificates for the states of Johor and Kelantan were suspended in 2016.

Dr Colin Nicholas, COAC coordinator, said that orang asli groups pulled out of MTCS because it was not genuine. - Filepic

For Dr Colin Nicholas, coordinator for COAC, the standards themselves are questionable. “MTCC began in the 1990s because of the bad reputation of tropical timber. The timber blockades by the Sarawak natives were affecting Malaysia’s image,” he recalled.

He recalled that when it was formed, MTCC was mainly funded and controlled by the government.

“Back then, the MTCC office was in the Gerakan (political party) building (in Cheras, KL). Don’t forget that the Minister in charge of logging (under “Primary Industries”) at that time was Lim Keng Yaik, who was also President of Gerakan. It was only after we and others made noise that the office was moved elsewhere.”

Part of the MTCS rules is that the indigenous people of the forest are supposed to be consulted about logging in their area. “But take the logging in Kelantan. The MTCS auditor went to an area and randomly asked some orang asli he saw about the protests in that state against logging. It so happens, these people had not heard about it,” he recalled.

“So the official report was that there was ‘no objection’ against logging. But how can they say that when there were protests and even a court case against the logging?”

A key issue is indigenous ownership of land. In Sarawak, this is called “native customary rights” or NCR land, something which was recognised in colonial times by the Brooke White Rajahs. “In a MTCS meeting in KL years ago, NCR land was discussed and recognised,” Nicholas recalled. “But later, when we saw the official minutes of the meeting, all mention of NCR land was gone.”

A file photo of logging in Pahang in April 2016 is far from the eco-friendly standards of the MTCS. - GLENN GUAN/The Star

Another issue is how the system is applied. Nicholas explained that, under proper forest certification, there are many rules about replanting and selective logging that should apply to one forest reserve, say of a size of 1,000 hectares.

“But under MTCS, the problem is that the whole state is identified as one ‘Forest Management Unit’ or FMU,” he explained.

This allows cherry picking on the rules, for example if some replanting or help to orang asli is given in, say, three or four places in a big state, the claim can be made that standards have been complied within the whole state, even though logging in other parts of the state may be less than sustainable.

Nicholas recalled that indigenous people’s representatives used to be part of the MTCS meetings in its earlier days. “The officials would go on and on at the meetings, but indigenous groups were not given much time to talk and rebutt what had been said. Yet our attendance at the meetings was taken as consent and participation.”

So, that is why Nicholas and others decided to withdraw from the meetings.

In short, even though our  timber is "certified", all this may amount to a whitewash, or rather greenwash, of it being "sustainable".

MTCS is part of the global PEFC (Programme for the Endorsement of Forest Certification) system. Environmental group Greenpeace considers PEFC and MTCS to be schemes "controlled by and for the forestry industry".

Their "loose rules do not provide any assurance... to halt natural forest conversion, biodiversity loss and the violation of indigenous peoples' rights." In contrast, Greenpeace is a founding member of FSC.

Rather than MTCS, Nicholas instead advocates that Malaysia adopts the global Forest Stewardship Council (FSC) standards.

“FSC standards are better because grassroots indigenous people are much more involved in the certification,” he said. “They say that MTCS is ‘FSC compatible’, but in reality it’s lower than that. Why not just accept FSC which has the best standards?”

The best reason for the timber industry to maintain forests is for continued profits, said Anthony Sebastian of FSC. Photo: Filepic

“FSC is the highest standard of forest and timber certification recognised in the world. We have strong mechanisms for dialogue to resolve conflicts with indigenous peoples,” said Anthony Sebastian, a Malaysian who is part of FSC’s international board of directors.

Sebastian replied, “If you say that you are giving your own certificate (for logging), international buyers will say, ‘I prefer if somebody outside verifies your certificate.’ A national scheme like the MTCS has to get everyone in the world to recognise it. But the world doesn’t revolve around Malaysia and the buyers of logs are from outside the country.”

Thomas Jalong, Secretary General of the Malaysian Indigenous People’s Network (JOAS) said, “There has long been a lack of respect and participation for native peoples when it comes to logging. That’s why there have been timber blockades since the 1980s.”

“There has been minimal sharing of the benefits of logging to the native communities, we just get the crumbs. Even the logging roads which were built have become so rough, like wildlife tracks.”

As for certification, he says. “We welcome any process that respects the wishes of the affected communities.”

Musa Salleh, Senior Planning Officer of the Sabah Forestry Department, noted that 650,000 hectares of forests in the state are certified under FSC. “This was possible because there was strong political will to have sustainably managed state forests (but not including private logging concessions),” he explained. “The reason for doing this was to get better market access and prices for Sabah’s timber.”

This 'pokok ibu' tag under the MTCS lets loggers know that this is a 'mother tree' that should not be chopped down as it will provide seeds.

FSC itself is not perfect and there are some worrying questions (https://tinyurl.com/star2fsc). Greenpeace also notes that there have been "gaps in the system" for FSC which need to be fixed.

Nevertheless, for Choo, he noted that WWF-Malaysia recognises FSC as the “gold standard” for forest certification. What about MTCS?

"Having country-specific certifications like the MTCS are far better than having no certification at all," he said. “WWF-Malaysia maintains that it is crucial to engage actively with the MTCC to continuously improve the MTCS to be at par with FSC standards. As such, we are a member of the MTCS Standards Review Committee.”

Despite being a voluntary process, Choo underlined that the timber industry should go for forest certification to ensure that it is sustainable.

Sebastian said, “As a timber company, the last thing you want (for the long term) is not to have forests to log any more. The best reason for keeping your forests is for continued profits. Certification means that you will always have forests.”

True or not: Timber certification claims to make logging eco-friendly 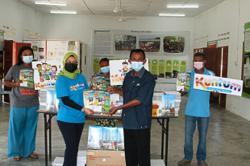