Environmentalist Yasmin Rasyid, the fixer who gets things moving 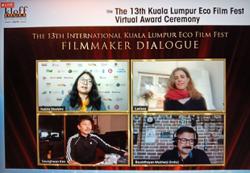 There is no stopping her now as environmentalist Yasmin Rasyid intensifies her efforts to influence young minds so that they become more environmentally conscious.

Despite managing two non-profit organisations and being a partner in a start-up social enterprise, Yasmin somehow still manages to find time for her family, work and the community.

“What drives me is the challenge, I love it and I always feel like I’m the fixer who mobilises things,” said the president and founder of EcoKnights.

The mother of two girls adds that she loves educating the community about sustainable living and equipping them with the knowledge to walk the talk.

Most people may be aware about environmental issues such as climate change, but only a handful actually do their part in trying to save the environment.

“I try empowering the community and teaching them what to do, like a catalyst planting the right ideas here and there,” she said.

Yasmin, who is also leading the Malaysian Environmental NGO (MENGO) which is a coalition of environmental NGOs, says the organisation strives to empower young minds.

These days, it runs an eco-film festival, presents awards to environmentally responsible companies, and conducts workshops and training for big groups from corporate bodies and government agencies but a decade ago, EcoKnights was formed around her dining room table in 2005 with just the idea of empowering young minds and the community in Klang Valley.

“Before EcoKnights, I did many workshops and trained residents associations and schoolchildren.

“My mother and husband gave their full support when I decided to start something on my own and made what I’m doing more real and structured,” she said.

Ecoknights founder Yasmin Rasyid and her aquaponics project. On top is Japanese cucumber, and fish live in the area below.

With nine other friends and acquaintances, they registered EcoKnights and it grew from there.

Now, she has four full-time staff, six interns and hundreds of volunteers registered in its system to help in projects.

Her volunteers range in age from as young as 15 to 60.

Yasmin hopes that more young children will be exposed to environmental issues and be empowered to take action and make a change.

“I didn’t get much exposure to these issues while growing up, until I was in my late teens when I spent a summer in the United States at my university’s marine lab.

“From there I started gaining interest in environmental issues such as global warming. That was around 1995.

“It ignited the passion in me to want to do something when I returned to Malaysia,” she said.

Having graduated with a degree in Marine Biology, she then pursued a Masters’ degree in biotech while working in World Wildlife Fund (WWF) for Nature as a scientific officer in managing river basins.

“I focused more on research and policies for the Integrated River Basin Management (IRBM), which was a good experience, but still it wasn’t fulfilling.

“The tipping point came when I got the opportunity to conduct talks and workshops under WWF for schoolchildren and it was then I started to think about how the rest of the public were still unaware,” she said.

With the unwavering hard work put in by her and her team, Yasmin notices there is definitely a perception change in society now in how people view environmental issues.

Compared to when she first started, she realises that more schools are now incorporating social science-based activities and the local authorities are also engaging the community in more green and sustainable projects.

“People are more aware now but getting to this point wasn’t an easy journey, and we still have a long way to go,” she admitted.

One of the challenges she faced with empowering the community is changing the mindset.

It isn’t easy to change the habits or lifestyle of someone older, especially those who have been doing the same thing for over 50 or 60 years.

An obvious example is waste separation, she points out, where the older generation are more likely to dismiss the idea altogether and do it their own way.

“When they see others not doing it, they will not want to do it either, so it is really difficult to inculcate new things in them,” she said.

She notes that most still don’t see how important environmental issues are because society cannot see the bigger picture.

“They can only see maybe 20 years down the line but not more than that.” So she is determined to educate the community on this.

When asked if the environmental issues have been the same since she started, she explained that the issues have always been there but now they have just intensified.

“People only react when something happens, like the haze, for example. If you don’t see it, then it isn’t a concern, but we can try preventing it.

“It’s just human nature to react in the wake of a crisis. I know sometimes we may sound like a broken record but education is an ongoing process and it never stops,” she said.

At the same time, EcoKnights has been supportive of all government initiatives and hopes to keep working hand-in-hand with the government.

Yasmin believes that although initiatives such as waste separation should have been implemented long ago, it is better late than never.

“I want the younger generation to rise up and take over.

“We are planning to expand EcoKnights to other states and empower the locals there to run EcoKnights in their own communities and tackle their respective local environmental issues,” she said.

One of those who have been inspired to do more for the environment after meeting Yasmin is EcoKnights programme director Fadly Bakhtiar. He started in the organisation as a part-time volunteer whose main duty was to hand out flyers on EcoKnights.

While he still works full-time in a motorsport company, Fadly has taken on more responsibilities to help the NGO achieve its aim of empowering young minds.

Environmentalist Yasmin Rasyid , the fixer who gets things moving