Trampoline workouts have arrived in Malaysia

Some of the trampoline workouts are similar to the ones in the gym.-Art Chen/The Star.

Malaysians can finally jump up high with the opening of an indoor trampoline park.

Anyone can jump. As long as you can lift two feet off the floor simultaneously, and your entire body is temporarily airborne, it’s a jump.

If you want to increase the height of the jump, use a trampoline. Once considered a kids’ apparatus, trampolines are the latest trend in fitness. Trampoline parks are popping up across many parts of the United States, offering fitness classes that incorporate aerial aerobics to tone and burn some major calories.

The novelty hit our shores in August, with the opening of Malaysia’s first indoor trampoline park – Jump Street Trampoline Park in Petaling Jaya, Selangor. The park is an urban playground for adults and children, with hundreds of interconnected trampolines on the floor to right up the walls, and a main jumping arena covering over 9,000 square feet.

The benefit of using a trampoline to burn calories and increase fitness levels has apparently been researched by the National Aeronautics and Space Administration (NASA). They found that 10 minutes of bouncing on a trampoline provides a more efficient cardiovascular workout than over 30 minutes of running.

Bouncing on a trampoline also reduces the impact on your limbs by 80%, while making them stronger.

Some scientists also conclude that jumping on a trampoline is possibly the most effective exercise yet devised by man, because of the effect rebounding has on the lymph system (a network of organs, lymph nodes, lymph ducts and lymph vessels that make and move lymph from tissues to the bloodstream). 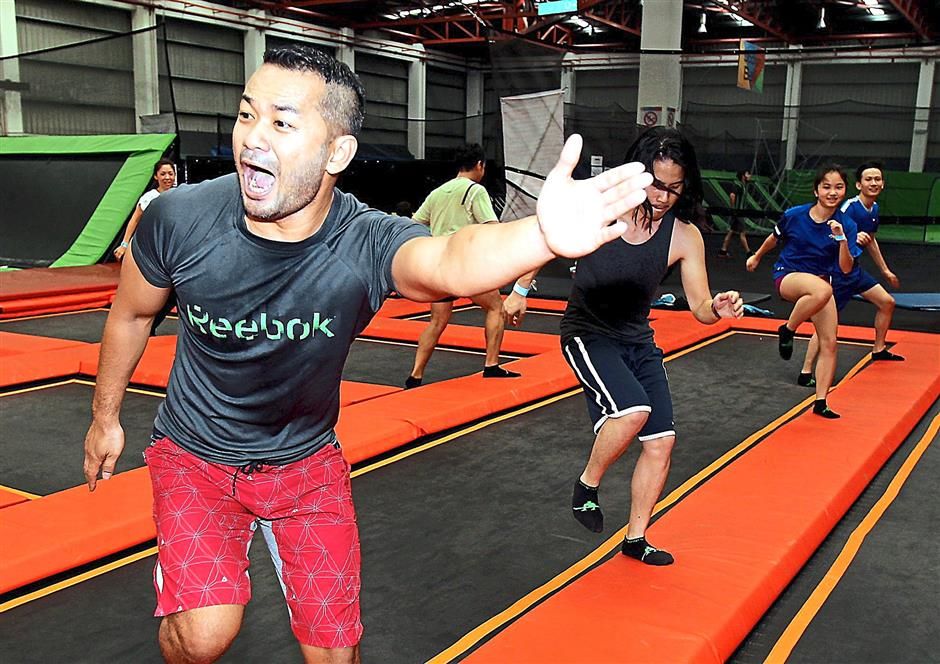 Contrary to blood, which is pumped by the heart, the lymph is totally dependent on physical exercise to move. Without adequate movement, the cells are left stewing in their own waste products and starving for nutrients.

Vigorous exercise such as rebounding is reported to increase lymph flow by 15 to 30 times.

According to exercise physiologist Dr Gay Hilton (http://acu-nu.com/gay.html), the rebound subjects the body to gravitational pulls ranging from zero at the top of each bounce to two to three times the force of gravity at the bottom, depending on how high the person is rebounding. This is the best way to build muscle, and muscle strength and density.

Jogging on hard surfaces puts extreme stress on certain joints such as the ankles and knees, oftentimes damaging them. Rebounding enhances the cells of every joint, muscle, and ligament in the body due to the increased gravitational pull, which other land exercises cannot provide.

Armed with all this information and being a sucker for new workouts, I found myself at a Jump Aerobics class at Jump Street last weekend.

I’m only used to jumping on hard surfaces and had never attempted jumps on the trampoline before, so this was a first.

On the day I visited, the class was filled with around 30 men and women, both young and old, many of whom were repeat visitors. You would imagine that a regular fitness regime would have prepared me with a reasonable amount of cardiovascular endurance for the class, but I soon found out otherwise.

We started off doing... what else, but mini jumps. Our instructor Mohd Rizal Rosli, demonstrated this progressive warm-up effortlessly, while I felt a little strange because you had to land on straight legs, as opposed to bent knees.

The fitter ones jumped higher and the newbies stuck closely to the surface of the trampoline. To stop, we had to land with knees bent. 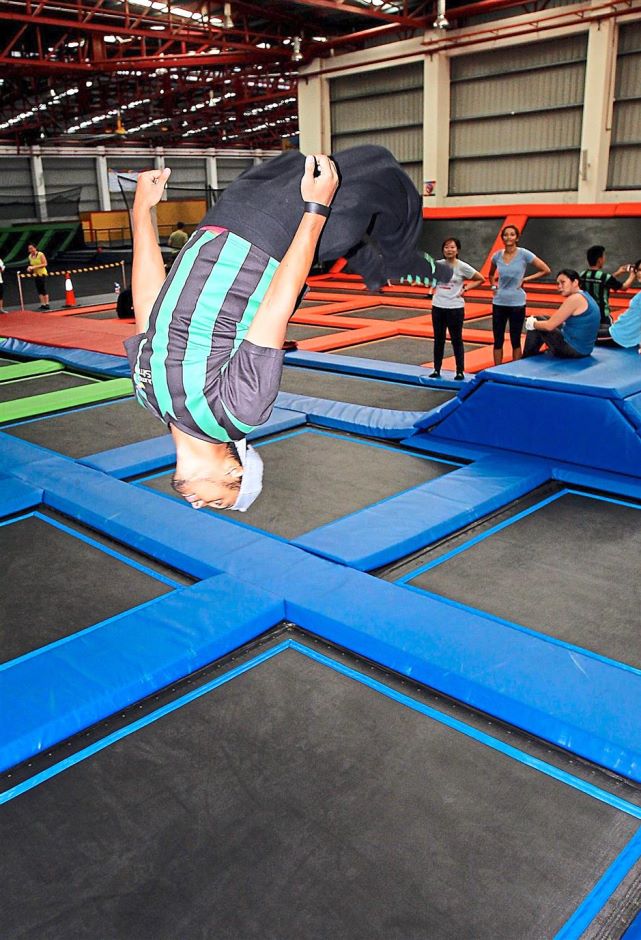 An instructor demonstrating a back flip.

These tuck jumps are a common feature in dance and since I had done hundreds of these in my youth, it was no biggie.

However, since I could elevate much higher with a trampoline, it added an element of thrill. Try a few consecutively, and feel your core tightening.

In 10 minutes, some participants were completely drained and left the arena, breathless. The rest continued with some dancing routines, jumping across trampolines, tumbling and somersaulting.

A lot of the moves on the trampoline are similar to that offered in a gym (e.g. jumping jacks, push-ups, lunges with leg changes, crunches, etc). The intensity of the moves can also be scaled up or down, depending on your fitness level.

It’s easy to improve your agility and coordination here. Working out on an unstable surface like a trampoline will force you to engage all the muscles in the body to stay balanced.

It doesn't matter if you've never jumped on a trampoline before – the workout is for everyone, from the professional athlete to an absolute beginner. Rizal reckoned one can burn up to 700 calories in an hour.

At the end of the one-hour workout, I was drenched with sweat, but buzzing with adrenaline. Never mind that my upper body muscles were sore the next day, and I had to resort to a massage to unwind; it was well worth it.

A word of caution, though. While it is relatively safe if you stick to the basics, there is a high element of injury risk involved if you’re trying more advanced tricks like back flips, wall-climbing and what-nots. There have been reported cases of ankle and back sprains, and ligament tears.

If you have a knee or back injury, it’s advisable to get clearance from your medical practitioner before you jump on the trampoline.

Still, it’s nice to relive your childhood memories, so even if you’re only bouncing slightly, a trampoline workout has many benefits. I can’t wait to try another session!

> The writer is a certified fitness trainer who tries to battle gravity and continues to dance, but longs for some bulk and flesh in the right places. For further information, please e-mail starhealth@thestar.com.my

Trampoline workouts have arrived in Malaysia

Can you shake it up and move all around?
Why can’t I sleep well? These could be the reasons
Positive psychology can help us live authentically happy lives
People with autism need more support at community and societal levels
Anti-smoking Bill: Where there’s smoke, there’s a whole lot of hot air
Natural ways to defend your body against respiratory diseases
Tips on how to parent the smart way
Is Malaysia on track to achieving the third Sustainable Development Goal?
MPs, support the tobacco control bill!
Gaze on this dot to increase your concentration power