Should spreading vaccine misinformation be a crime? Should spreading false information about vaccines like this advertisement in London be made into a crime? — Bloomberg

Concern is growing about the spread of false information about vaccines.

But should we consider criminalising people who deliberately spread false information, or could this do more harm than good?

On ethical grounds, deliberate intent to spread malicious vaccine disinformation that could result in preventable deaths should be considered criminal, argues Professor Melinda Mills from the University of Oxford in the United Kingdom.

She points out that a majority (70-83%) of Americans and Europeans use the Internet to find health information – often on social media – and that over 65% of YouTube’s content about vaccines seems to be about discouraging their use, focusing on autism, adverse reactions or false ingredients.

And a recent British study found that users who relied on social media for their information, particularly YouTube, were significantly less willing to be vaccinated.

However, she acknowledges that criminalisation is not straightforward.

For example, laws against spreading fake news and health disinformation have been passed in France, Germany, Malaysia, Russia and Singapore, but social media companies have argued that they are not publishers and have minimal responsibility to vet posts, although they have agreed to conduct some editorial decisions and fact-checking.

And early evaluation of the German law showed that social media companies were risk-averse, curtailing freedom of expression and censoring legitimate material.

“We need to decide whether social media companies are publishers, and we need legislation to guide them to adjust algorithms and determine to what extent information should be balanced and fact-checked, with users directed to accurate sources,” she writes.

“The government, scientists, and health authorities also need to take responsibility ... offering content as engaging as their misinformation counterparts and allowing dialogue,” she adds.

But Prof Mills believes that criminalising people who intentionally hurt others through false information should also be considered.

“The freedom to debate and allow the public to raise legitimate vaccine concerns to fill the knowledge void, should not extend to causing malicious harm,” she concludes.

There is no denying that the world would be a better place without misinformation, or that it would be in the public interest for anti-vaccination misinformation not to exist.

But criminalising it could make it grow even stronger, argues Jonas Sivelä from the Finnish Institute for Health and Welfare.

He acknowledges that civil liberties, including freedom of speech, can and should be restricted in certain cases, e.g. when it comes to inciting lawless activities and violence.

But he believes that anti-vaccination misinformation is not such a case.

Vaccine hesitancy is affected not only by anti-vaccination lobbying or misinformation, but also by the convenience of vaccination services and public complacency, he explains.

Criminalising anti-vaccine misinformation seems a strong response, but does not deal with these issues.

We must also acknowledge that there are legitimate concerns about vaccines that should be allowed to be voiced, he argues.

“Failing to consider or answer people’s worries, and instead suffocating relevant discussion, would only result in an increased lack of confidence in the long run – and an increase in misinformation.”

Instead of criminalising communication, other technical solutions for tackling misinformation have proved successful, such as efforts by Facebook and Twitter to deal with false claims through fact-checking and labelling misinformation, he adds.

What’s more, trust in authorities, governments and the healthcare system is key when it comes to ensuring high vaccine acceptance, he says.

“The only way to sustainably reduce misinformation about vaccination – and to strengthen vaccine confidence and acceptance in the long run – is to increase trust in these institutions and authorities in different countries,” he concludes.

Should I worry about the side effects of the Covid-19 vaccine?

Got vaccinated against Covid-19? Keep that mask on! 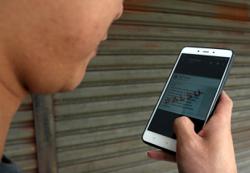 Working out at home? Follow these tips for a safe workout
About the Sinovac, Sputnik V and Johnson & Johnson Covid-19 vaccines
More young children seeking help for eye problems Premium
How doctors can market themselves without running afoul of non-advertising laws
Healthy snacking and going meatless: top food trends of Gen Z
Dead Butt Syndrome: A dangerous medical condition you shouldn't sit on
Elderly receive good protection with these two Covid-19 vaccines
How to care for your arthritic joints
It's more comfortable, but what is the cost of going braless?
Lace 'em up! For a mental health boost, take a hike