Tan posing for a wefie with her husband, Sam Ho, who is continually amazed and inspired by her attitude towards life. — KAMARUL ARIFFIN/The Star

We all suffer from fatigue once in a while; so did Tan Shu Hua.

Back in 2014, the interior designer was juggling work and raising two young children, then aged two and four.

Her legs were always tired and she’d experience the occasional cramps.

“I didn’t think too much of it because I assumed my body just needed rest from looking after the kids.

“We had a wedding to attend one night, and I decided to wear my high heels, which I hadn’t used since my children were born.

“All was okay at the beginning, but as the night wore on, the cramps became so bad that I had to remove my shoes and walk barefoot, ” recalls the 38-year-old.

When she casually mentioned her tiredness to her parents, they advised her to look after herself, especially as she was now a mother.

In typical Asian style, her mother told her she was drinking too many cold drinks and chided her for wearing shorts instead of trousers to keep her legs warm.

When the problem persisted, Tan quit her job to become a full-time homemaker. 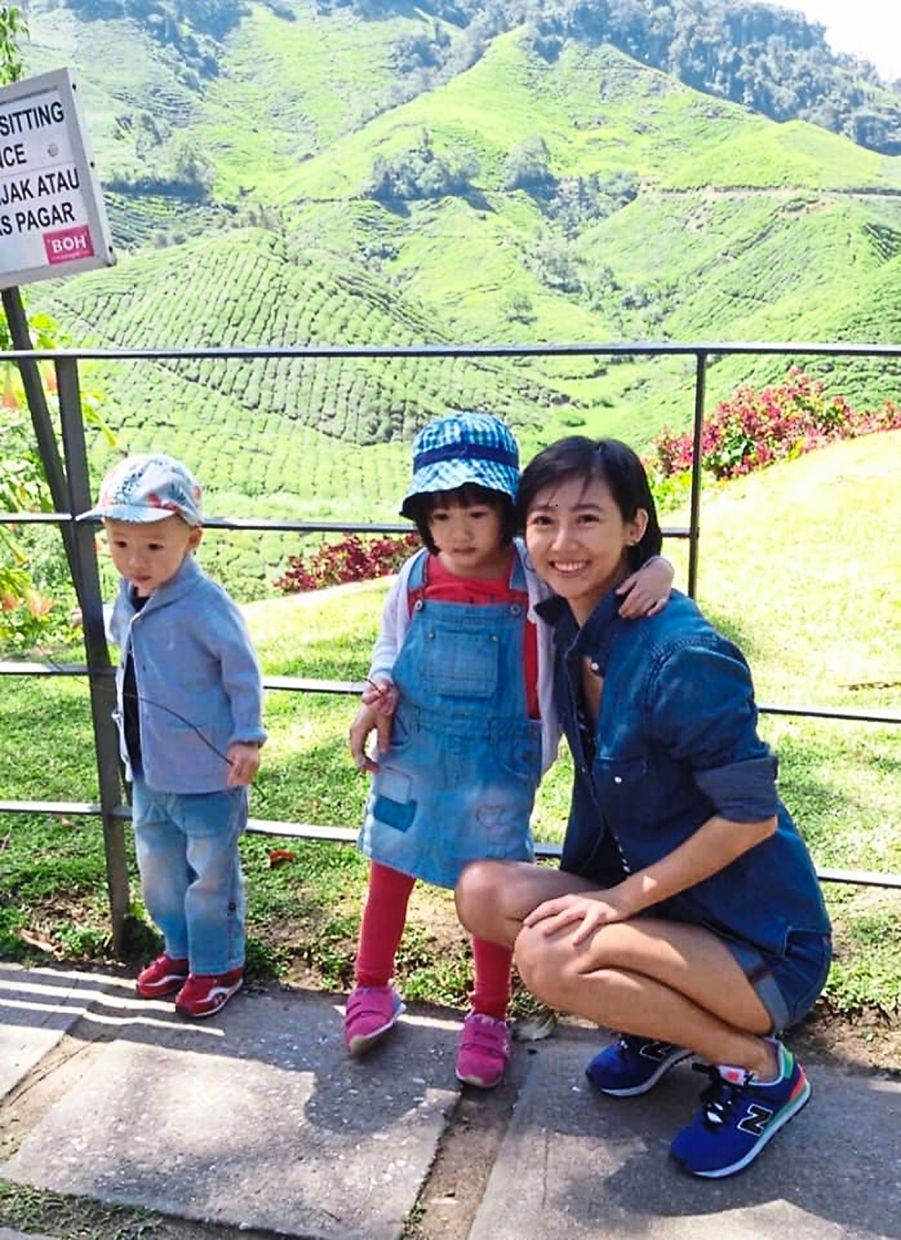 Before her diagnosis, Tan loved running and spending time outdoors with her family, especially her two children. — Photos: TAN SHU HUABut the cramps still bothered her, so she consulted a tit tar (traditional Chinese bonesetter) practitioner who said her leg weakness was due to an imbalanced pelvic structure.

She then decided to resume going to the gym to strengthen her leg muscles, but noticed that she couldn’t keep up her usual pace on the treadmill.

Prior to childbirth, Tan was fit, sporty and loved the outdoors.

She says, “I thought I’d eventually get stronger because I hadn’t been exercising for a while.

“I continued, but my legs kept lagging on the treadmill. A few weeks later, they just gave way after dinner and I fell.

“That’s when my hubby said I should get checked by our family doctor.

“When I entered the clinic and saw the doctor’s expression, I knew something was not right.

“She said my right leg was obviously smaller than the left – I never realised this.”

Tan was then referred to a neurologist, who asked her to walk on both heels. She couldn’t, and that perplexed her.

After a series of tests and scans, the electromyography (EMG) results showed abnormal readings.

An EMG involves inserting a needle electrode through your skin into various muscles.

It evaluates the electrical activity of your muscles when they contract and when they’re at rest.

“I had heard the name from the Ice Bucket Challenge (an annual event aimed at raising awareness and research funds for ALS), but I knew nothing about the disease.

“The specialist told me there was no cure for ALS, but there was a drug that could slow down the progression.

“He said, ‘Sometimes it might work, sometimes it won’t – it depends on the patient. You want to try the drug?’” she recalls.

With news delivered to her in that manner, she refused to accept the diagnosis and fled the room in shock.

She sought a second opinion at a private hospital, retook all the tests and was given the same diagnosis.

“This doctor told me I had five years to live and I broke down crying.

“He asked if I wanted to see a patient who was admitted in his last stage of ALS. I didn’t want to because I was not ready to face this.

“I went home, feeling it was the end of the world, wondering how come there is no chance for me to fight this disease?” shares Tan, tearing up. 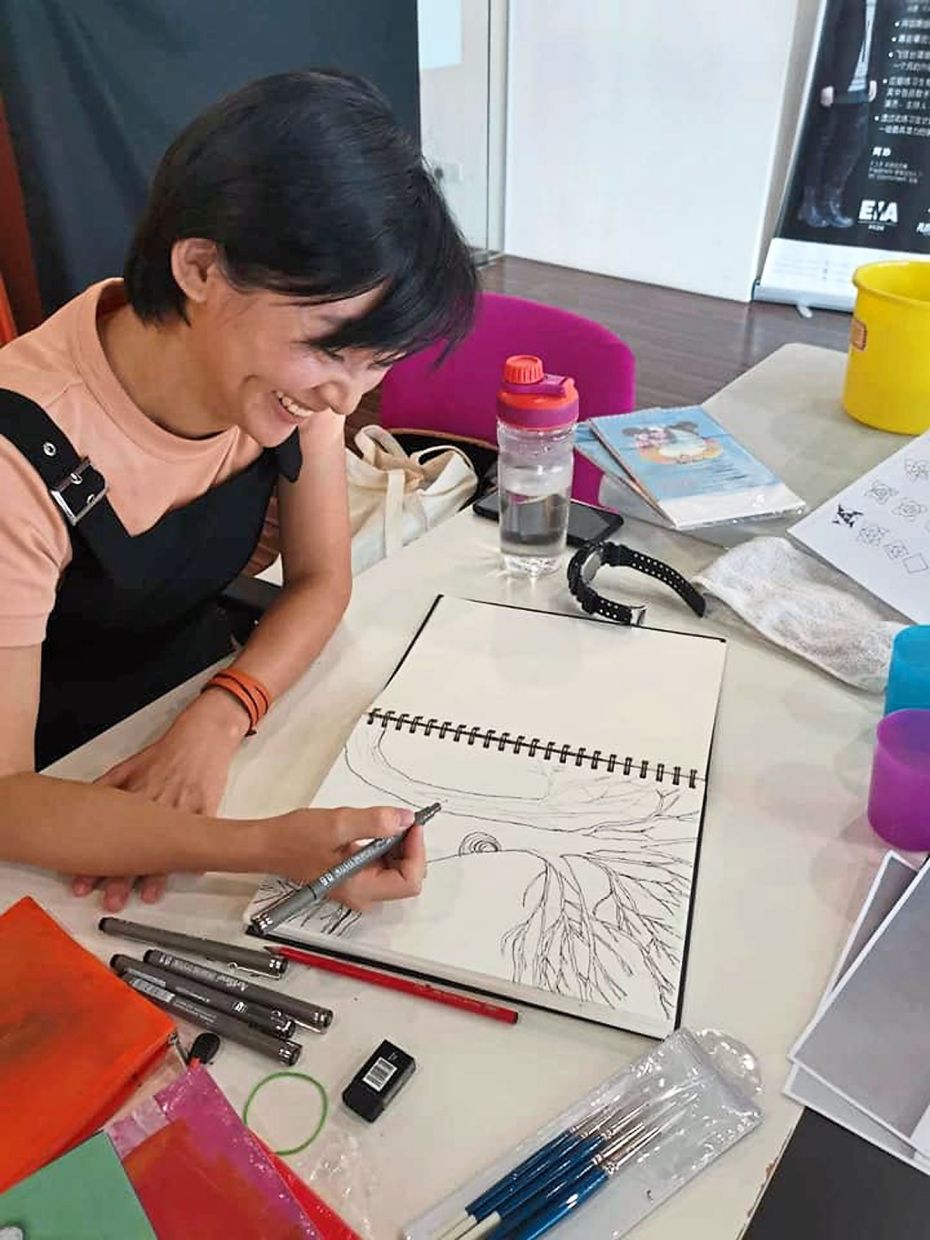 Drawing is one of the ways Tan occupies her time enjoyably when her children are at school.Hard to accept

ALS is often called Lou Gehrig’s disease, after the American baseball player who was diagnosed with it.

No one knows how ALS comes about, but there is a genetic link.

It often begins with muscle twitching and weakness in a limb, or slurred speech.

Eventually, it affects control of the muscles needed to move, speak, eat and breathe.

There is no cure for this fatal disease.

The signs and symptoms of ALS vary greatly from person to person, depending on which neurons are affected.

According to Mayo Clinic, over time, ALS paralyses the muscles used to breathe, leading to respiratory failure, and eventually, death.

On average, death occurs within three to five years after the symptoms begin.

However, renowned British physicist and author of A Brief History of Time, Stephen Hawking, was one of the longest surviving patients with ALS.

He was diagnosed when he was 21 years old and lived for 55 years with the incurable condition, dying in 2018.

She says, “I tried the drugs for two months, then opted not to continue.

“For one, it was expensive and I had to check my kidneys every three months, and as the first doctor said, there is no guarantee it will work.”

The whole family has had to adjust to Tan’s disease. Husband, Sam Ho, is at her beck and call at all times.

Tan also has a helper at home and an extremely supportive family to lend a helping hand.

“When I go to the hospital to check on my lungs, I look at the patients and see the sadness in their eyes – I wonder if I look equally depressed.

“I don’t want my family to be influenced by my mood, so I pretend I’m okay, but when I’m alone, I will cry.

“I try to comfort myself by saying I need time to accept my disability.

“My family tells me not to give up, but it’s hard to be positive all the time, ” shares Tan, the eldest among five girls and a boy.

She adds, “My kids know something is wrong, but my son will still ask, ‘Mummy, when are you going outdoors to play with us?’

“I long to run and climb, but I’m no longer able to do all that.

“I go for weekly acupuncture sessions and swim when I can.

“I also do my own version of yoga to stretch my back and legs because I’m sitting in the wheelchair for long hours.”

But she’s still a tiger mother, she confesses, laughing.

She says, “I will scold and yell at them to do their homework and discipline them when they misbehave.

“We live in a condominium, and sometimes, I feel like being in the garden so I’ll ask my son to wheel me downstairs.

“He’ll be grumbling because he doesn’t want to do it, but I make him do it anyway!”

Tan loves shopping, but heading to malls and retail outlets is a nightmare for persons with disabilities (OKU) – something she took for granted when her legs were functional. 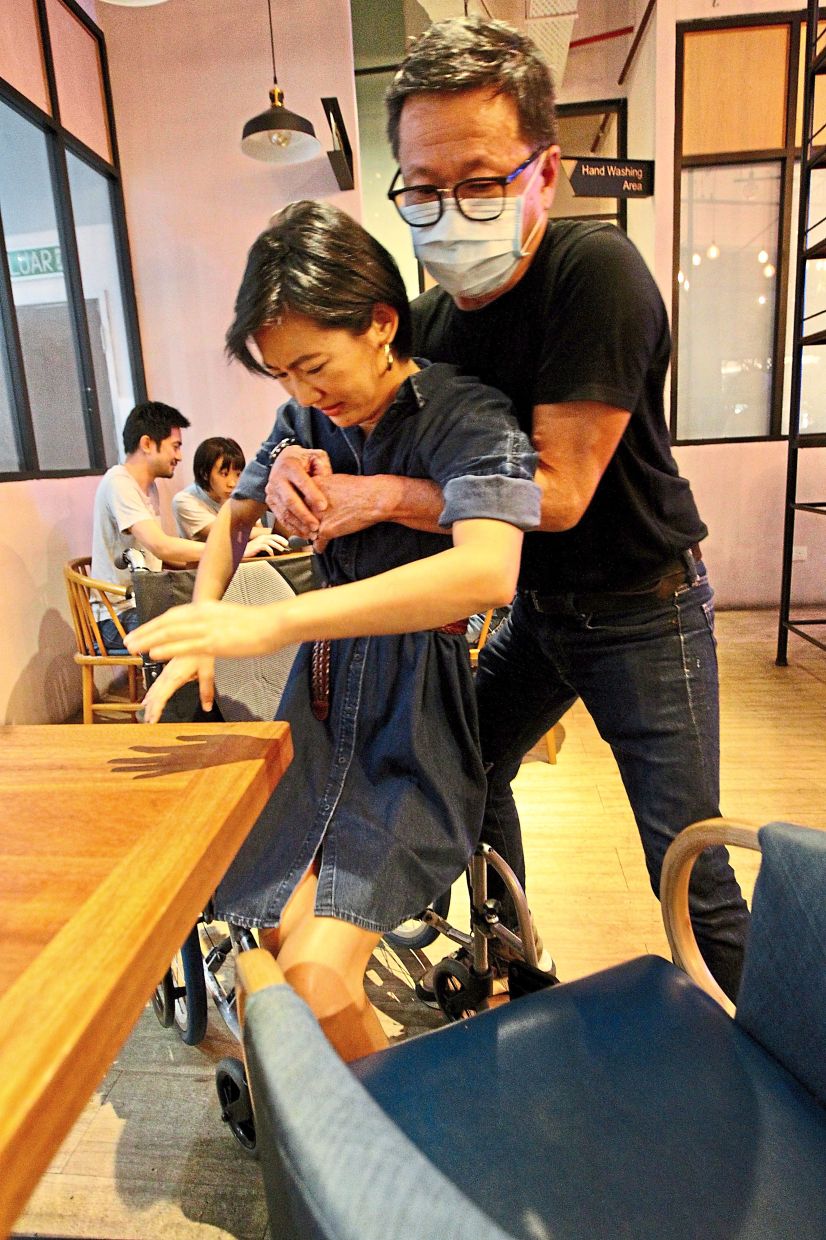 Tan needs to be accompanied every time she goes out as she needs help getting in and out of her wheelchair. Here she is assisted by her husband. — KAMARUL ARIFFIN/The Star

Among her complaints are: difficulty accessing shops, lack of OKU parking bays, people smoking in OKU toilets, OKU toilets being used as storerooms and the absence of OKU toilets in restaurants (outside malls).

“The worst case is when the OKU toilets are locked.

“One time, I held my urine for two hours because we couldn’t find a supervisor to open the OKU toilet.

“We were going up and down the mall, and every OKU toilet was locked!

“When we finally located the supervisor, he didn’t seem too bothered.

“I’m lucky I’m still young and can control my bladder. If it were an older person, he would have wet his pants.

“It seems as if OKUs are not important enough to society.

“We’re not looking for sympathy, but empathy, ” laments Tan, who is unable to go anywhere unaccompanied as she needs help with her wheelchair.

Going to restaurants is another challenge as very few of them have facilities for the disabled.

When she longs for some alone time, her husband will drop her off at a café and pick her up once she’s ready.

She says, “Usually, I try not to drink too much. When I need to go to the toilet, it’s time to leave!”

These days, she has come to a sort of acceptance of her disease after crossing the five-year mark last year.

“I don’t worry about my timeline anymore.

“My children are so well-loved and I know they’ll be taken care of when I’m not around.

“They are young and will be able to accept things better than older people.

“My worry is that I’ll get so weak that no part of me can move except my two eyes.

“I don’t want my parents to see me in that state and blame themselves for my disability, ” says Tan, revealing that lately, her fingers have also started to cramp. 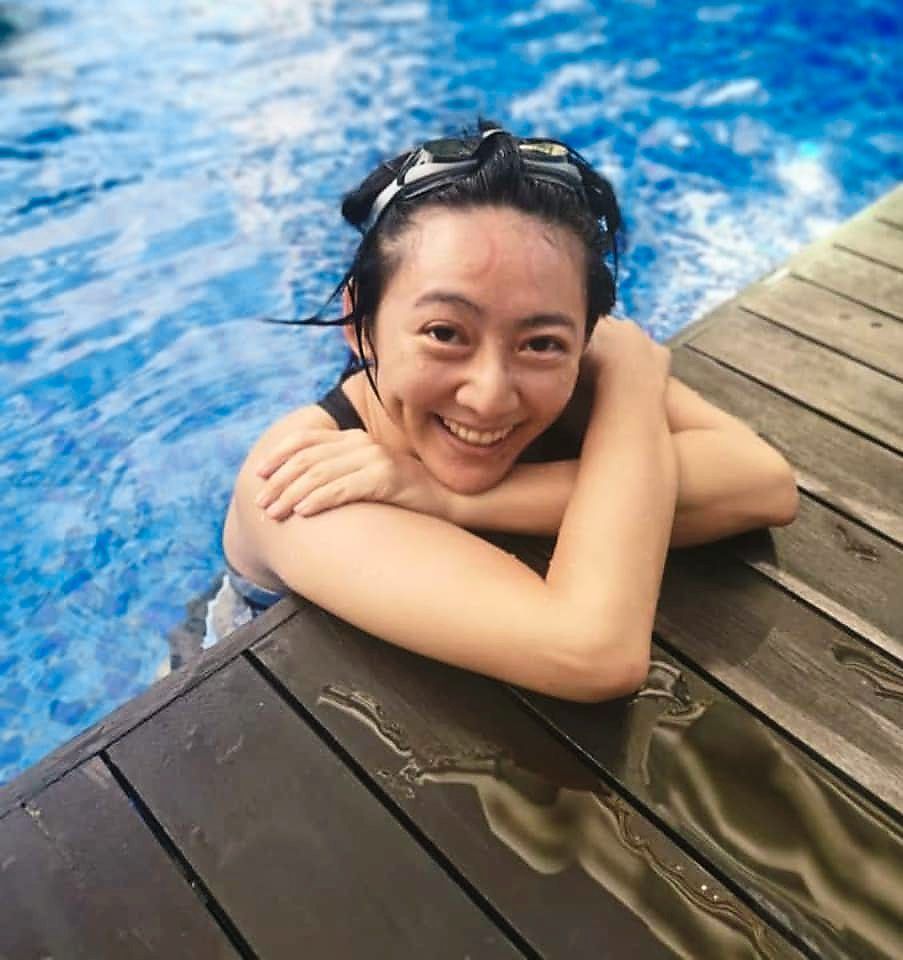 Tan swims whenever she can to keep herself fit and agile.No regrets

To “celebrate” being alive after five years, she has started the OK i love U page on various social media platforms to share inspirational videos and snippets of her daily life as an ALS patient, and to “encourage and change some people’s mindset about OKUs”.

When she speaks of her project, her face lights up and there is a twinkle in her eyes – the optimism returns.

She says, “The word OKU always gives people the impression that we are weak and an inconvenience.

“I want to change this perception and hope others in my situation will live happily by living life to the fullest.

“I try to have a positive attitude towards life. I don’t think that your life has to be ruined even if you are an OKU.

“Our willpower and attitude to live are important.”

In one video, she says, “My husband and I have a big age gap, and when I got married, I thought we’ll both be growing old and he would be the one sitting in a wheelchair.

“I never thought that he would be the one pushing me around.

“The world is so unpredictable and life is full of uncertainties, so cherish every moment and live every day without regret.

“I may have lost my health, but in return, I have received so much love.”

As Ho sums up, “It’s fate that brought us together as a couple and I have learnt so much from her. I could never do what she is doing.

“She’s the angel that brings joy to the world – an angel with broken wings.

“We might be counting the days, and everyone dies eventually, but I know that she is living her life to the fullest – that brings me peace.”