Surround your children with greenery to boost their IQ Expose your children to greenery in their daily lives to give their intelligence a boost. Photo: AFP

A study conducted on 600 children aged from 10 to 15 by Hasselt University researchers in Belgium suggests that growing up in a “greener” environment is associated with greater intelligence and fewer behavioural problems.

These conclusions should encourage us to change the way children interact with nature, especially in schools at a time when there is increasing support for outdoor learning.

The analysis published in the journal Plos Medicine, demonstrated that a 3% increase in green space in children’s neighbourhoods raised their IQ score by 2.6 points on average.

In measuring green space, the researchers took into account parks, gardens, trees in the streets and all other vegetation visible on geo-localised satellite photographs.

Along with intelligence, and in line with previous studies, the researchers also showed that a 3% increase in green space was also associated with fewer behavioural difficulties like low attention span and aggressiveness.

The reasons for the correlation are still uncertain, but the researchers suggest that calm, opportunities for social play and a low level of stress, may all contribute to boosting cognitive abilities.

Even though the term “intelligence” is overused and methods of calculation to evaluate it are still the subject of dispute within the scientific community, this research has once again demonstrated that nature is good for the brain.

The finding is also in line with the conclusions of a previous 2015 study carried out on children in Barcelona, Spain, which showed that more green spaces were associated with improved working memories and attention spans.

Both of these studies should encourage us to think about new ways to integrate nature into our lifestyles, not only for the benefit of children, but also for adults.

Maintaining a connection with nature is important for people of all ages. – AFP Relaxnews

What to do when your child cannot stop scratching himself 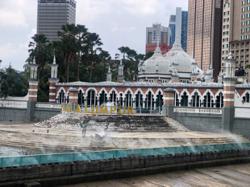