The public paying their condolences in the form of flowers placed near a photo of the late Dr Li at a hospital in Wuhan. His death from the coronavirus infection triggered public anger and grief in China. — Chinatopix via AP

Patients all over the world, including in Malaysia, are treated and cared for daily, even on weekends and public holidays, by dedicated doctors and nurses whose frontline jobs entail lots of sacrifices, e.g. sleep and family time, as well as daily obstacles to the provision of safe and quality care.

There is rarely any acknowledgement and recognition, let alone accolades, of their dedication and hard work.

However, there has been no lack of complaints about the services provided by public and private doctors and nurses.

While some of these complaints are justifiable, the majority are not.

The current novel coronavirus (Covid-19) outbreak is a reminder of the dedication of the medical and nursing professions, to whom this tribute is written by one who has both benefited from their care and witnessed it on a daily basis for decades.

Dr Li Wenliang, an ophthalmologist at a hospital in Wuhan, China, warned his former medical school classmates in a chat group on Dec 30,2019, of his suspicion that seven patients associated with a live-animal market, had been admitted to his hospital with a SARS-like infection.

The warning was based on the fact that the patients were being treated under quarantine conditions.

Discussion in the chat group was centred on the recurrence of SARS (severe acute respiratory syndrome), which killed hundreds in 2002-2003, and the need to be cautious and take protective measures.

The discussion gained a wider audience after a screenshot of the chat was leaked.

The Chinese health authorities reported to the World Health Organization (WHO) on Dec 31,2019, a cluster of pneumonia cases of unknown cause in Wuhan.

Dr Li was accused by Wuhan’s Public Security Bureau on Jan 3 of “making false comments” that had “severely disturbed the social order”.

He was one of eight people investigated for “spreading rumours”.

The warning issued to Dr Li stated: “If you keep being stubborn, fail to repent and continue illegal activities, you will be brought to justice.”

He was forced to sign an admonition order promising not to do it again, then returned to work.

China’s Supreme Court ruled that in retrospect, the eight should not have been punished as what they said is not entirely false.

“It might have been a fortunate thing if the public had believed the ‘rumours’ then and started to wear masks and carry out sanitisation measures, and avoid the wild animal market, ” the top court’s social media account said on Feb 4.

A few days after the Public Security Bureau’s summons, Dr Li contracted the coronavirus from a female patient who had glaucoma, an eye condition due to an accumulation of fluid in the front of the eye, causing increased pressure that damages the optic nerve.

The patient had no coronavirus symptoms then.

During any examination for glaucoma, the doctor is in close proximity to the patient.

Dr Li developed a fever and cough on Jan 10, which became severe, necessitating admission to the intensive care unit (ICU) on Jan 12.

He was treated and tested for Covid-19 several times until the infection was diagnosed on Feb 1.

Excerpts of Dr Li’s interview in the New York Times on Jan 31 and Feb 1, via WeChat, was poignant, yet instructive:

Question: Looking back at what has happened, do you think the situation would be very different now if the Wuhan government hadn’t stopped you from warning others and sharing the information?

Do you think it would have been better if the information had been more public and transparent, for the public and for doctors?

Dr Li: If the officials had disclosed information about the epidemic earlier, I think it would have been a lot better.

There should be more openness and transparency.

Q: How did you feel when the police accused you of spreading rumours?

Dr Li: The police believed this virus was not confirmed to be SARS. They believed I was spreading rumours.

They asked me to acknowledge that I was at fault. I felt I was being wronged, but I had to accept it.

Obviously, I had been acting out of goodwill. I felt very sad seeing so many people losing their loved ones.

Q: Why did you decide to become a doctor? What made you proud to be one?

Can you say anything about your family?

Dr Li: I thought it was a very stable job.

Lately, patient-doctor relationships have soured. I am happy as long as my patients are satisfied with their treatment.

My older child is four years and 10 months old. The younger one is still unborn, due in June.

I miss my family. I talk to them by video.

Q: How long will it take you to recover? What do you plan to do afterward?

Dr Li: I started coughing on Jan 10. It will take me another 15 days or so to recover.

I will join medical workers in fighting the epidemic. That’s where my responsibilities lie.

Dr Li succumbed to the infection on Feb 6.

Had his superiors listened and acted earlier, the narrative of the Covid-19 outbreak could have been very different. 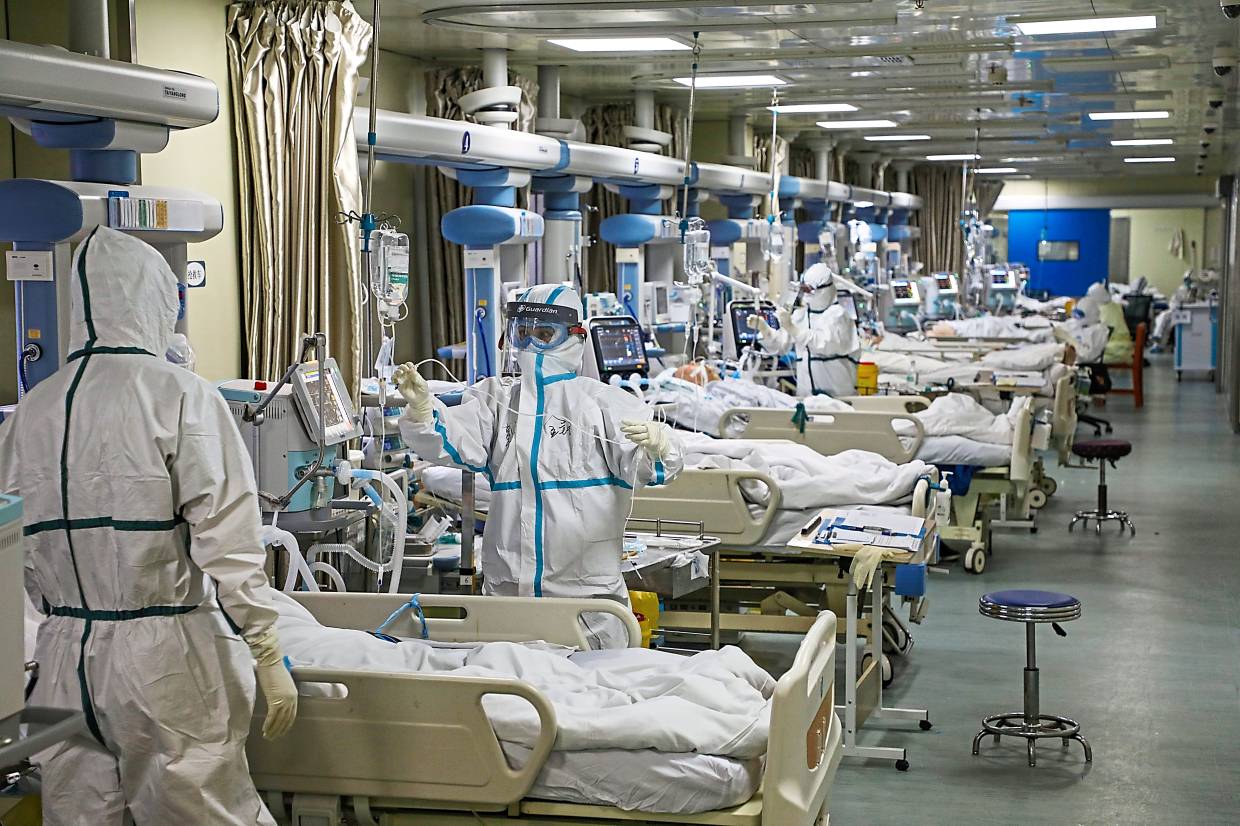 Medical workers in protective suits attend to novel coronavirus patients at the ICU of a Wuhan hospital. An undisclosed number of doctors and nurses have succumbed to the infection in the line of duty. — China Daily via Reuters

Dr Li’s saga raised the critical issue of transparency in healthcare, among others.

This matter was examined in depth by the US National Patient Safety Foundation Lucian Leape Institute roundtable in 2015.

It made the case that genuine transparency will result in improved outcomes, fewer medical errors, more satisfied patients and lowered costs of care.

The need for transparency in Malaysian healthcare was discussed in The Star Online’s Vital Signs column on Jan 15.

Like other healthcare systems, Malaysia would benefit if policymakers, administrators and managers, reflect and act on the need for greater transparency in healthcare.

China’s anti-corruption body, the National Supervisory Commission, has initiated an investigation into the issues related to Dr Li.

WHO posted on Twitter that: “We are deeply saddened by the passing of Dr Li Wenliang. We all need to celebrate work that he did on #2019nCoV.”

Dr Li was not the only one to raise concerns about the Covid-19 outbreak. There were others, some nameless.

An undisclosed number of doctors and nurses have succumbed to the infection.

All doctors and nurses in the frontline of healthcare provision, particularly in the Covid-19 outbreak, deserve everyone’s gratitude and admiration.

Theirs was, and is, an example of the core values of the medical and nursing professions, i.e. “to cure sometimes, to relieve often and to comfort always”.

The medical and nursing professions worldwide would surely salute the professionalism and sacrifices of their colleagues in China and other countries, managing the Covid-19 outbreak.

*A filepic of a Malaysian doctor doing an eye examination was used to illustrate this article (Saluting Medical Staff, StarHealth, Feb 16). The filepic was used for illustration purposes only and the doctor in the picture is not Dr Li Wenliang from China who contracted Covid-19. Any inconvenience caused by this illustration is regretted.

Covid-19 statistics: What medical resources are needed to treat the coronavirus?

Is Covid-19 an outbreak, an epidemic or a pandemic?