While previously, scientists had to insert a whole new gene into the genome to get the results they want, they can now directly manipulate the genome itself. — AFP

IN the summer of 2019, a mother in Nashville, Tennessee in the United States, with a seemingly incurable genetic disorder finally found an end to her suffering – by editing her genome.

Victoria Gray’s recovery from sickle cell disease, which had caused her painful seizures, came in a year of breakthroughs in one of the hottest areas of medical research – gene therapy.

“Since I received the new cells, I have been able to enjoy more time with my family without worrying about pain or an out-of-the-blue emergency.”

Over several weeks, Gray’s blood was drawn so that doctors could get to the cause of her illness – stem cells from her bone marrow that were making deformed red blood cells.

The stem cells were sent to a Scottish laboratory, where their DNA was modified using Crispr/Cas9 – pronounced “Crisper” – a new tool informally known as a molecular “scissors”.

The genetically-edited cells were transfused back into Gray’s veins and bone marrow. A month later, she was producing normal blood cells.

Medics warn that caution is necessary, but theoretically, she has been cured.

“This is one patient. This is early results. We need to see how it works out in other patients,” said her doctor, Haydar Frangoul, at the Sarah Cannon Research Institute in Nashville.

“But these results are really exciting.”

In Germany, a 19-year-old woman was treated with a similar method for a different blood disease – beta thalassemia.

She had previously needed 16 blood transfusions per year. Nine months later, she is completely free of that burden.

For decades, the DNA of living organisms such as corn and salmon has been modified. But Crispr, invented in 2012, made gene editing more widely accessible.

It is much simpler than preceding technology, cheaper and easy to use in small labs.

The technique has given new impetus to the perennial debate over the wisdom of humanity manipulating life itself.

“It’s all developing very quickly,” said French geneticist Emmanuelle Charpentier, one of Crispr’s inventors and the co-founder of Crispr Therapeutics, the biotech company conducting the clinical trials involving Gray and the German patient.

Crispr was the latest breakthrough in a year of great strides in gene therapy, a medical adventure that started three decades ago, when the first TV telethons were raising money for children with muscular dystrophy.

It does the work the original could not, such as making normal red blood cells in Gray’s case or making tumour-killing super white blood cells for a cancer patient.

Crispr goes even further: instead of adding a gene, the tool edits the genome itself.

After decades of research and clinical trials on a genetic fix to genetic disorders, 2019 saw a historic milestone: approval to bring to market the first gene therapies for a neuromuscular disease in the US and a blood disease in the European Union.

They join several other gene therapies – bringing the total to eight – approved in recent years to treat certain cancers and an inherited blindness.

Serge Braun, the scientific director of the French Muscular Dystrophy Association, sees 2019 as a turning point that will lead to a medical revolution.

“Twenty-five, 30 years, that’s the time it had to take,” he said. “It took a generation for gene therapy to become a reality. Now, it’s only going to go faster.”

Just outside Washington, at the US National Institutes of Health (NIH), researchers are also celebrating a “breakthrough period”.

“We have hit an inflection point,” said US NIH’s associate director for science policy Carrie Wolinetz.

These therapies are exorbitantly expensive, however, costing up to US$2 million (RM8.18 million) – meaning patients face grueling negotiations with their insurance companies.

They also involve a complex regimen of procedures that are only available in wealthy countries.

“You cannot do this in a community hospital close to home,” said her doctor.

However, the number of approved gene therapies will increase to about 40 by 2022, according to Massachusetts Institute of Technology (MIT) researchers.

They will mostly target cancers and diseases that affect muscles, the eyes and the nervous system. 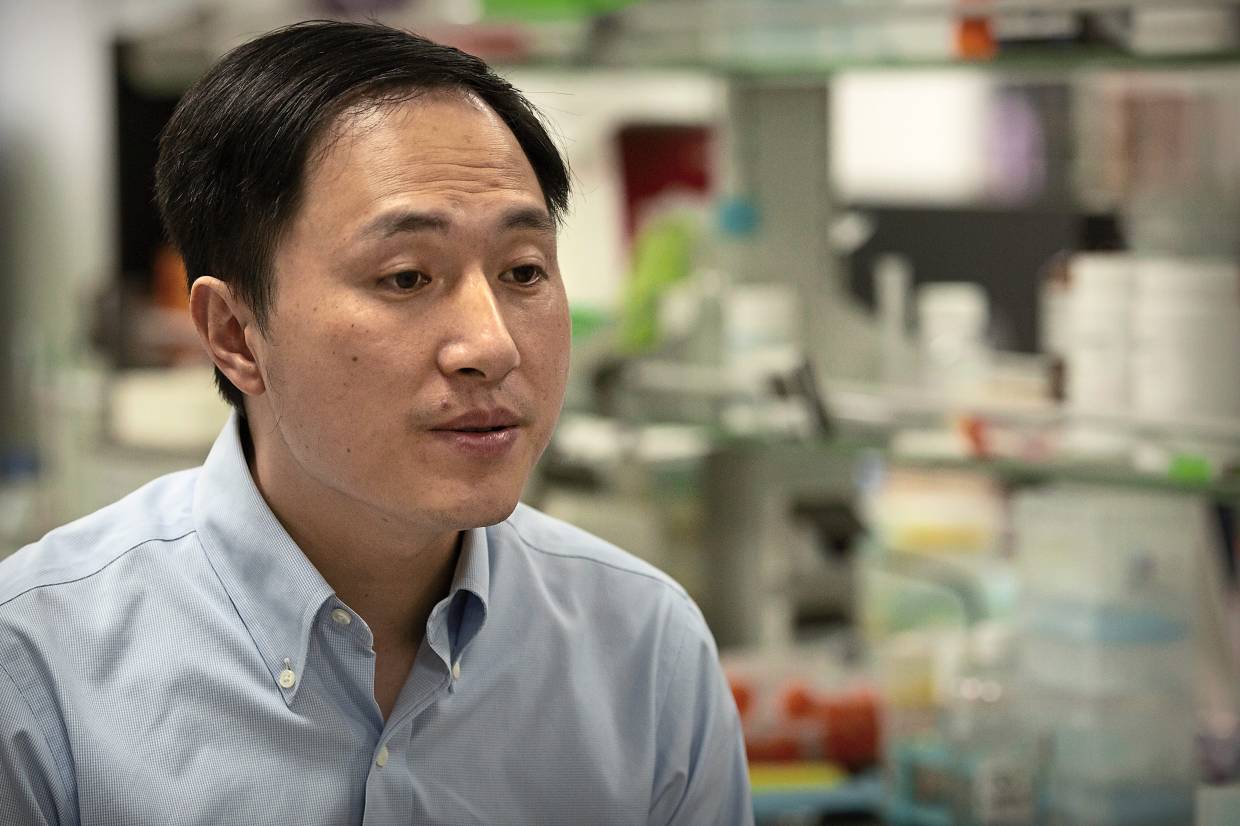 In this Oct 10, 2018, photo, He speaks during an interview at his laboratory in Shenzhen, China. The scientist was recently sentenced to three years in prison for practicing medicine illegally and fined 3 million yuan (RM1.76 million). — AP

Another problem with Crispr is that its relative simplicity has triggered the imaginations of rogue practitioners who don’t necessarily share the medical ethics of Western medicine.

In 2018 in China, scientist He Jiankui triggered an international scandal – and his excommunication from the scientific community – when he used Crispr to create what he called the first gene-edited humans.

The biophysicist said he had altered the DNA (deoxyribonucleic acid) of human embryos that became twin girls Lulu and Nana.

His goal was to create a mutation that would prevent the girls from contracting HIV (human immunodeficiency virus), even though there was no specific reason to put them through the process.

“That technology is not safe,” said Kiran Musunuru, a genetics professor at the University of Pennsylvania, explaining that the Crispr “scissors” often cut next to the targeted gene, causing unexpected mutations.

“It’s very easy to do if you don’t care about the consequences,” he added.

Despite the ethical pitfalls, restraint seems mainly to have prevailed so far.

The community is keeping a close eye on Russia, where biologist Denis Rebrikov has said he wants to use Crispr to help deaf parents have children without the disability.

There is also the temptation to genetically edit entire animal species, e.g. malaria-causing mosquitoes in Burkina Faso or mice hosting ticks that carry Lyme disease in the US.

The researchers in charge of those projects are advancing carefully however, fully aware of the unpredictability of chain reactions on the ecosystem.

“Not everyone is a biologist or scientist,” she said.

And the possibility of military hijacking to create soldier-killing viruses or bacteria that would ravage enemies’ crops?

Charpentier thinks that technology generally tends to be used for the better.

“I’m a bacteriologist -- we’ve been talking about bioterrorism for years,” she said. “Nothing has ever happened.” – AFP Relaxnews