Knowing the king of fruits

READER Effyza Diana asked: “I like durian but I noticed that whenever I eat durian, I will put on weight. Is durian a healthy food?”

Durian is a rich source of phytochemicals that are essential for optimal health. Unlike many other fruits, durian is rich in minerals and has a complete profile of amino acids. Durian is a natural food supplement. Many durian lovers have experienced its effectiveness in certain folk cures. For example, some claim that arthritic pain is reduced and energy level and alertness increase after eating durian. Some have benefited in improved bowel movement owing to the fibre content. Others claimed to have gained from its aphrodisiacal property.

Durian contains rather high levels of nitrogenous compounds derived from amino acids that are the building blocks of protein. Other fruits are low in these essential nutrients needed for good health. For example, cystine and methionine are essential amino acids required by our body for nail and hair growth, while methionine helps in promoting healthy liver and kidney functions. Durian has about three times more methionine and eight times more cystine than an orange.

Furthermore durians contain higher levels of lysine, leucine and isoleucine than oranges. These nutrients in durian promote calcium absorption, growth and repair of muscle tissue and help us to be more alert too. The amino acids valine and proline in durian are important for the proper functioning of joints and tendons and also in wound healing.

In addition to amino acids, durian is also a good source of carbohydrates, fats, vitamins and minerals, especially calcium and phosphorous. Banana is a high-calorie fruit, but a durian has higher calories. One hundred grammes of durian pulp supply about 150 calories, which is equivalent to four medium-sized pisang mas or three small apples.

Malic acid aids in digestion. Fumaric acid stabilises the pH of durian, which in turn stabilises its colour and flavour. In the food industry fumaric acid is used to improve the quality of many food and beverages. It may not be a bad idea to use durian as an ingredient for biscuit, cakes, desserts, pie fillings, drinks, ice cream or other savoury cooking to impart the unique flavour.

Due to its higher sodium and lower potassium levels compared with many other fruits, excessive consumption of durian is not recommended for people with high blood pressure.

Sodium in 100g of durian pulp is comparable to four pisang embun or eight pisang emas while potassium in durian is four to five times lower than that in banana.

Many shy away from durian because of its strong aroma. It is also commonly believed that if one eats too much durian one’s body would become “too heaty” and he/she may fall sick. The high mineral content and the easily-absorbed nutrients, especially arginine, may be of concern to some people. Arginine, a non-essential amino acid, is also produced in the body.

Consumption of excessive arginine could be the cause of weakness, diarrhoea and nausea experienced by those who ate too much durian. It may also increase the activity of certain viruses. The high minerals, especially calcium and iron, in durian could be the cause of problems in bowel movement.

Many people experience warmth after consuming durian. It is traditionally believed that durian should not be taken together with alcohol to avoid the onslaught of heart attack or stroke.

While there is no medical evidence to substantiate this claim, it is nevertheless very advisable to take lots of water before and after a durian feast to prevent dehydration and “heatyness”.

A common practice is to use the durian shell as a container to be filled with salt water and drink from it.

The alkaline shell makes an instant mouth wash capable of ridding the unique strong lingering odour remaining in the mouth and fingers.

To many first timers, its smell is most nauseous and offensive.

Taste it or let go?

Durian has hard thorny skin and yet the edible pulp is soft and creamy. The yellow or white and sometime orange creamy pulp is sweet or sometimes slightly bitter.

It is very rich in nutrients. Its unique strong aromatic flavour and creamy taste make the durian a highly valued fruit in South-East Asia. It has earned a reputation as the unmatchable king of all fruits.

The liking for its unusual taste and flavour can be slowly acquired and eventually you can be “addicted” to it.

There are some people who are against eating durian while others will skip their main meals and opt for durian. 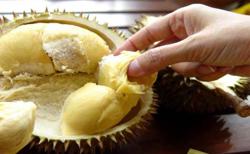 Helping your child maintain a healthy weight
Milk: Contains almost all the essential nutrients needed for children
Viruses can't find a new host species that easily
Vitamin B2 powers many antioxidant processes in the body
Will undergoing anaesthesia affect my child's brain?
Parenting Tips For Newborns
Children, including babies, can also get arthritis Premium
The need to properly share Covid-19 data
Prioritising and improving safety for the elderly at home
Yes, it's possible to reuse our face masks