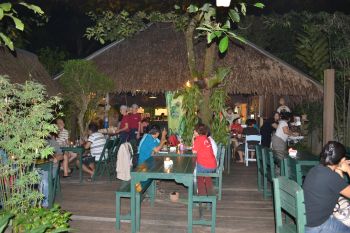 The dining area at Aunty Aini's is fairly spread out and can hold about 80 people comfortably.

YOU know that saying you'll find a pot of gold at the end of a rainbow? I think I just found my pot of gold. Off the beaten track somewhere in Kampung Chelet, Nilai, Negri Sembilan, stands this kampung-style restaurant that has played host to celebrity chefs like Anthony Bourdain and Gordon Ramsay.

Ever since watching Gordon Ramsay's Great Escape series on Malaysia I've waited for the opportunity to try the food in this restaurant simply called Aunty Aini's Garden Cafe. The opportunity came recently when a friend said she wanted a birthday dinner at Aunty Aini's.

So on a Saturday evening, eleven of us foodies in three cars decided to go on a little adventure with the aid of our trusty GPS. And what an adventure we had.

We almost got lost (I think we went around a roundabout three times before we got the correct exit) on the way to the restaurant but after an hour-plus journey from Petaling Jaya, we found Aunty Aini's.

It's not an easy place to find if you're travelling at night to a place you've never been. Aunty Aini's Garden Cafe is not lit with neon signs, in fact you could pass right by it if you weren't looking for the place. If not for a small road-side signboard and our GPS we would have driven pass it.

From the outside, you'd think this was someone's home. In fact, Aunty Aini and her family do live just behind the restaurant. Walking in through the wooden gates, you're greeted by a simple but lovely water feature that immediately puts you at ease.

The entrance to the dining area is lined with Aunty Aini's plants. I was actually looking for her clitoria bush. Now, don't get any funny ideas like Mr. Ramsay did. 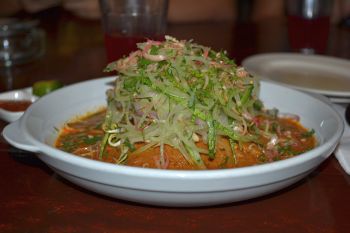 The laksa Johor had just the right blend of spices with loads of shredded vegetables and lemongrass.

The clitoria flower is what local Malays call bunga Telang. The blue/white flower is often used to colour foods like glutinous rice for kuih ketan or the Nonya chang. I did look hard for the plant but could not find it.

The dining area at Aunty Aini's is fairly spread out and can hold about 80 people comfortably. If you're hoping for an air-conditioned area, you're out of luck. But there's ample ceiling fans around and in the evenings it's pretty cool thanks to the trees surrounding the area.

Welcoming guess is the chef herself, Aunty Aini, who is as friendly as she seems on TV. While we were there, she went around from table to table greeting her patrons. She didn't drop by our table but we were served by her husband, who is just as friendly and accommodating. 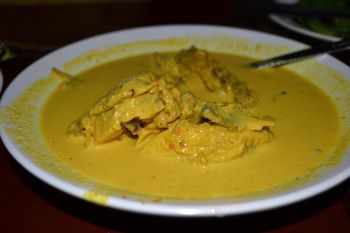 The lemak ayam had a creamy gravy and big pieces of chicken.

We did not have to wait for long until the first dish arrived. The laksa Johor had just the right blend of spices with loads of shredded vegetables and lemongrass (serai).

The gravy was thick, just the way I like it and although some of my friends said the lemongrass was overpowering, I found it to be just nice. The plate went around the table and by the time it reached the head of the table again, we had ordered another serving. This before the main dishes arrived.

The main dishes were served just minutes after the first laksa Johor. What Aunty Aini lacks in presentation, she surely made up in taste. But like a friend of mine pointed out, the ambiance was kampung-style, the food is home-cooked and you don't expect your mum to decorate your dishes, do you? “What's important is that it taste good,” she said. And boy, the food was just superb.

The ikan asam pedas with ikan Jenahak was not too spicy but it was sour and truly lived up to it's name. The menu states you get the fish head but we had the tail end and it came with loads of meat. Despite the fish bones, I loved it. I thought it could have been a little more spicy but Aunty Aini does cater to foreigners so it was mild.

The lemak ayam went pretty fast on my side of the table. Creamy gravy and big pieces of chicken is just what you want when you have a heaping plate of rice in front of you. The daging salai was so tender we really didn't even have to chew it. We loved it so much, we ordered another round later in our meal. 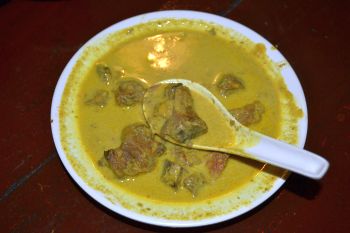 The daging salai was so tender that you didn't even have to chew it. Below: Burung puyuh. 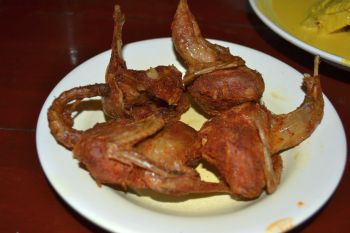 My favourites were ikan asam pedas, the kerabu paku (although I didn't quite like it with the kerang) and the laksa Johor. The rest were good, but should I be able to find this place again, I'm going to satisfy myself with just these dishes.

A couple of dishes most of us didn't particularly like were the gulai lemak tempoyak with mussels. The fermented durian was just a little too pungent even for a few of us who are durian lovers.

But the dish didn't go to waste, two brave souls at the end of the table practically licked the gravy up. They, however, were warned that the car windows would be down on the way home.

The other dish we truly did not enjoy, we actually took one mouthful and left it there, was the mee rebus. I don't know how locals in Nilai eat their mee rebus, but us KL-lites were not expecting it to be drowned in what can only be explained as coriander pesto. The taste and smell was just too much.

Apart from those two dishes, I was also disappointed that Aunty Aini's famous beef rendang was not available on the menu.

Aunty Aini's husband explains that rendang has to be cooked in bulk and not everyone who comes to the restaurant would order the dish and at Aunty Aini's, leftover food is not kept for the following day, so unless there's a huge group coming and if you order in advance, you'll not get to try the beef rendang.

Would I return to Aunty Aini's? I would if I could find it again. But for anyone interested in an adventure of finding this place in Kampung Chelet, it's well worth the trip.

But the best part of our dinner at Aunty Aini's is that the total bill for our dinner came to only RM250.

Aunty Aini also serves western food, but why would you want western food when it's the local dishes this place is known for?