What a sweet success story! A team of Malaysian pastry chefs have been crowned champions of the Coupe du Monde de la Pâtisserie (or World Pastry Cup) for 2019!

The team comprising Patrick Siau (head chef at the School Of Hospitality, Sunway University) and contestants Tan Wei Loon, Otto Tay and Loi Ming Ai beat the teams from Japan and Italy in the finals of the competition on Jan 28.

The World Pastry Cup is an international event held biennially in Lyon, France. This year's edition, held on Jan 27 and 28, marked the 30th anniversary of the competition.

It is held to recognise the best young pastry talents from around the world, with a selection process involving more than 50 national rounds and four continental selection events in Asia, Africa, Europe and Latin America.

Malaysia was one of 21 teams that qualified for the finals, with each team made up of three competitors for each of the three categories (sugar, chocolate and ice).

The theme for the competition was 'Nature, Flora And Fauna' and it introduced a new challenge: teams had to come up with a 100% vegan dessert that does not use any product of animal origin.

Other challenges included having to create a chocolate dessert with a biscuit made of honey, as well as (at least) one transparent item made with blown sugar.

Here's a look at the Malaysian team's winning desserts:

At least 21 dead after bus falls into reservoir 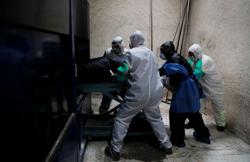