One of the drinks you'll learn to make at the course is the martini. Stirred, of course. Photo: The Star/Raymond Ooi

On the surface, bartending looks like an easy job. All they do is stand behind a bar, take orders, mix a few cocktails, pour some beer, and that’s all, right?

Well, as it turns out, that’s just a small part of it. There is a lot more to bartending than just making drinks. There’s the hours of preparation – cutting fruits, juicing limes, making ice, checking the ingredients and spirits stocks, cleaning glasses, making sure that the bar is clean and everything is in place, and more. And that’s BEFORE the bar is even open.

If you want to know more about what the job is like, or just want to learn how to make cocktails, check out the RAD Bartender Course Junior Edition, a five- to six-hour comprehensive course on the fundamentals of bartending developed and conducted by Shawn Chong of Omakase + Appreciate, which placed in the top 10 on the inaugural Asia’s 50 Best Bars 2016 list.

The course features modules that aim to provide bartenders, and even consumers, with a basic understanding and techniques necessary for working behind a bar.

“I’ve had people watching me behind the bar and coming up to ask me where they can learn to do what I do, so I started this course as a way for people to get an idea of how a bar works,” Chong said.

“At the end of it, you will get an understanding of the ingredients we use, what needs to be prepared in your back bar, and how to make cocktails.”

The course is one of the services provided by Rad Impressions, a company that specialises in beverage education programmes, and organises bar courses, and cocktail workshops for consumers. The company also offers bar consulting services, and even a whisky course called The Whisky Academy, which is a three-tiered certification course for whisky enthusiasts who want to take their appreciation to new heights.

Shawn Chong started this course to give people a better understanding of bartending and how a bar works. Photo: The Star/Raymond Ooi

But back to the bartending course. As the title of the junior edition course suggests, this is merely an introduction to bartending. Completing it does not mean you’re ready to become a professional bartender, nor does it give you a licence to go to bars and instruct the bartenders on how to make your drinks. But it WILL give you a better appreciation of a bartender’s job, and a better understanding of how a bar works.

Sure, there were parts of the course that I already knew quite a bit about (hey, you don’t write a column about alcohol for eight years without learning a few things along the way), such as the basics of what alcohol and spirits are. But there was still plenty I did not know. Here are some of the things I learnt during the course.

Mise and what? Mise en place is a French term to describe the preparation of dishes and ingredients before the beginning of service. While it is commonly used by chefs, mise en place is equally important for bartenders.

“It may seem simple, but it is actually the most important part before actually making a drink,” Chong said.

In this segment, we learnt that everything in a bar has its place, and that it is very important that the bartender has a system that makes it easy for him or her to make the drinks in the quickest and most efficient way.

Ice is to bartenders what fire is to chefs. Photo: The Star/Raymond Ooi

2. The importance of ice

Ice is simple, right? After all, it’s just frozen water that you use to chill a drink. Well, when you’re a bartender, ice is arguably one of the most important components of the job.

“Ice is to bartenders what fire is to chefs,” Chong declares. “Without ice, a bartender cannot properly produce drinks.”

While the primary function of ice is to chill a drink, a bartender can wield it in different ways. Besides chilling, bartenders also use ice to mix and to dilute the drinks.

Also, did you know that there are actually FOUR types of ice that can be used for making drinks? They are cubed, crushed, cracked and block.

“It’s mostly a matter of size. The bigger the size of the ice, the more solid it is, then the more control you will have over it when making cocktails,” he said.

Sugar is important to give cocktails a sweet element, especially when you make fruity drinks. Photo: The Star/Raymond Ooi

Sugar is another integral component of cocktail making, and again, we learnt a whole lot more about how different sugars work, how it is made, the different sweetness levels, and how to make syrups to use in cocktails.

“Sugar is another ingredient a bartender cannot do without. We need some level of sweetness in the drinks, especially in fruity drinks,” Chong says.

“In the bar, we usually use two different types of sugars. One is called simple syrup, which is made with one part sugar and one part water. It is easy to dilute, and adds volume to our drinks. And of course, make it sweet, and create a balance in the drink. We also have a rich syrup, which is two parts sugar to one part water. This syrup can lend a heavier texture to the drink.

Limes are another important part of cocktail making as they add a sour element to the drinks. Photo: The Star/Raymond Ooi

From sweet, we move on to sour, as Chong also covered how important citrus fruits are to cocktail making, especially limes and lemons. Many classic cocktails call for a sour component, which is usually added through lime or lemon juice.

What I did not know was that Malaysian limes actually taste different to limes from other countries.

“I’ve been to different countries for competitions, and the sourness of limes depends on variety. Malaysian ones tend to be a lot more sour,” he said, adding that different drinks will call for different levels of sourness, thus it was important to know the differences between the flavours of lemons, limes, grapefruit and other citrus fruits.

Another aspect that we learnt about was garnishes, which Chong said is an often overlooked part of cocktails. Here, we learnt how to make the basic types of garnishes, from orange flags to wheels, coins, wedges and slices.

The whisky sour cocktail (complete with orange flag garnish) is one of the cocktails participants will learn to make at the workshop. Photo: The Star/Raymond Ooi

It was here that I learnt that shaking a cocktail looks easy, but there is actually a lot more to it than just shaking the shaker as hard as possible. There are dry shakes, hard shakes, rolling shakes ... each different sort of shaking style will give you a different result. And yes, there IS a big difference between a shaken martini and one that is stirred.

Of course, this article barely scratches the surface of the entire course, which in turn only teaches you the basics of bartending. There is a whole lot more that I haven’t mentioned, so if you’re interested in learning more about the RAD Bartender Course Junior Edition, e-mail cheers@rad-impressions.com, or visit their Facebook page. The next classes are scheduled for Feb 10 and March 17.

Michael Cheang nearly stabbed himself in the eye with his orange flag garnish. Clearly, he needs to practise his bartending skills more. Drop him a note at the Tipsy-Turvy Facebook page or follow him on Instagram. 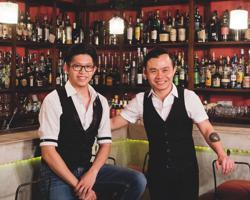 Omakase + Appreciate, once one of Asia's Top 10 bars, to close for good 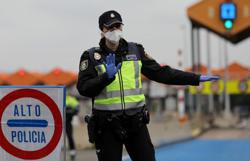