Sheila Singam with her art piece called 'Empress Ki', inspired by a Korean television series by the same name. Photo: The Star/Azman Ghani

When Sheila Singam was in secondary school, a teacher told her that she “couldn’t do art to save (her) life”. Fast forward several decades later, the corporate trainer and coach, now her early 60s, has launched her first solo art exhibition in Kuala Lumpur and even sold four of her art pieces prior to the event.

“I was only 14 when a teacher put this limiting belief in me after looking at my art, telling me ‘you can’t do art to save your life!’ and as it was an exam subject, I had to drop art and take up music instead, she recounts.

“For many decades, I held on to this limiting belief that I couldn’t draw or paint, and wasn’t artistic,” she says.

But Sheila is now known for her mixed media acrylic paintings.

“Art was something I just had to do. I always felt that there was an artist in me waiting to burst forth,” she says.

Sheila ventured into art in 2016 when she started using adult colouring books while accompanying her husband, journalist KP Waran, a cancer patient, at the hospital.

“I would bring my colouring books with me when I went to the hospital to look after him.

“That’s when my creativity grew because I was experimenting with lots of colours. It kept me busy and calm during the months of my husband’s illness,” she says. 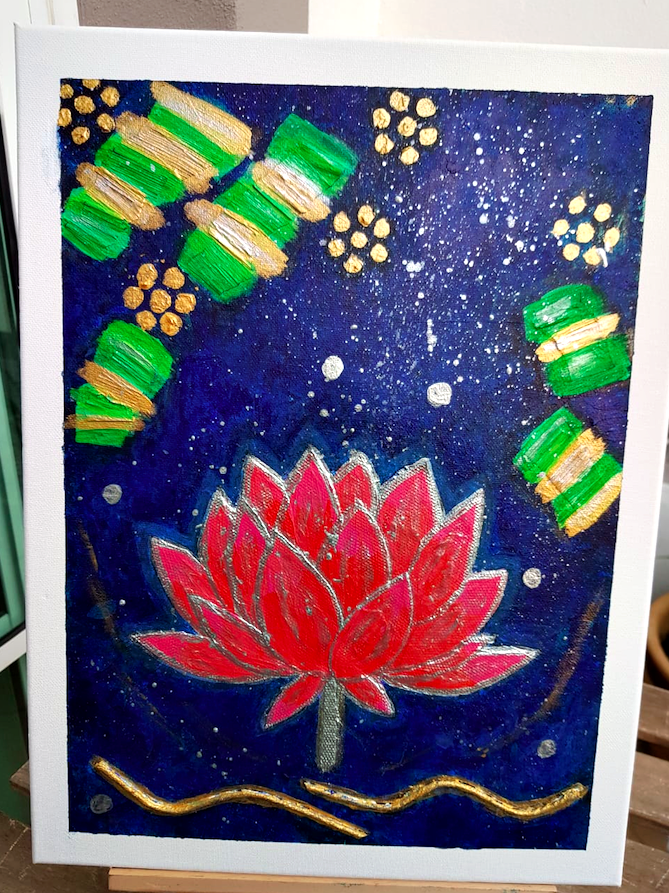 Sheila Singam also used excess PPE materials to create flowers in some of her pieces as a tribute to frontliners during the pandemic. Photo: Kaleidoscopic ArtIn 2018, Sheila’s husband passed away after a nine-month battle with cancer and her brother Mervin Singham returned from New Zealand to visit her.

The established abstract artist encouraged his sister in her artistic endeavours.

“He looked at my colouring books and said that I had a good sense of colour and should pursue art,” she says.

“I told him I couldn’t do art because of my limiting belief but he encouraged me to ‘practise what I preach’. He said ‘you’re in the business of training people to unleash their potential so why are you holding onto this limiting belief’,” she reveals.

Sheila decided to do something about it.

“I signed up for art classes at Art Therapy and my teacher, Gerald, in his quiet gentle way, encouraged me to explore the kind of art that resonates with me,” she says.

He gave Sheila a canvas and asked her to paint what she wanted to.

“He said to visualise in my mind what I wanted to do so I painted some flowers. As I was doing it, he gave me a palette knife with some jazzel (paint) and showed me how to stroke it on the canvas. That was liberating because I like textures,” she says.

Sheila learnt how to stick materials – string, cardboard, fabric, etc - onto the canvas and discovered she had a love for mixed media acrylic art.

“Art is more than therapy to me, it’s like going on an adventure or journey.

“In my job as a corporate trainer, I’m very structured and organised when dealing with clients and coaching, but art gives me the freedom to step out of that,” she says, adding that even her teacher was surprised at her achievement and refers to her as a “colourist”.

Her first piece, which she calls "Chaos" because she “didn’t really know what (she) was doing at that time” is featured in her exhibition. Sheila Singam says that the brain is an amazing organ that can adapt and change according to your needs. Photo: The Star/Azman GhaniThere are many lessons in life that one can learn from art, says Sheila.

Sheila’s interest in neuroplasticity or the ability of the brain to adapt and change according to one’s needs spurred her to name her exhibition “Forest in the brain”.

“When a brain is healthy, it’s like you’re flying over a thick, dense forest where you can’t see any empty land but a just canopy of green. This represents a brain with strong neural connections,” she explains.

“But other times, when you’re flying over a forest, you can see vast areas have been cleared and there’s a lot of empty land. This represents a brain that’s vegetating and not being used, where learning doesn’t take place. It’s also one that's constantly negative and complaining. So the brain of a person who has dementia or Alzheimer’s is the forest that has been cleared. But the brain that is healthy is like the thick, dense forest," she says.

The brain, she adds, is an amazing organ which can adapt and change according to your needs.

"This is why people who suffer from brain damage or a stroke can make new connections and recover their potential,” she says adding that as one grows older, it is so important to stay healthy, keep busy and learn new things. 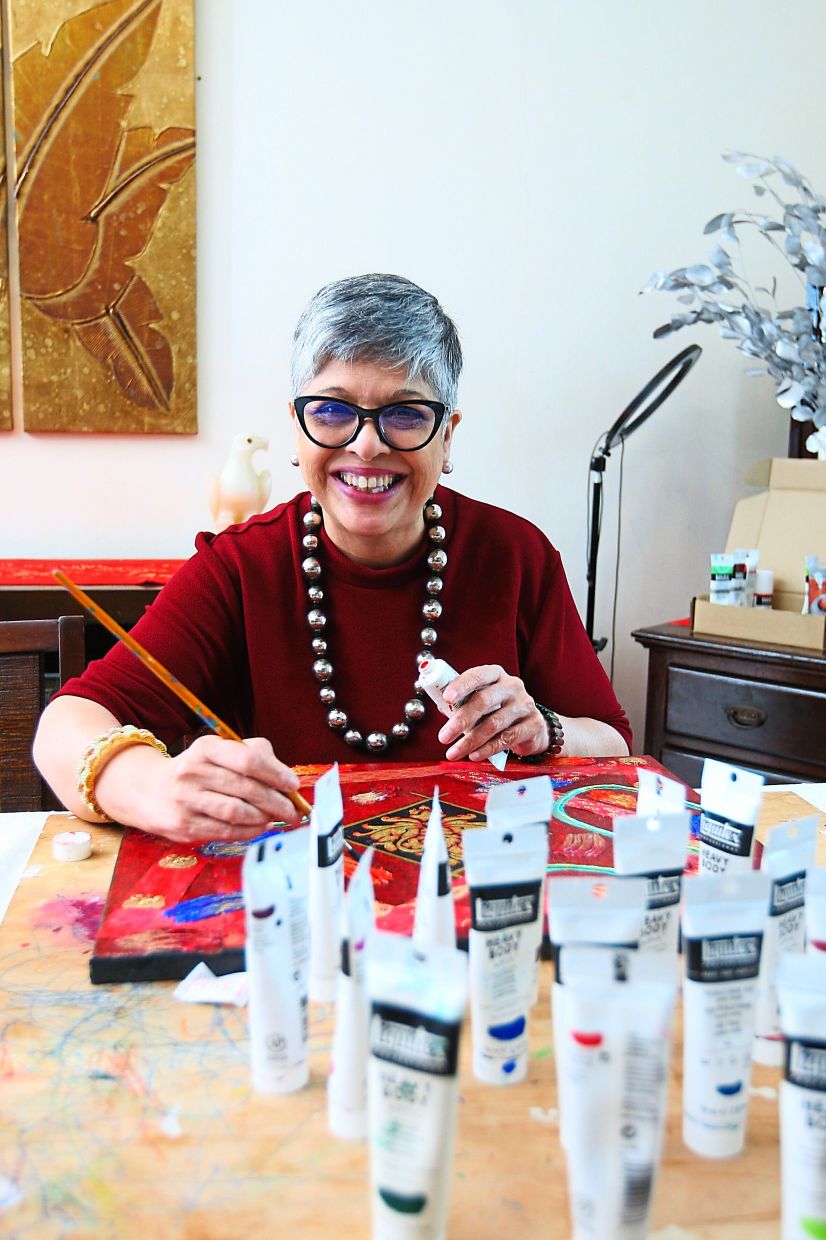 Sheila Singam is giving 20% of the proceeds from her debut exhibition to cancer patients. Photo: The Star/Azman Ghani

During the pandemic, Sheila started learning new things. She took a graduate diploma in innovation and design thinking.

“I received requests from clients for programmes to help them become more creative and innovative so I embarked on my post-diploma course to equip myself, increase my knowledge and improve my skills," she says.

Sheila admits it’s when you don’t have a teacher that real learning takes place.

“That’s when your skills level up because you’re forced to pick it up yourself when there’s no one to go to for help,” she says.

During the pandemic, when she couldn’t attend her art classes, she ordered the art supplies and experimented by herself.

“My studio was my dining table,” she says.

“I learnt from YouTube and signed up for this course by Maria Grossbaum’s Abissimo Mixed Media Academy. During the recovery MCO, I also learnt art pouring with Annora Ong, an artist who died of leukaemia in Sept 2020.” 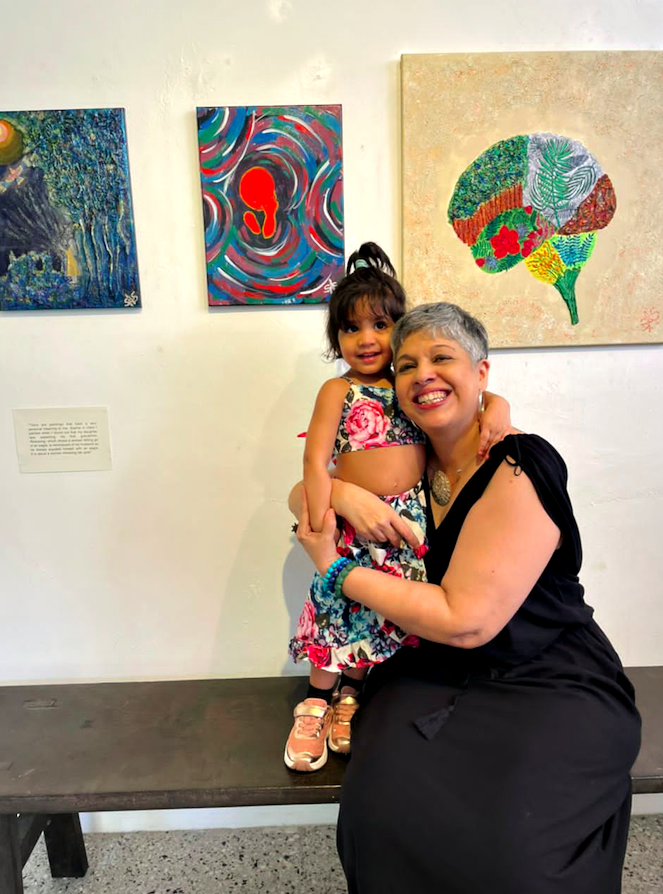 Sheila Singam (pictured with her granddaughter Sophia) with 'Sophia in Utero' (centre), the piece that she painted for her granddaughter. Photo: Kaleidoscopic ArtSheila says that she doesn’t just paint to express her creativity, but also for a good cause. She is giving 20% of the proceeds from her art sales to cancer patients (in memory of her late husband).

“While looking after my husband at the National Cancer Institute, I saw many patients in need: young men – sole breadwinners - who lost their income because of their illness, and wondered how they could survive because their wife isn’t working, and they’ve small children to feed too,” she says.

“Everyone has grandiose ideas about changing the world, but you’ve to start small. When you really want to make changes, start with one person at a time,” she says.

Sheila has started an enterprise called Kaleidoscopic Art for her charity work.

“I’ll continue to have exhibitions and 20% will always go towards a worthy cause that I believe in such as helping B40 single mothers start micro businesses,” she says.

Sheila says that her debut exhibition feels “surreal” but she’s pragmatic about it: “I don’t overthink, I just do," she says.

She started selling her art last year after sharing pictures of it on social media and getting positive feedback.

“My mum also encouraged me to sell my art because I was running out of space to display it. I had art piled up everywhere in my home and the pieces were getting bigger,” she says.

Sheila’s family plays an important role in her art.

“The people closest to me – my mother, my daughters, my friends - are my biggest critics so when they root for me, it’s really something.”

She has painted a piece “Sophia in Utero”, which she did when she found out that her daughter was pregnant with her granddaughter, Sophia.

“When I get good comments on social media, when people want to buy my art – it motivates me to press on,” says the former journalist.

Her exhibition will be held at Temu House until June 26, and available for public viewing on weekends from 10am to 4pm. More info at: facebook.com/temuhouse/ 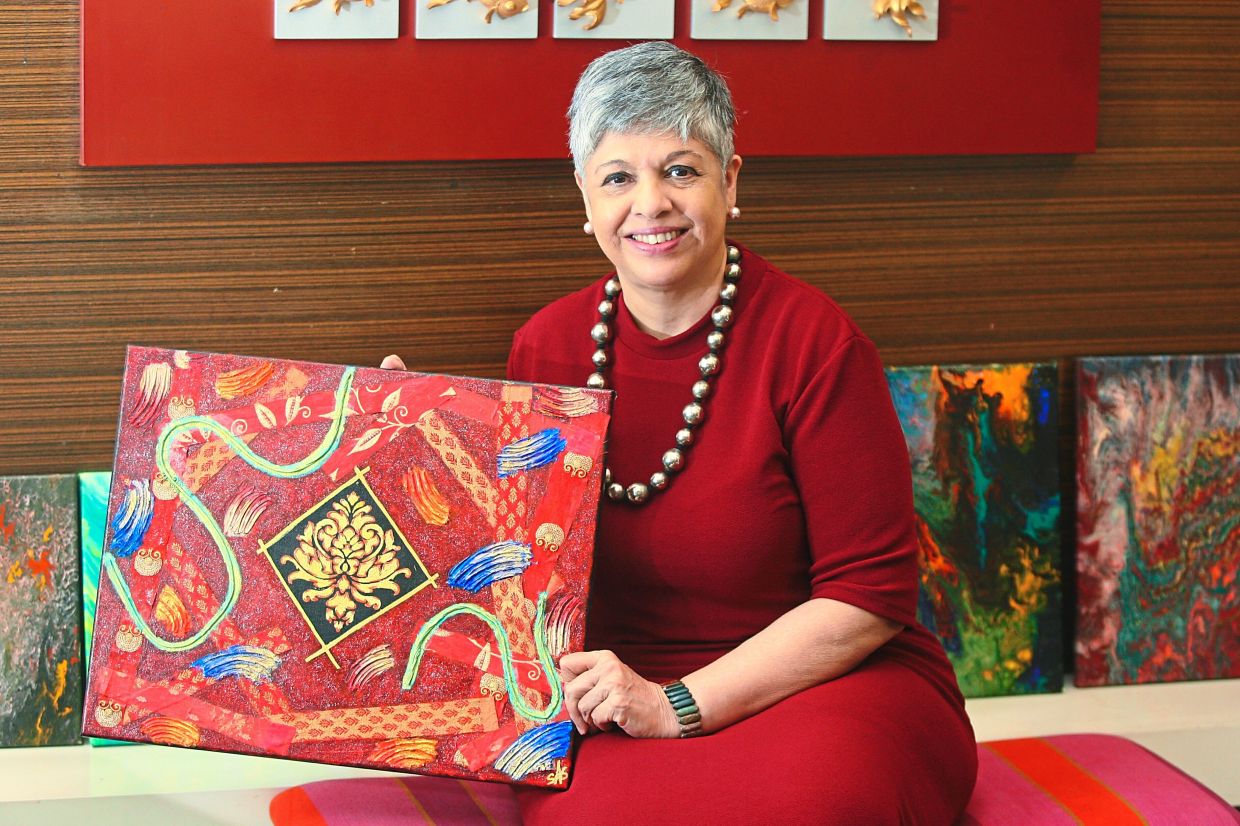 Sheila Singam with her art piece called 'Empress Ki', inspired by a Korean television series by the same name. Photo: The Star/Azman Ghani

Sheila Singam also used excess PPE materials to create flowers in some of her pieces as a tribute to frontliners during the pandemic. Photo: Kaleidoscopic Art

Sheila Singam with her first ever art piece which she calls 'Chaos' because she 'didn't know what she was doing' at that time. Photo: Kaleidoscopic Art

Sheila Singam in action at her home studio. Photo: The Star/Azman Ghani

Sheila Singam is giving 20% of the proceeds from her debut exhibition to cancer patients. Photo: The Star/Azman Ghani

Sheila Singam says that the brain is an amazing organ that can adapt and change according to your needs. Photo: The Star/Azman Ghani

Mixed media artist Sheila Singam at her studio which is her dining table at home. Photo: The Star/Azman Ghani

Fathers Day: Setting an example in being kind, compassionate and respectful

Fathers Day: Fatherhood is the greatest adventure of all

Fathers Day: 11-year-old boy says his dad is his hero

'Our pets kept us company, helped us through the pandemic' 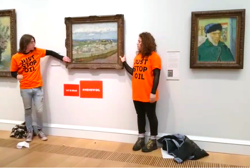 Dazzling Malaysian model reveals she was once less than confident about her appearance
Are good-looking people really more successful?
Tired of being ignored and judged, The Fat Squad was formed as a community advocating for fat people
The inspiring women in a YouTube village in Bangladesh
Older people seeking a good night's sleep:�Don't nap for too long
Disasters bring a rise in gender-based violence – this study explains why
Hollywood companies vow to pay travel costs for abortions
Advice from a triathlete: 'If you want to do it, make the time'
Filming yourself giving flowers to women is the latest trendy challenge on TikTok
She was too sick to make her wedding, so hospital staff brought it to her