Despite our many differences as a cross-cultural family, life is 'simple', says Ong and Michieletto. Photo: Jessica Ong

Although being a cross-cultural family means adjusting to each other's differences, life is pretty "simple" for Jessica Ong, her husband Federico Michieletto and their two children, Giacomo, 7, and Francesco, 5.

For them, what's important is knowing that they will be there for each other "no matter what happens".

“Your family are the ones who will be together with you, learning and sharing the laughter and happiness, in both the good and bad times, ” says Ong, 36, who is a digital marketing executive and copywriter.

Her Italian husband Michieletto, 50, is a chef and also the director of culinary arts at Berjaya University and the couple first met in 2011.

“Even though we’re a cross-cultural family, life is simple for us. We speak mainly English at home and we try to find Italian and Chinese cartoons for our children to learn our native languages,” says Ong. The couple has strict ground rules for their sons: Study first, play later. Photo: Jessica Ong“As parents, we work as a team to handle the household chores and children’s school day routine, while working at our respective jobs,” says Michieletto.

“As a family, we believe in earning as much as we can, saving and pre-planning for the future, especially investing in our children such as extra classes for Taekwondo, swimming, art and music, depending on their interests and strengths,” he adds.

The couple has strict ground rules for their sons: “Study first, play later. Finish important things first, then have fun and activities later."

“We also believe in letting them learn to make simple decisions from young such as what to eat, and what to wear, ” says Ong.

“We also believe communication is important. We often have pre-bedtime sharing on what we’ve gone through during that day. This is to let the kids express their feelings and learn to communicate,” she adds.

“Learning new things is also important for our kids - even if it’s just watching educational cartoons or YouTube videos,” she says, adding that they have even tried the Instagram Reels challenge together.

Since dad is a chef, it’s not surprising that a lot of the family’s activities and traditions centre around food.

Most of the cooking at home - about 80% - is done by Michieletto while Ong does cook simple dishes such as soup, steamed meat, vegetables, and others, the couple reveals. The children learning to cook at home during the MCO. Photo: Jessica Ong

“The kids are also learning to bake, make their own sandwiches, drinks like ice lemon tea, and other food... especially during the MCO, ” she adds.

Celebrating festivals is also a big thing in their family.

“We’ll decorate the home and plan the menu, and the food is home-cooked," says Michieletto.

“We must eat at home with Italian food - turkey, panettone and wine, with nice table decorations," he says. “We also celebrate an Italian festival, Befana Day, ” says Michieletto. "In Italian folklore, on Jan 6, children and adults across Italy celebrate this epiphany by stuffing their stockings and their faces with sweet treats, supposedly gifts from La Befana, a mythical old lady who comes down the chimney to bring candy to those who have been good and coal to those who have misbehaved. The modern way is to have sweet ‘coal’ instead of traditional charcoal,” he says.

But despite all the food, the couple believes in life balance - staying healthy and eating in moderation.

“We have family exercise sessions every weekend. Before the pandemic, we would go swimming or jogging in the playground, ” says Ong, who is also a part-time fitness instructor.

The couple reveals that their daily life hasn’t been impacted much by the pandemic since they don’t usually go to crowded places like cafes nor hang out at the shopping mall much. But before the pandemic, they did go on fun, cultural and historical outings with the children such as factory and farm visits, and even to the beach. Mothers Day and their wedding anniversary this year. The pandemic hasn't impacted their celebrations much since they usually celebrate at home. Photo: Jessica Ong

The MCO has made them realise how important it is to nurture the studying habit in their children through storytelling, YouTube videos, and using Google as a reference. DIY crafts by the boys at home during the MCO. Photo: Jessica Ong"We try to get the kids to balance their digital screen time in front of the computer or TV with other activities since Giacomo who is in Primary One and Francesco who is in kindergarten, can’t go to school and are studying online during the MCO," says Ong.

The couple believes that International Day of Families which falls on May 15 every year, is another good reason to celebrate being a family.

They are excited about it and plan tell the rest of their family members, including Michieletto's large family in Italy.

"I usually video call my family in Venice, every weekend," he says.

Since the special day falls during MCO 3.0, they will be spending it at home.

Ong and Michieletto plan to get the children to make DIY crafts related to the occasion using recycled materials such as paper boxes, cans, bottles, and others, and it can be a learning experience for them. They plan to also discuss together what they appreciate as a family: their differences which make them unique and yet complement each other. 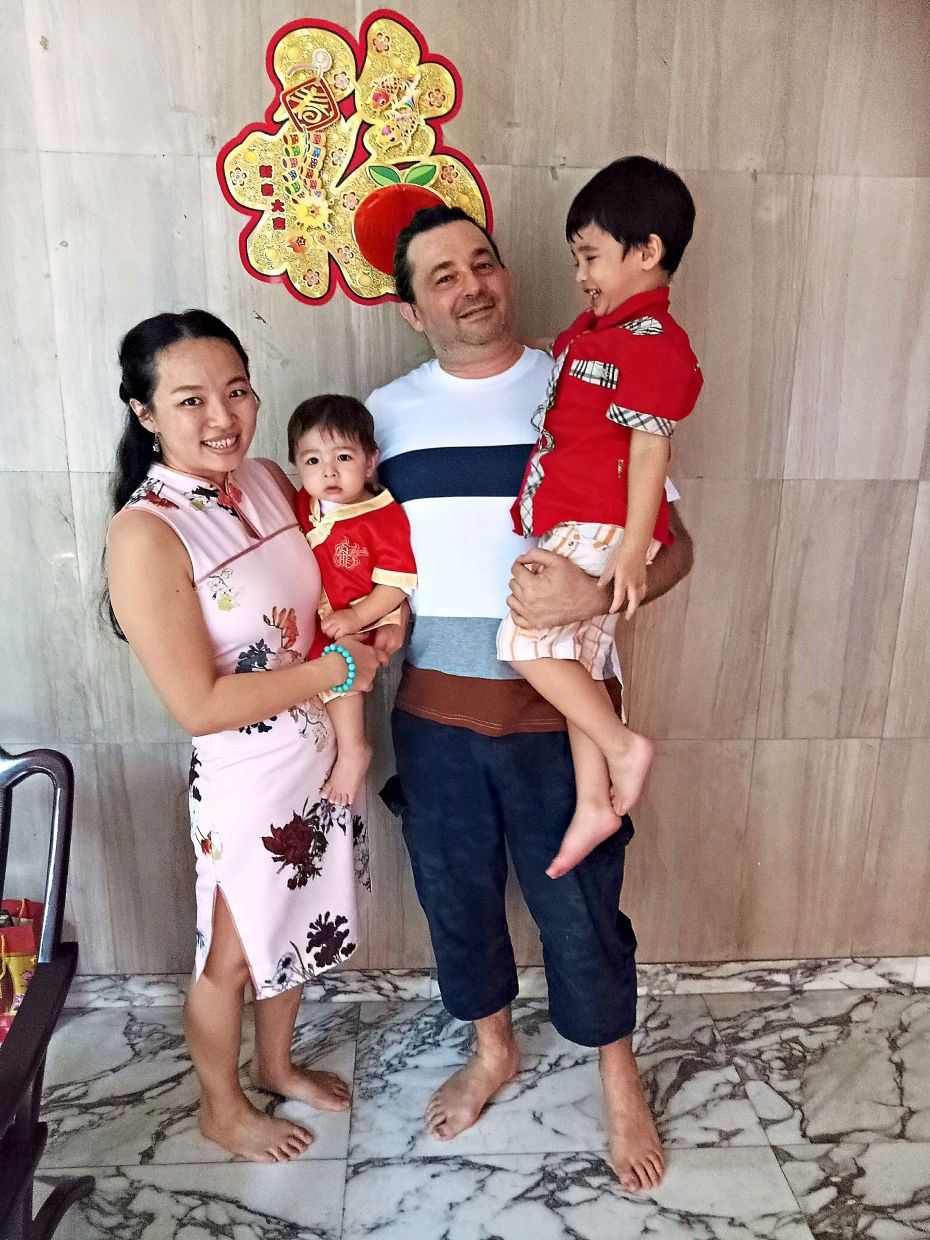 Despite our many differences as a cross-cultural family, life is 'simple', says Ong and Michieletto. Photo: Jessica Ong

Mothers Day and their wedding anniversary this year. The pandemic hasn't impacted their celebrations much since they usually celebrate at home. Photo: Jessica Ong

Food is a big thing for this family because Michieletto is a chef. Photo: Jessica Ong

A day at the park before the pandemic. Photo: Jessica Ong

The children learning to cook at home during the MCO. Photo: Jessica Ong

DIY crafts by the boys at home during the MCO. Photo: Jessica Ong

DIY craft by the children during the MCO. Photo: Jessica Ong