Mariam Oyiza, a champion for women in northeast Nigeria 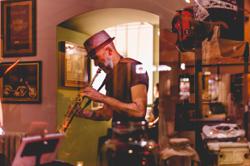 Oyiza runs a small but busy charity helping women and children in the region where a decade-long bloody jihadist insurgency shows no sign of ending. Photos: AFP

The 26-year-old runs a small but busy charity helping women and children in the region where a decade-long bloody jihadist insurgency shows no sign of ending.

Today, a mother called her because her 12-year-old daughter is four months pregnant, after being raped with a knife to her throat by her 63-year-old neighbour.

"This particular case haunts me a lot, she's just too small," Oyiza, founder of Learning Through Skill Acquisition Initiative (LETSAI), said in an interview.

"She's from an area that has the highest number of sexual and gender-based violence cases. I think in 2020 I received 200 reports from that area. There are so many rapes I can't even count," said Oyiza, wearing a chocolate-coloured veil.

She took police officers to where the girl was assaulted, but they could not find the perpetrator.

"He's a former policeman and community leader so people are covering up for him, hiding him."

Oyiza's drive for justice is part of her ambition to shake things up in this mainly Muslim and conservative part of Nigeria, where women are often subdued and married off young.

Originally from Kogi state in Nigeria's central Middle Belt region, Oyiza decided to focus her work on women and children because she is a survivor of gender-based violence herself and knows what poverty is like.

"At times I didn't have food, I was physically abused, I'm an orphan, so I feel that by giving them what I never had, it's going to give me some sort of self-satisfaction," she said.

"I still don't feel satisfied yet," she added with a smile.

It all started when she was at university in Maiduguri, studying radiology. Her biggest challenge leading her charity is ageism, she says, from donors who tell her she needs to grow more.

A group of women living in camps for internally displaced people would beg on campus and Oyiza decided to teach them how to make soap.

Now with her NGO that employs 15 people, she wants to do just that, empowering women through work.

She is also a strong advocate against child marriage, widespread in the region, and provides counselling for women formerly associated with Boko Haram who face stigma and violence when they come back to their communities.

Oyiza said one of the girls she encountered in her work repeatedly attempted to blow herself up. Militants in the region often recruit women and children to strap explosives to themselves.

Now in a government rehabilitation programme, the girl told Oyiza that living with the insurgents was "the only place she gets love."

"These are the challenges and we need to try and understand these girls' pain and be able to reach out to them and put ourselves in their position."

Oyiza often takes to social media to voice her anger and frustrations.

At one point, she left Borno state for her own safety, but came back.

"If I don't stand up for myself then most of the women who I am trying to help, they may just run away as well... So I'm still here. I'll die here," she said, laughing.

Her biggest challenge leading her charity is ageism, she says, from donors who tell her she needs to grow more, and from some of the women she helps, who think an unmarried woman with no children will not understand them.

Only one of her projects is donor funded, by the UN's Women's Peace and Humanitarian Fund, but she doesn't let that stop her and manages to record successes.

A few weeks after that first phone call about the 12-year-old girl who was raped, Oyiza is "ecstatic".

"We have successfully relocated her and her family from that community... I am glad I was able to pull them out of there."

There might be no justice for the young girl but for now at least, she is safe. - AFP

Starchild: A Malaysian boy shares his creative writing titled, The Musical Spark
Stalked, harassed, bullied: Domestic violence victims continue to fear for their life
Latin America's female scientists pack a big punch despite glass ceiling
Despite many differences, life is 'simple' for this cross-cultural family
Pets are family too, says designer with three 'furkids'
Homeless girl with the secret sauce to success
Meet China's elderly influencers cashing in on the internet
Hit by Covid, Senegal's women find renewed hope in fishing
Ain: 'I'm just an ordinary girl speaking up for what I know is right'
Broaching a difficult subject: Death