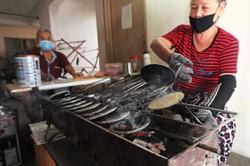 Lau and her husband have been making the love letters from morning till night to fulfill their CNY orders. Photo: Bernama

The aroma of the fragrant and freshly baked crispy kuih kapit (love letters) filled the air at Block 7 of Pelangi Apartment, Gat Lebuh Macallum in Penang, a reminder that the Chinese New Year celebrations are drawing close.

The elderly couple in their seventies can be seen outside their home every morning making the Chinese New Year goodies, the way they have been doing it for the past 20 years.

Lau Poh Kin, 70, mixes the batter before pouring it into moulds. She then places them over a charcoal fire until the love letters turn golden brown. Then, her husband Chew Hup Chye, 75, takes over, quickly folding the delicacies and arranging them into tin containers.

Chew, who formerly worked as a factory supervisor, says they started making the kuih kapit and collecting pre-orders around November last year.

"Since then, we have been making kuih kapit every day, from sunrise until sunset,” he says, adding that they could fill around 20 tins a day.

Although Chew can't recall exactly how many tins of kuih kapit were sold last year, he said that he had orders coming from all over Malaysia, even as far as Kuala Lumpur and Johor.

He said his kuih kapit had even made its way to Singapore and Australia for his customers to enjoy in previous years.

"However, due to the Movement Control Order, interstate travel has been restricted and so we have a narrowed down our scope of customers, selling and delivering in Penang only, ” he says.

Because a number of his customers were from outside Penang, he has received calls for cancellation of orders.

"Back then, we could sell around a thousand (tins of kuih kapit) a year, but I think we can manage to sell somewhere in the hundreds for this year, ” he adds.

Chew sells two variants of kuih kapit: one that contains pork floss filling, which is sold for RM30 per tin, while the other contains no filling, selling at RM28 per tin. - Bernama