Large numbers of young Thai women are calling publicly for change, emboldened by widespread demonstrations to demand the departure of Prime Minister Prayuth Chan-ocha and reforms to the powerful monarchy. Photos: REUTERS

Napawn Somsak took to the stage in her school uniform, her hair in pigtails, to denounce sexism in Thai society and question the treatment of a royal princess - an act unthinkable before the protests that have roiled the country in recent months.

Before a cheering crowd of more than 2,000 people in the northern province of Chiang Mai, the 18-year-old demanded to know why women are paid less than men and cannot be ordained into the influential Buddhist monkhood.

Somsak is among the large numbers of young Thai women calling publicly for change, emboldened by widespread demonstrations to demand the departure of Prime Minister Prayuth Chan-ocha and reforms to the powerful monarchy.

"If we believe that everyone is equal and there is a need to reform the value of patriarchy in Thai society, then no one, including the monarchy, should be exempted," she said.

The protests have swept away a longstanding taboo on discussing the royal family, allowing Somsak to refer in her address to a royal princess who was stripped of her titles after marrying a foreigner - although she stopped short of naming her.

Princess Ubolratana Rajakanya Sirivadhana Barnavadi was required to give up the title Her Royal Highness after marrying an American fellow student while studying in the United States.

The Royal Palace and the Department of Women's Affairs and Family Development declined to comment on the protests, which began as political but have expanded to cover everything from corruption in the military to women's rights.

The Palace has made no official comment on the protesters, but on Sunday, King Maha Vajiralongkorn said "we love them all the same" in his first direct public comments on months of demonstrations.

Protesters say they do not seek to abolish the monarchy, only reform it. But the Thai constitution says the monarchy is "enthroned in a position of revered worship" and conservatives are horrified by such attacks.

Many of the young protesters are students who also complain of a school system that emphasises obedience and tradition, from lining up daily for the national anthem to strict rules on uniforms, haircuts and behaviour.

"The political space is opening up for young girls, who have long been suppressed," he said.

At protest sites throughout the country, people are being asked to sign petitions calling for abortion and prostitution to be decriminalised. 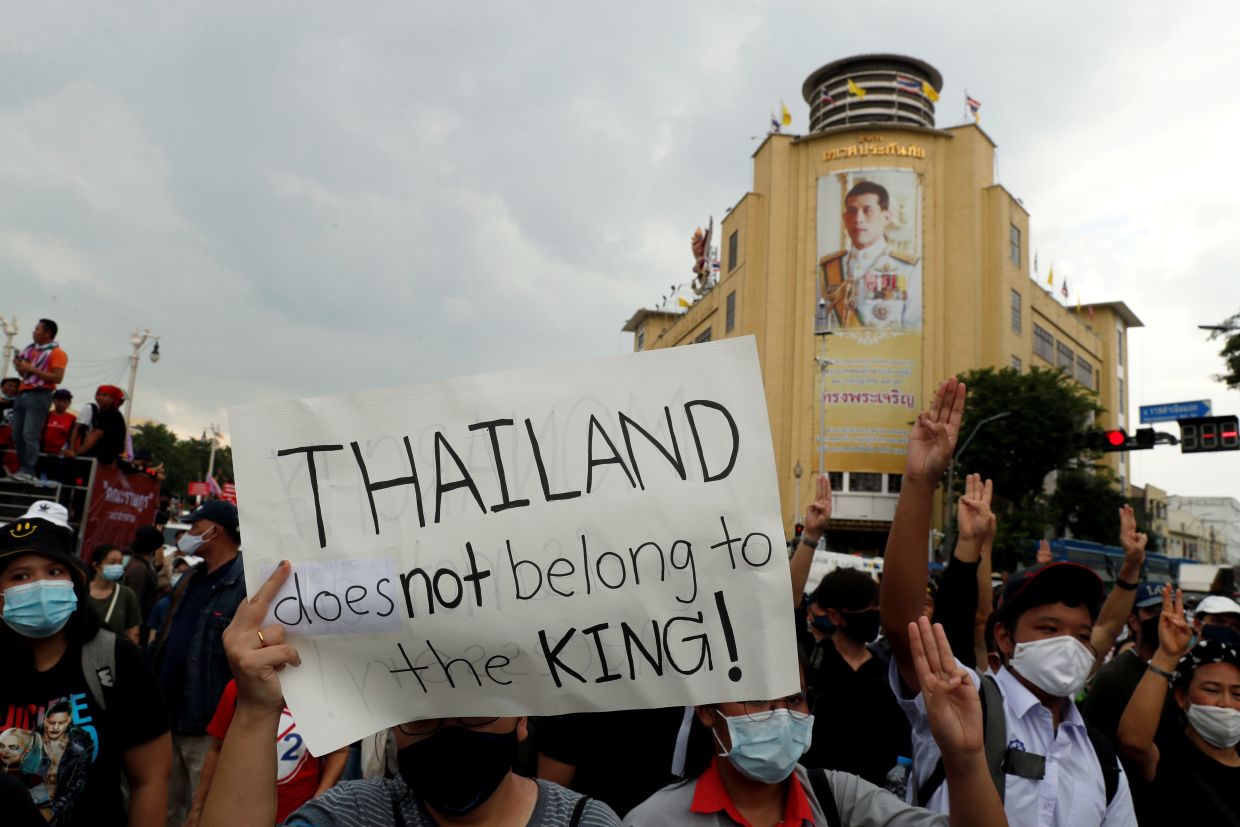 Thai student groups have laid out 10 demands for change, including reducing the king's constitutional powers, personal control of the royal fortune and of some units of the army.

Women for Freedom and Democracy, a pressure group that formed in August, distributes sanitary pads and has also developed an online system to report sexual harassment.

More than 40 cases have been reported and it is providing legal advice on some.

But it is the group's organised "pussy painting" - colouring in an image of a vagina - that has garnered the most attention.

"People are excited because normally we don't talk about the vagina in public," said Kornkanok Khumta, a member of the group.

"As time goes by, people are getting better at colouring and they feel empowered that their sexual organ is mentioned in a protest site."

King Vajiralongkorn was officially crowned as constitutional monarch in May last year after first taking the throne following the 2016 death of his widely revered father, who reigned for 70 years.

He has been married four times and his relationships with women have been the subject of scrutiny.

Last year, he stripped his royal consort of her titles and military ranks for being "disloyal", only to reinstate them in September.

Thai student groups have laid out 10 demands for change, including reducing the king's constitutional powers, personal control of the royal fortune and of some units of the army.

Chumaporn Taengkliang, who co-founded Women for Freedom and Democracy, wants them to add one more demand - that impunity for domestic or sexual violence should end.

"The monarchy is an important role model for the country, and if they have impunity when it comes to domestic or sexual violence, it is not surprising that a husband or father has impunity when they use violence among family members," she said.

"In a society in which people of all levels are oppressed, women are oppressed even more. They can't stand it any more." - Thomson Reuters Foundation