For Bella (left), the adventure at Tirai Waterfall symbolised Merdeka in more ways than one. Photo: Bella Hanim

It was like a roller coaster ride, says Nazrilazdin Jamaludin, president of the Persatuan Sukan Mendaki Kedah, of the group’s recent excursion to Tirai Waterfalls in Jitra, Kedah.

It was both challenging and a lot of fun, he says. Though the group regularly arranges excursions – most weekends are planned way ahead of time – this trip was extra significant as it was their “extreme Merdeka adventure”.

They abseiled 50m down the falls with the Jalur Gemilang flying proudly at their side. Literally.

“We can celebrate Merdeka in many ways but as a group who loves nature and Malaysia’s forests, we wanted to do something different and extreme.

“The significance? We wanted to demonstrate how, because of Merdeka, we can go anywhere we want safely – even deep into our jungles – and enjoy the beautiful flora and fauna that Malaysia has to offer, ” says Nazrilazdin

Their journey started at 7am last Saturday. The group of 22 assembled at Pekan Changlun (about 42km from Alor Setar) where they got themselves organised and into the four wheel drives that were pre-arranged.

“The ride from Changlun to Sungai Kechil Wang Perah was bumpy because it’s not a trail that’s used very much. At one point, because a bridge had collapsed, we had to get down and build a make-shift ‘bridge’ for the vehicles to go through.

“It felt like we were in a roller coaster ride! We then hiked about 5.6 km through the dense but flat trail to reach the top of the waterfalls before abseiling 50m down, ” says Nazrilazdin, 48. The journey to Sungai Kechil Wang Perah was challenging but exciting. Photo: Bernama

It wasn’t the first time the club had organised a trip to Tirai Waterfalls but spirits were high because everyone was grateful to be out hiking again after the movement control order restrictions imposed earlier in the year because of the pandemic.

“We wanted to assemble a big group because celebrating Merdeka alone isn’t as fun or meaningful as doing it in a group. Also, after the year we have had because of the pandemic, it was extra meaningful to do this as a group, ” he says.

The hikers came from all over Kedah – from as far as Langkawi – and also Penang. The oldest in the group was about 57 years old and the youngest members in their 20s.

“We are a mixed group but all of us love the outdoors, ” said Nazrilazdin, a contractor, who has been hiking and participating in adventure sports since his teens and hiked up Gunung Korbu in Perak when he was just 19.

The Persatuan Sukan Mendaki Kedah was established in December 2018 and has about 120 members from all over the state.

Goh Sieow Ying joined the club a while back and loves participating in the group’s activities because “it allows me to meet people who are always full of positivity”.

“I love extreme sports and the meeting and connecting of like-minded people transcends language, race and religion. The process of rock climbing and extreme sports also helps us bond and communicate as a team. “It also allows us to move beyond our personal fears and challenge what we can achieve, ” says Goh, 34, who is trying to encourage more of her friends to join the group.

“I wish more people will step out of their comfort zones and join us. I am trying to introduce more people to this wonderful adventure group and get to know all the wonderful places in Kedah, ” says the mother of one.

For single mother Bella Hanim, the Merdeka excursion was meaningful in many ways.

“It was my first time at Tirai Waterfalls and it was really a thrilling adventure, especially when we had to cut a tree and construct a bridge so that our vehicles could go on. That was really a new experience, ” says Bella who has been hiking with the group since 2017.

“This sort of activity is great because everyone has to help each other and work together to get up and down the falls.

“That’s what Merdeka is about, after all, and that’s also how

we have managed to fight the pandemic as a country, ” she adds.

The trip also helped her face her fears and appreciate her own strength, something she wasn’t sure she possessed.

“Merdeka for me is being free - this includes being free from things that have held me back in my life.

“I can’t believe it did this (abseiling) because I have a huge fear of heights and (being in the) water! But, this showed me that I am strong and tough, ” she says. 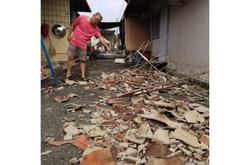