Lagos leads the "Las Guerreras" soup kitchen, which prepares lunch for families with few resources who have been affected by the pandemic. Photos: AFP

LONG months of a pandemic lockdown and economic crisis have revived a scourge that Chileans thought they had beaten forever: hunger.

So the number of neighborhood soup kitchens has exploded in Santiago, and restaurants - some of them gourmet establishments - have lit up their stoves to whip up meals in solidarity.

In Lo Hermida, a poor area in the east of the capital, nine women have formed a group known as "Las Guerreras" (Woman Warriors) to launch a soup kitchen that delivers 175 meals a day to the virus-stricken barrio's most needy.

"I never thought it would be so necessary here," Ruth Lagos said, adding that she was surprised by the shortages laid bare by the pandemic. Families in the gritty neighborhood that lifted themselves out of poverty have lost jobs and been thrown back on the breadline under the lockdown.

The women organised a supply network of ingredients and then set up a kitchen in the courtyard of a house.

With no experience of cooking professionally, the women found inspiration in the history of the neighborhood, when during the acute economic crisis of the 1980s in the midst of the Augusto Pinochet dictatorship, the community found solace in a similar burst of soup kitchen solidarity.

"We are fighting for a better Chile and the situation is getting worse every day," said Ruth, who at the age of 48, remembers peeling potatoes with her mother as a child for a local soup kitchen.

In the municipality of Penalolen about 80 initiatives of this type have been launched. According to figures from local charities, there are at least 400 soup kitchens active across the Santiago metropolitan region, home to seven million people. Bazan had to close her restaurant for two months before reopening to provide deliveries. She readily joined the "Food for All" initiative.

For many families the meal distributed is the only one of the day.

"We are surviving thanks to the soup kitchen," acknowledged Paola, a women who had just received a plate of chicken with mustard and rice. Unemployed for the past five months, she has yet to receive state aid.

Elsewhere in the capital, restaurants have reopened their kitchens after months of closure to provide meals for the poorest.

This also helps suppliers and drivers, especially school transporters, which have been shut down since schools closed.

"It helps us a lot - and it helps a lot of other people all along the chain," chef Carolina Bazan, owner of the Ambrosia Bistro and named best chef in the 50 Best Restaurants in Latin America ranking.

Bazan, who had to close her restaurant for two months before reopening to provide deliveries, decided to join the "Food for All" initiative, which brings together 14 restaurants and distributes 6,000 meals a week. 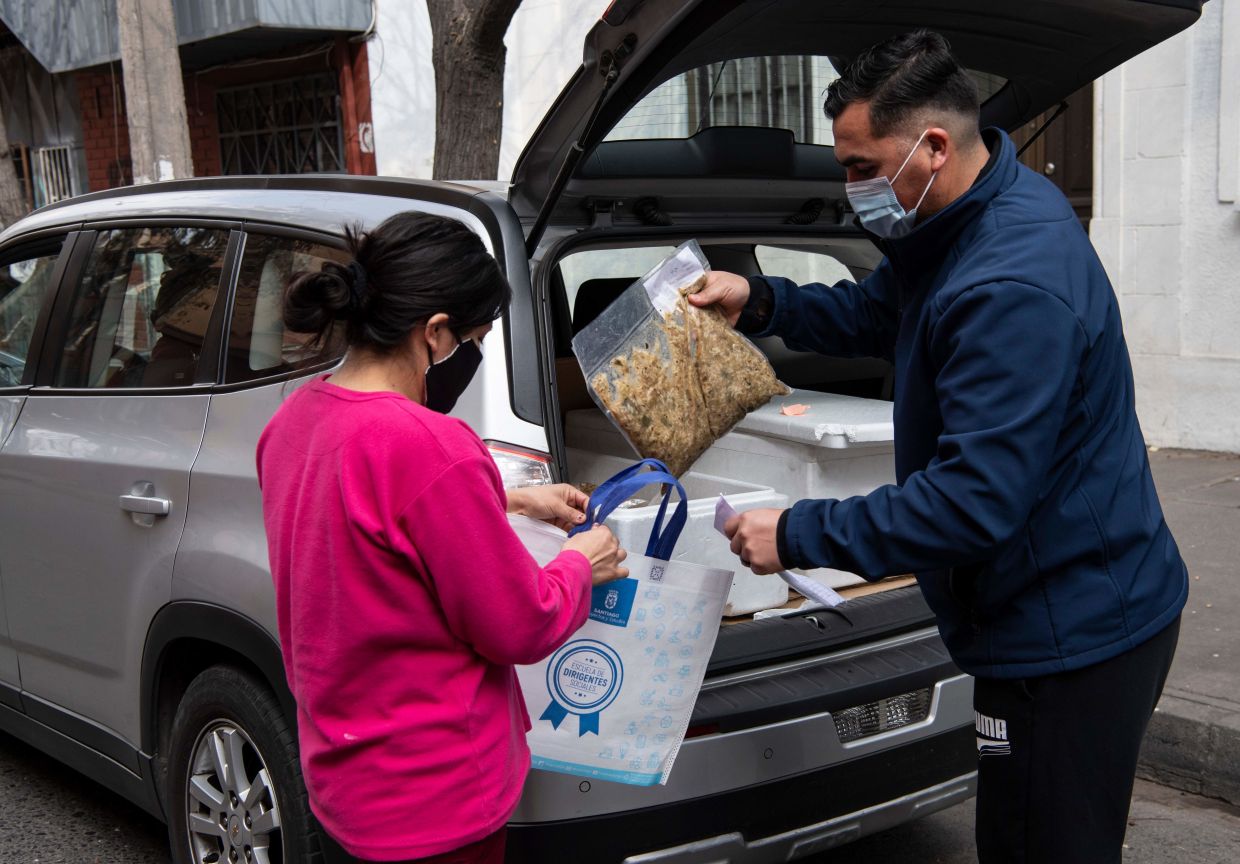 For many families the meal distributed is the only one of the day.

With two assistants, the award-winning gourmet chef prepares 450 dishes a week that are distributed to families in the center of Santiago.

For now, she has put aside the elaborate food preparation that is her stock in trade in her traditional French restaurant, to concentrate on simpler fare.

"The most important thing is that it's home-made, good food that fills your soul and that it's nutritious," said the 39-year-old chef, a mother of two.

"Food for All" is financed by donations that enable the purchase of food, preparation of dishes, and payment of restaurants and delivery companies.

"When we started in the second week of May, there were three soup kitchens. Two weeks later there were 25 and a month later, 78. Hunger is skyrocketing in Chile," said Ana Rivero, one of the people behind the movement.

And Chile is Latin America's wealthiest nation per capita.

To answer needs emerging elsewhere, there are now branches in other cities such as Antofagasta in the north, and Valpariso and Vina del Mar. - AFP