Jacqueline Sauvage, a French woman was pardoned by the French president after killing her abusive husband. Photo: AFP

A Frenchwoman who became a symbol of the struggle against domestic violence after being jailed for killing her abusive husband, then pardoned, has died aged 72.

Jacqueline Sauvage was sentenced to 10 years in prison for murder in 2012, but was freed in December 2016 following a hugely unusual pardon from then-president Francois Hollande.

She had fired three bullets into her husband Norbert Marot's back a day after their son hanged himself in 2012, and her case became a rallying cause for feminists.

Sauvage testified that she had endured 47 years of violence, including sexual assault, at her husband's hands.

Her three daughters testified against their father, saying they too were beaten and raped.

Sauvage's death was confirmed by Sylvie, one of her daughters, said the funeral had taken place last Tuesday.

"Jacqueline Sauvage died a free woman," President Emmanuel Macron wrote on Twitter. "She became a symbol of the struggle against violence inflicted on women."

According to the local daily La Republique du Centre, which first broke the news, she died on July 23 at her home in La Selle-sur-le-Bied in the Loiret department south of Paris, the same village where she killed her husband.

"Jacqueline Sauvage, through her story and case, helped to raise awareness of the existence of women who were battered for years behind closed doors within the family amid the silence of society," she said.

Sauvage's murder verdict was upheld on appeal in 2015 and Hollande granted the pardon the following year. He "considered that Sauvage's place was no longer in prison but with her family," his office said at the time.

The move caused controversy among some in the legal profession, who feared the president had overstepped his authority and undermined the independence of the judiciary.

Feminist groups, celebrities and politicians had rallied behind Sauvage, and a petition gathered nearly 436,000 signatures.

French actress Muriel Robin, who played Sauvage in a hugely successful TV movie in 2018, commented after her death that France did not do enough for battered women.

"We give billions to save the economy of our country but how can we not find a billion to fight domestic violence?" she told Europe 1 Radio.

One woman is killed in France every three days by their partner or ex-partner, while marital violence affects 220,000 Frenchwomen every year, according to government figures released last year. - AFP 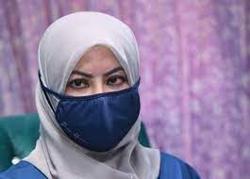