Many aren't able to grieve for a loved one in person because of the pandemic. Photo: Filepic

When Rachel lost her 84-year-old father to leukemia on March 26, she was devastated that she couldn't be at his funeral to perform the last rites for him. She was stuck in Cambodia where she is based and could not fly back home because of the country's movement control order that was enforced on March 18.

Her father, a retired salesman, was diagnosed with acute leukemia (AML) in June last year and for the last nine months or so, Rachel had been flying back to Kuala Lumpur from Phnom Penh (where she is working) every weekend to be with her father.

She'd fly in on Friday and back out on Sunday night or Monday morning, depending on the availability of flights.

"When dad's AML was diagnosed Ihad to make the difficult decision on whether to keep my job in Cambodia or not. However because my sister and brother were in KL to care for him, I decided to keep my job there. I came back every single weekend, though. It was exhausting but those weekend dinners spent with him and my family were something I will cherish forever," shares Rachel.

The last time she saw her dad was on March 16. By the 21st, his condition began to deteriorate but, by then, it was too late for her to return home.

"Never in my life did I think I would not be there to bid him farewell. The hardest part about all of this is that i could not fulfill my duty as a daughter (in performing the funeral rites)," says Rachel who has still not been able to leave Phnom Penh because of the country's lockdown restrictions.

The 49-year-old chief digital and technology officer at a bank in the Cambodian capital had to witness her father’s wake and funeral on zoom and deal with her grief on her own.

“It was all so surreal. At 5.30am that morning, I called my dad and spoke to him. He was barely responding. I went to have a shower and when I came out, I saw messages asking me to call home. I knew it was over. I fumbled for about five minutes with my phone and then I video-called my mum and saw the nurse removing the oxygen tube from my dad. Just like that, he was gone.

“I kept the call going and watched the ambulance arrive, saw the doctor certify his death and only then did I go to work. I didn’t know what else to do, I could not be home, ” says Rachel. The pandemic has upended the way we grieve a loved one. Photo: 123rf.com

The coronavirus pandemic has upended the way we grieve for a loved one who has passed on. Distancing measures to prevent the spread of infection has unfortunately kept many from being with loved ones in their last moments.

In these times, the safety of the family and larger community outweighs a family’s need to mourn in their customary ways.

However, now compounding the pain of loss is that people cannot grieve and process their loss like before.

Visits to grave sites are prohibited for the time being, as are communal prayers with family or the community that are often a way to help the bereaved cope with their loss.

And, in corona times, mourners aren’t encouraged to console each other with a hug or even a comforting touch, which is heart-wrenching.

Funerals too have had to be adapted, in keeping with social distancing protocols.

In the first two months of the MCO, funerals were limited to immediate family only; now under the conditional MCO, up to 20 people are allowed for wakes and funerals as long as Covid-19 SOPs such as social distancing and sanitising are adhered to.

Because houses of worship remain closed, funeral services have had to be modified. 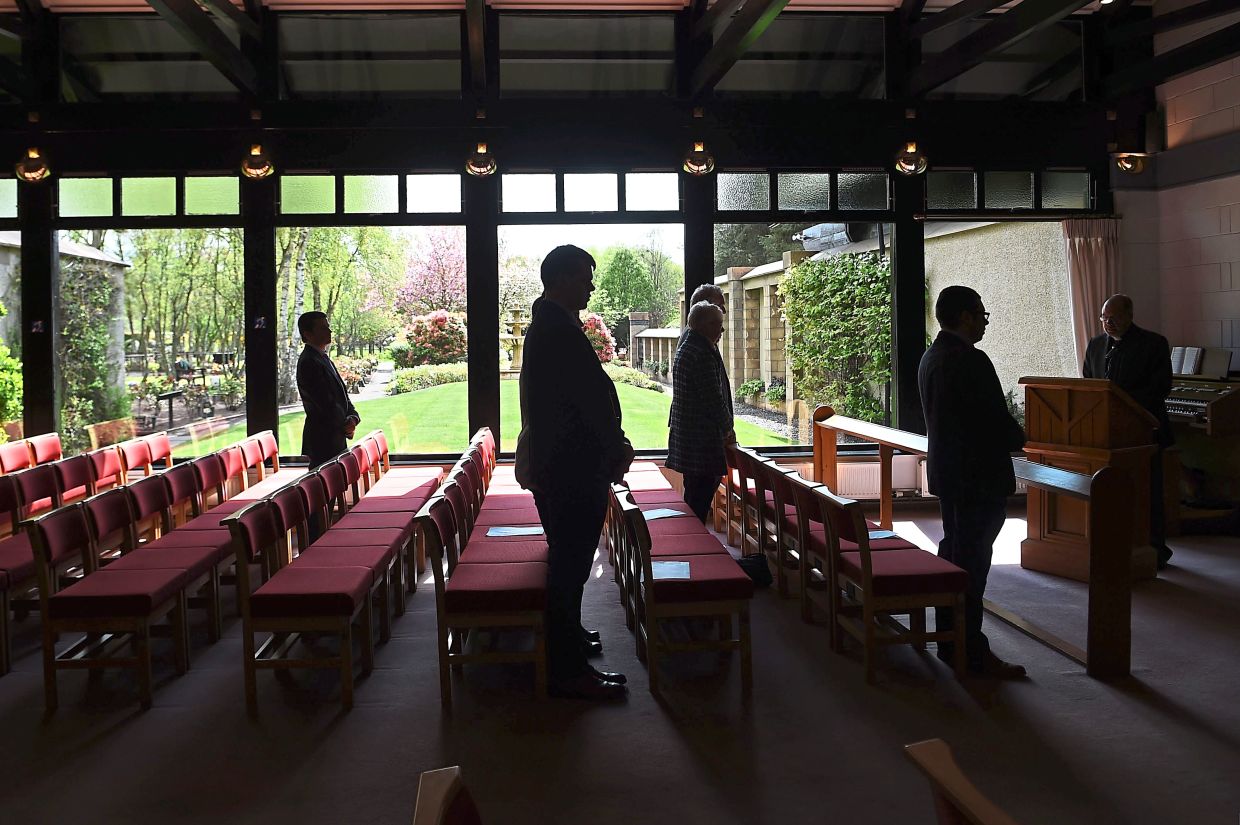 There are new rules for funerals and wakes to safeguard attendees and the larger community from the spread of the virus. Photo: AFP/Andy Buchanan

Even arranging for a burial or cremation has become less personal; what used to involve family and friends playing their parts in the final goodbye is now strictly handled by funeral service providers.

Without the ceremonials of the funeral and the close comfort of loved ones, how are we to grieve?

Divasha Mohan, who works in Singapore, says she had to watch her grandmother’s funeral in Penang on Zoom. The experience was “gut-wrenching for many reasons”.

“Of course I wanted to be there to say goodbye to my patti. She raised me when my parents were at work.

“But it was also very hard not to be there for my mum, not just during the funeral but in the days after.

“To watch my mum sobbing at the funeral without being able to comfort her was hard.

“I felt like I was being a bad daughter. I just wanted to put my arm around her or tell someone else to. But everyone was told to stay apart.

“It was strange seeing everyone standing a metre apart like that. So distant and impersonal. At moments like these, a hug just makes a huge difference, ” says Divasha, 26, a software engineer.

People will find a way

Like so many things about the pandemic, it is unclear how long more funeral practices will have to adhere to measures in place to contain the spread of the virus.

The bereaved, says psychologist Assoc Prof Dr Anasuya Jegathevi Jegathesan, need to find new rituals to cope with death and grief. Customs and rituals, whether it is prayers or practices, are intrinsic to coping with loss and while we may not be able to carry out the rituals that we are familiar with, we need to come up with new ones to help us cope, she says. ‘Closure does not have to be physical. Closure is personal and emotional and will take time. Everyone has to get that closure in their own way, ’ says Dr Anasuya. Photo: Filepic“You literally need to do your own funeral – even if it’s just a prayer at your altar. Some might want to do a more elaborate prayer that mimics what you would have done under normal circumstances, just to have a sense of completion to end your journey with the person.

“You could create a memory book or a journal even. Do something in the name of the person you lost – feed the hungry, give to a charity in the name of your loved one. Offer a eulogy and maybe do it outside, somewhere you both loved going or out in nature. Or, in this age of technology, post something about the person on social media. Do what helps you feel better, ” says Dr Anasuya, who is the director of the psychology programme at Taylors University.

Not being there when a loved one is sick or being unable to visit the person for the last time when they aren’t well is hard. And seeing them via zoom just isn’t the same.

“Closure does not have to be physical. Closure is personal and emotional. Finding closure will take time – there is no set time frame to get over the loss of someone you love – and you have to do it in your own way. People will find different ways of finding this closure, ” says Dr Anasuya.

The bereaved need to come to terms with not seeing the person they love and care about getting a “proper send-off” like before.

“I, too, recently had to attend a funeral of a relative that was streamed. There were the maximum 20 people present at the funeral and the only thing going through my mind was that the deceased deserved more than that. It was very hard to watch a person who has done so much in her life get so little in her death.

“We need to process the grief and guilt of not being there for people who were there for us in times of our need by doing some of these things, ” she says.

While waiting to return home to pay her respects to her late father, Rachel performs a nightly ritual in her home in Phnom Penh. Every night, Rachel lights a candle in memory of her father who passed away on March 26, during the MCO. Photo: Handout“Every night I light a candle to honour my dad. I am better now. I dreamt of him. I was in the hospital, thanking the doctors and nurses who took care of him and he appeared. I told him I missed him and he told me to not be sad anymore and to let him go. That helped me.

“What also got me through this was my family – my mum, who is 79, my siblings and their spouses. Our closeness in caring for my dad and dealing with our loss has helped me cope. And my faith.

“But the first chance I get, I will fly home to see my mum and pay my respects to dad, ” says Rachel.

Getting professional help to deal with grief

Malaysian-born photographer captures lives of people in lockdown in Australia

Addressing harassment during the MCO

Using their art to challenge the patriachy

family , grief , grieving , mourning the death of a loved one , coronavirus , covid-19 , seniors