Alone in the city during the MCO, family ties become valuable

The MCO doesn’t have to be a time of isolation or loneliness for singles or those who are staying alone, but only if they decide to make the most of their time and connect virtually with others Photo: Filepic

Adam Kamaruddin is relieved that the movement control order (MCO) has been relaxed a little.

Since the start of the movement control order (MCO), Adam, 24, has been “home alone” in Kuala Lumpur.

”I know the MCO is important but I really miss my family and friends so I'm glad that the rules have been slightly 'relaxed' in the latest conditional MCO. At least, I can now exercise outdoors, but it is still important to maintain that social distancing, ” he says.

Adam, who comes from Teluk Intan, says that he initially wanted to “balik kampung” to spend the MCO with his parents, but changed his mind in the interest of safety.

“I meet people every day in my work, so I wouldn’t know if I’ve been exposed to the infection since some people don’t even have any symptoms, ” the retail sales executive recalls.

“The last thing I wanted was to unintentionally bring the virus back to my family in my hometown, ” he says.

He admits that it has not easy being “home alone” for the past one and a half months.“I usually hang out with my friends on weekends - at the mamak stalls or playing futsal - and I’m rarely at home, ” Adam says.

“But during the MCO, it is rather “sunyi” (quiet/isolated). All I’ve been doing is eating, sleeping, exercising, watching television, surfing the Internet and playing online games... since my work can’t be done at home, ” he laments. For those who aren't able to work from home during the MCO, they can still make use of their time to learn something new. Photo: Filepic

“Thankfully, there is Whatsapp and all my chatgroups so I can keep in touch with my friends. Or else I would go crazy!” he laughs good-humoredly.

“Every night, I video call my parents and family members in my hometown, ” he says.

For meals, Adam has been ordering delivery, getting take-away food, or preparing simple meals at home.

“I don’t have a full-fledged kitchen where I’m staying so it isn’t convenient to cook elaborate meals, ” he says.

Now that it is the Ramadan month, Adam orders extra food for his iftar (breaking fast) and sahur (pre-dawn meal before starting fast).

He has been exercising daily by climbing stairs, walking around the house compound, and lifting (makeshift) weights.

“I have the whole place to myself since my housemates have all ‘balik kampung’ earlier, ” he says.

The first week of MCO was the most difficult, but after awhile, he has gotten used to the “new normal”.

“This a good time for me to learn new things online by viewing YouTube videos, watching free webinars, as well as reading free online books, ” he says.

For Craig Dickson, 31, a Scottish expatriate who has been living and working in Malaysia for three years, going through the MCO in KL is an “interesting challenge”.

Dickson, who lives alone, admits it can be a trying time.

While work keeps him busy, he says he really misses the social contact with his colleagues and friends.

“Phones and laptops are a blessing, but they can’t replace the feeling you get when you see friends in person, ” he explains.

Dickson’s weekday routine is similar to before the MCO, but with a few differences since he hasn't been able to go out.

“I wake up the same time (at dawn) and have breakfast and coffee on the balcony in the time that it would take me to get ready and go to work, ” he says. 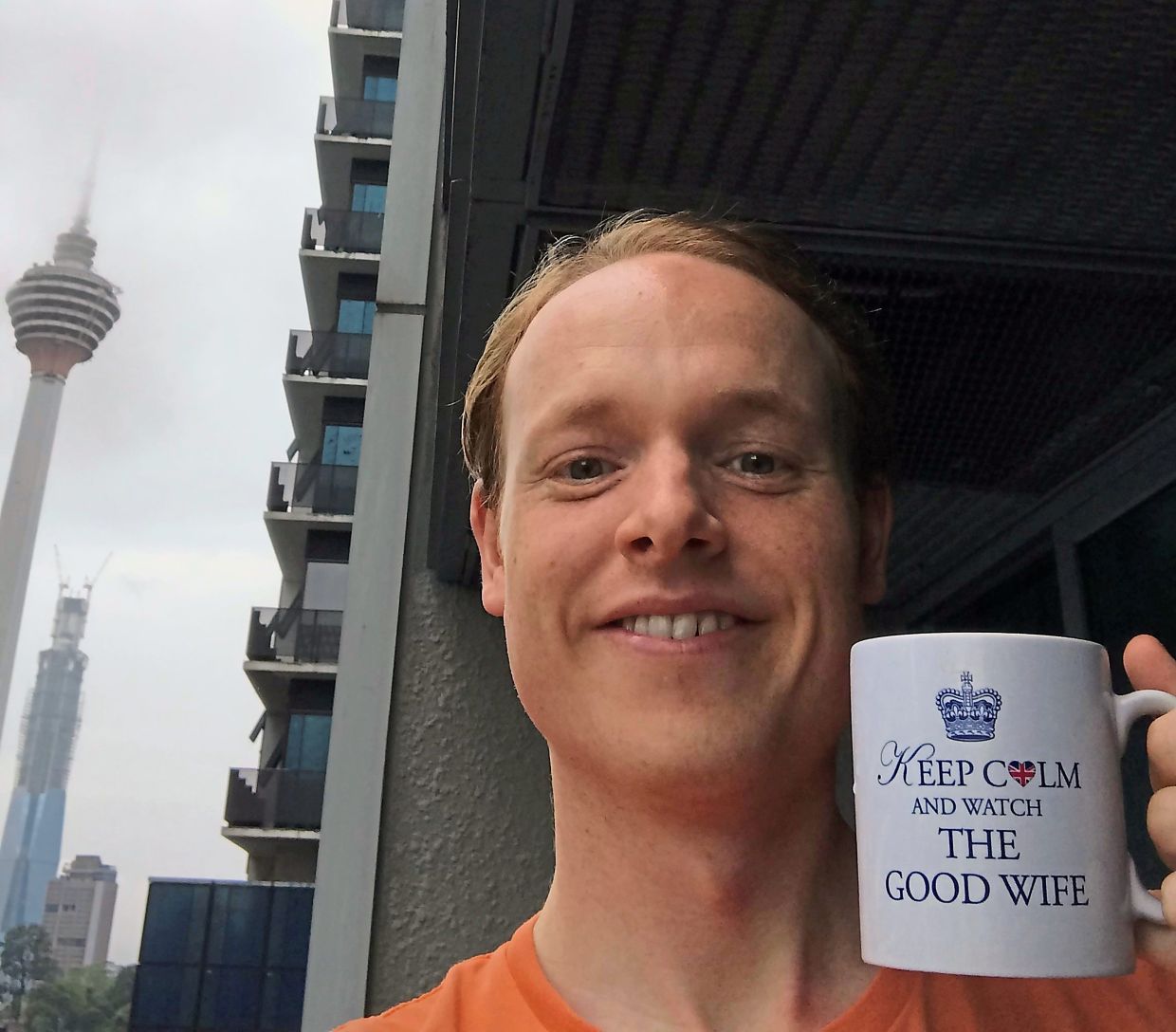 Dickson starts his day with breakfast and coffee on his balcony with a view of Menara Kuala Lumpur. Photo: Craig Dickson

He then starts work, which includes a daily video conference call with his team of 20 to make sure everyone is coping well. It also includes video calls with his other colleagues and clients all over the world.

“Our systems are set up for working from home, but I really miss seeing my colleagues face-to-face.

“It’s also a difficult time for clients who aren’t able to operate during the MCO so I’ve been working with them to try and plan what’s best for the coming months, ” says Dickson who is in accounting.

In the evenings, Dickson exercises following a video instead of his daily run at KLCC Park. He then prepares and eats his own dinner and watches Netflix before turning in for the night.

“During weekends, I have long phone calls with my friends and family back home.

Dickson says that now is a good time to re-connect with his school friends all over the world, as well as friends and family back home, as some of them aren’t working during this time and freer to chat.

“I also have this weekly live, interactive Arm’s Length pub quiz with my high-school friends, ” he said. “It is the most sociable part of my week!” he exclaims.

He admits he really misses his weekend hikes and dinner events, midweek Rotary Club meetings, and pub quiz team (who usually meet in person before the MCO).

“Although I’ve been keeping in touch with friends from these groups but it’s not the same as being able to physically meet up, ” Dickson says.

“Video conferencing works well for organised meetings but casual chats are tough as everyone ends up talking over one another if the group is big!” he says. “But it does help to tie one over until the situation is better so I'm glad that some leeway has been given in the latest conditional MCO. I can finally go jogging outdoors and get some much needed Vitamin D! ” he adds.

To Caryn Fan, 40, a HR software specialist based in Petaling Jaya, surviving the MCO, although not easy, has not been as difficult as she expected.

Fan, who is single, says she is even busier now than before the MCO. But that is because she has made it a point to make the most of her time and keep herself busy.

“This is important, especially if you’re single or living by yourself, ” she says. Fan believes in keeping busy and making the most of her time during the extended MCO. Photo: Caryn FanFan starts her day early at 8.30am with a cup of coffee, while checking her work email.

“By 9am, my clients will start calling for their systems support or other matters, ” she says.

Before the MCO, Fan used to prepare her meals three days at a time and freeze them.

“I didn’t have time to prepare every meal from scratch before, ” she said. “But now, I can cook my lunch and dinner daily because I’m at home all the time, which is kind of nice because I get fresh home-cooked food every day, ” she says.

Thrice a week, Fan would do an online “bootcamp” workout, and once a week, she would attend a business-networking meeting that starts at 6.30am!

She also connects with her family and friends through video calls and has online karaoke sessions with them.

With so many activities and such a positive attitude, it’s no surprise that she hasn't felt any sense of isolation.

“Perhaps I don’t feel that sense of isolation because I understand the need for this social distancing. In fact, all the current technologies available – video calls, online games, online learning – have brought the world closer to me, ” she says.

“When you focus outwards, rather than inwards, you won’t feel so isolated, ” she adds.

“Now is the time to reconnect with your family members and friends whom you haven’t contacted or spoken to in a long while, ” Fan says.

“Text them, arrange a video call or maybe even schedule after the MCO is lifted and the pandemic situation has completely recovered, ” she advises.

“It’s also a good time to connect ‘virtually’ with people around you, especially others who are also home alone and might need encouragement. More freedom is given in the latest controlled MCO but it is wise to proceed with caution and still maintain that social distancing for now since the virus is still out there, ” she concludes.

A parenting portal for parents, by parents

Blue skies, less waste: Covid-19 and the MCO's effects on the environment