By SHEELA CHANDRAN and ELIM POON

Wong counsels and educates other senior citizens with cancer, and spends time doing things he enjoys with his wife Chen. - ART CHEN/The Star

Retiree Wong Kuan Sing, 74, is in high spirits after a recent holiday in Hunan, China. Over hot coffee and snacks, he shares memorable stories of his trip, which included a visit to Zhangjiajie National Park, and Yangtze River cruise.

There was a time when Wong didn't think he’d live to take in breathtaking sights, what more the view of the spectacular Chinese national park, known for its breathtaking sandstone pinnacles that was the site of Hallelujah Mountains in James Cameron’s sci-fi film, Avatar.

In 2010, Wong was diagnosed with Stage Three prostate cancer. The news came as a shock, and the father of three thought he was near death.

“I felt very sad. The first person I thought about was my wife and how I would be leaving her alone. I had difficulty sleeping because I was so worried thinking about death, ” shares Wong, who found out he had cancer during a routine medical check-up. Cancer survivor Wong and his wife, Chen Ooi Khoon, on a recent holiday at Zhangjiajie National Park in Hunan, China.

He was in his 60s then, and was worried about battling cancer at that age. Wong was keen to undergo surgery, but doctors advised him to go for radiotherapy instead.

“Elderly patients are given less invasive treatment, and my doctor recommended radiotherapy, which he assured me is just as effective. The doctors had reservations about surgery since the cancer was advanced and could have spread., ” explains Wong, who underwent 37 cycles of radiotherapy to kill the cancer cells.

This is the ninth year that Wong has been cancer-free. Wong says death is not necessarily the end result of cancer, even when diagnosed at an older age.

“Being diagnosed with cancer was worrying. But elderly patients with any illness should never give up. Seek help from medical professionals. Having a positive mindset also helps me battle against cancer, ” says the grandfather of seven, who also underwent hormone therapy for three years to shrink a tumor.

Cancer can occur at any age but it is more common in the elderly, says Universiti Malaya Medical Centre’s consultant geriatrician Prof Dr Tan Maw Pin. Lung cancer, bowel cancer, breast cancer, and prostate cancer are the most common forms of cancer in older persons.

But cancer is often diagnosed too late among senior citizens, she adds. Having a positive mindset is crucial when a patient is undergoing treatment for cancer. - 123rf.com

“Often, the cancer is discovered by accident when X-rays or scans are carried out to examine other conditions. This could be due to lack of awareness.”

Prof Tan adds cancer in the elderly often exhibits a different set of complications as compared with cancer affecting younger persons. This is because the elderly may already be suffering from other medical conditions.

“Cancer in the elderly behaves differently. It could be slow-growing, or the older person may already suffer from other medical conditions such as heart or kidney problems which are more likely to limit their lifespan, even more than cancer itself. Overall, if you have diabetes or high blood pressure, these conditions and the medications you take for them might make it more tricky to treat cancer.”

She adds treatment options include curbing the cancer growth surgically, or with chemotherapy or radiotherapy.

“Sometimes cancer treatment aren’t suitable because the cancer is too advanced or the patient has other disabling medical conditions. But there are many ways to make them feel better. Simple measures like rehabilitation, blood transfusions, and pain management can help.” Going for regular check-ups is important as many senior citizens detect their cancer late, which complicates their chance of recovery. - 123rf.com

Due to age and frailty, operating on elderly patients with cancer can be tricky. UMMC’s head of colorectal unit Prof Khong Tak Loon says it is important to determine if a patient can be cured by surgery and undergo the radicality of the operation.

“Surgery inflicts trauma to tissues and will induce a stress response from the body. Several signs we can detect when the body undergoes stress is increased heart rate, blood pressure and respiratory rate.

“Individuals who are frail generally have reduced capacity to withstand such stressors. When the body’s vital organs are pushed to the limit, they could ultimately fail.”

Prof Khong adds that the success of surgeries is primarily related to the body’s ability to cope and weather through surgical stress, particularly if there are complications during surgery.

“The key is not to discriminate against patients based on age alone. There are individuals past the age of 80 who are still running marathons. Conversely, there are patients in their 50s who have developed multiple degenerative conditions. Surgery is performed with the intention to cure, alleviate pain or intolerable symptoms to improve their quality of life.”

Treating cancer can prolong a patient's life and improve their quality of life, but there are other non-medical issues that are obstacles to the elderly seeking a cure.

The government heavily subsidises public healthcare treatments (including cancer) and at times, it is free. But due to the high demand for such services, there’s a long waiting line for many patients seeking cancer treatment.

Many patients with cancer want fast treatment and often turn to private hospitals for quicker treatments. But it comes with a high price. Sometimes, it can run into hundreds of thousand ringgit and many retirees do not have the means to finance their treatment. Many have stopped working and have no income, health insurance or medical coverage. Some worry about dipping into their retirement fund to pay for the mounting cost of treatment and care. Prof Dr Tan says prevalence of cancer is higher among the elderly.

According to Prof Tan, it is common for those with cancer to be in financial difficulties.

“At times, treatment may cost hundreds of thousands of ringgit. Older patients' adult children may end up selling their houses and borrowing money. So, elderly patients may conceal their cancer fearful of financially burdening their children, or decline treatment.”

Wong, a former chief operations officer in a private company, counts his blessings that he had sufficient savings and insurance policies to pay for his one and a half month radiotherapy treatment at the Royal Marsden Hospital, a specialist cancer treatment centre in London.

But not all senior citizens are as lucky as Wong. A large number of pensioners do not have enough in their retirement nest egg to pay for unexpected catastrophic illnesses.

Despite the high costs of treatment, Wong urges patients to not give up and seek help instead.

“Elderly patients should make use of medical services available in government clinics. It is equally important for cancer patients to join support groups. Organisers in support groups can help patients obtain cheaper drugs, as they know who and where to refer the patients to, ” says Wong, who is president of Together Against Cancer Association Malaysia.

Wong, who is also acting president of Prostate Cancer Society of Malaysia (PCSM), spends a fair bit of his time educating patients on cancer and advocating for cheaper drugs.

He also attends conferences on cancer all over Malaysia.

"It is important for cancer patients to join a support group, not only for moral support but also for information. In PCSM, all the members are well-informed on the most up-to-date cancer treatments. We even have a Whatsapp group (Prostate Champions) to share information," says Wong who swims and does qigong daily. He is particular about his diet too, sticking mainly to white meat and vegetables.
Wong and his wife, Chen Ooi Khoon, 71, will be attending their grandchildren’s graduation at the end of the month. They will spend Christmas in Harbin, China. Also in the pipeline is a trip to England to visit their daughter, Dr Wong Min Yen, and son, Dr James Wong.

Though Wong’s cancer was detected late, he still managed to undergo treatment that has saved his life. “I’d encourage senior citizens to undergo regular medical checkups. As they say, prevention is better than cure.” 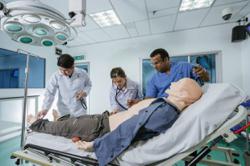