Malaysian women are pinning their hopes on Dr Wan Azizah

Because women have been left out of decision-making in relation to Muslim family laws, they continue to face institutional inequalities in terms of their rights to divorce and maintenance, says Juana. Photos: filepic Read more at https://www.star2.com/?p=390929#BAJohQOP4ZyjDGim.99collaboration with local TV show 3R. CHAN TAK KONG/The Star

Barely a day after the announcement of GE14’s results, an online petition to the newly elected Prime Minister began circulating, demanding that the ruling party make good on its promise to increase women’s participation in the government.

The petition called for the Prime Minister to have at least 30% representation of women in his Cabinet. Within days, it had garnered 6,000 signatures and was submitted to Pakatan Harapan secretary-general, Datuk Saifuddin Abdullah as well as its Wanita chief, Zuraida Kamaruddin.

The petition was initiated by a handful of women citizens who want to see change in the way the government addresses their views and concerns.

“Since (Tun Dr) Fatimah Hashim was appointed as the first woman minister 49 years ago, we have not had more than three women appointed as full ministers in any administration,” says Juana Jaafar, one of seven women who wrote the petition.

“This has had major negative implications for Malaysia where women are often left out of decision-making in various sectors. For example, women have for too long been left out of decision-making in relation to Muslim family laws. As a result, Muslim women continue to face institutional inequalities in terms of their rights to divorce and maintenance.”

Because women have been left out of decision-making, they continue to face institutional inequalities, says Juana. Photo: Filepic

The new government is slowly taking shape, and women want their voices heard and counted in its formation.

Newly appointed Women and Family Development Minister Datuk Seri Wan Azizah Wan Ismail has not been sworn in, but there is already a long line of women eager to meet with her or who have said they hope she will fight for them.

“Too many administrations have come and gone without realising this promise to women in Malaysia,” says Kee, an activist and researcher with the Association for Progressive Communications. “The call for a minimum of 30% women ministers is important because the formation of cabinet is happening right now.”

The petition was accompanied by a list of all 20 Pakatan Harapan elected women parliamentarians, along with their academic qualifications.

“This is to dispel any notion that women candidates were less qualified than their male counterparts,” says Thilaga. “Unfortunately, we are all too familiar with the stereotypes, bias and resistance against women’s representation and leadership in all spaces. Women are perceived as being lesser than and inferior.

“We have also seen this when this letter went public ... people argued that (cabinet) appointments should be made based on merit. This argument is inherently sexist as it assumes that women aren’t capable and qualified. Women have to prove themselves as being qualified and are constantly placed under scrutiny to access things or opportunities.”

Kee adds: “The list itself isn’t exhaustive but it shows that Pakatan Harapan has enough candidates to meet the minimum 30% quota on merit.”

They point out that the question of merit is not relevant because this time around, many male parliamentarians have also no ministerial experience.

“It does not make them (men) any less qualified either. But with women elected representatives, this bias works against them,” says Kuga Thas. “And it has, time and again in the past, resulted in the gender wage gap in the private sector. This is another area Pakatan Harapan has promised to look into.

“Yes, we know that there are many women in civil service, but how many of them are director-generals or secretary-generals?”

The National Council of Women’s Organisations (NCWO) and the Joint Action Group for Gender Equality (JAG) also sent letters to Dr Wan Azizah on the matter.

NCWO’s secretary-general Omna Sreeni-Ong says, “We are calling for at least 30% women in the cabinet and in all decision making committees – at the federal, state, and local levels. Malaysia is a signatory to the United Nations’ Cedaw (Convention on the Elimination of Discrimination against Women) and such a decision would be in compliance with the Convention,”

Malaysian women are pinning their hopes on Dr Wan Azizah 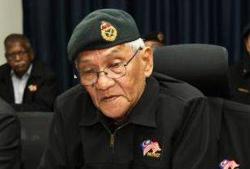 Pandemic inflames violence against women
Merkel urges German citizens to intervene on behalf of women facing violence
Parties only among family members, except for the Trumps
Sole female candidate for Burkina Faso presidency says education key to progress
Girls storm the boxing ring in Gaza gym
The birthday conundrum: should siblings get consolation presents?
Starchild: Malaysian children get creative with their drawings on candles
Barriers to online learning
Are children spending too much time online?
Malaysian youth take a stand on climate change