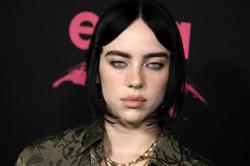 The Canadian actor shared a post of the two of them in Christmas sweaters on Instagram last Saturday. Photo: Simu Liu/Instagram

The Canadian actor shared a post of the two of them in Christmas sweaters on Instagram last Saturday.

The snap was taken at a red carpet event last week in Los Angeles for the movie premiere of Violent Night, a Christmas movie starring David Harbour as Santa Claus.

In the caption, Liu, 33, wrote: “Pictured: two Asians in front of Santa’s crotch.”

Hsu, who works at Interscope Records, posted a couple shot of them cuddling on Nov 21 with just a smiley emoticon in the caption.

She was on Forbes magazine’s 30 Under 30 for North America, a list of industry figures under the age of 30, in 2021 and had worked on the digital and social campaigns for musicians such as Lady Gaga and Billie Eilish.

Liu, who was the breakout star of superhero movie Shang-Chi And The Legend Of The Ten Rings (2021), was dating actress Jade Bender earlier this year. They attended a number of red carpet events together, but had broken up by September.

Within 21 hours of sharing the couple photo, the post had close to 240,000 “likes” and the comment section was filled with equal parts well wishes and joking jealous comments.

Actress Olivia Munn commented: “Cuuuuuute” with heart emojis, while one fan wrote: “Simu... Is this who I have to fight?” – The Straits Times/Asia News Network