Yoon Hong-bin was at Itaewon with his girlfriend on Oct 29. Photo: Yoon Hong-bin/Instagram

South Korean actor Yoon Hong-bin took to Instagram to share his account on what happened at Itaewon on Oct 29 as he and his girlfriend were in the district on the tragic night.

In a now-deleted post, Yoon said he and his girlfriend were at a bar when the tragedy occurred.

“I went outside to smoke, and I saw people getting carried down [the street]. More and more people were being carried out, and because they couldn’t carry them in ambulances anymore, they began putting people down in the alley and conducting CPR,” the actor wrote, as reported by Korean media.

The 28-year-old, who starred in films such as Time Renegades and I Order You, then sprung into action and helped out.

"For over 20 minutes, I performed CPR on the victims," he said, adding that his girlfriend massaged their arms and legs.

"We tried mouth-to-mouth resuscitation. We were crying and praying for the victims to regain consciousness and dozens of people were performing CPR on the victims in the alley.

"You could hear all of us begging for them to open their eyes. From what I know, only one victim from the alley where I was eventually regained consciousness. I was not able to save the person I was helping either," he said.

The actor added that the tragedy could've been prevented if the police were on the streets instead of at the roadside.

"I know the police also had a hard time and did their best, but I think the police were deployed to the wrong places and that failed to prevent the disaster," he said.

On Saturday, party-goers had crowded into narrow streets of the Itaewon district for Halloween festivities. Chaos ensued when scores of revellers headed into one particularly narrow alley, which was already jam-packed.

Reuters reported that the death toll had risen to 154, with 149 injured, 33 of them in serious condition. 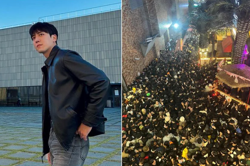