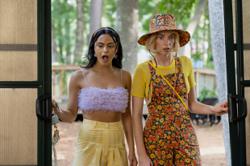 Things have been looking up for American singer-songwriter and actress, Maya Hawke, who recently returned as a singer with her latest studio album, Moss.

The album which was released on Sept 23, was announced alongside the release of the first single Thérèse during her appearance on The Tonight Show with Jimmy Fallon.

The eldest of two children, Hawke was born on July 8, 1998, to actors Ethan Hawke and Uma Thurman, who met on the filming set of Gattaca. However, the couple split when Hawke was only 5 years old. Following in her mother’s footsteps, Hawke began her career as a model for Vogue.

Eventually, Hawke transitioned to acting by making her screen debut in the 2017 BBC adaptation of Little Women, as Jo March.

Hawke got her big breakthrough for her role as Robin Buckley in the third season of the critically acclaimed TV series, Strangers Things.

Since then, the actress has starred in a number of well-known films including Quentin Tarantino’s Once Upon a Time in Hollywood, Gia Coppola’s Mainstream and Leigh Janiak’s Fear Street Part One: 1994.

She recently starred in the latest Netflix film Do Revenge as Eleanor Levetan, alongside Camila Mendes.

The New York City-born actress has also been signed up for many major films including Wes Anderson’s upcoming film Asteroid City as well as Maestro helmed by Bradley Cooper.

Lately, Hawke has been the talk of the town, not only as an arising and promising new presence in Hollywood, but also for her anticipated musical return with Moss.

“It’s a heart-bursting, habit-breaking deep breath - for me at least. Making it felt like an emergency scavenger hunt of some kind. It’s sadder than I remember it”, says Hawke in a press release announcing the new album.

The 24-year-old made her debut as a singer with her 2020 album, Blush, which met with positive reviews from the critics.

According to her, Moss is "an attempt to organise a variety of feelings into some kind of style”.

“Making it changed my life, both in the way it taught me to know myself and the people it brought deep into my heart that I will never let go of," she said.

Moss consists of 13 tracks with all of them written by Hawke herself in collaboration with Lazar Davis, Christian Lee Hutson and Will Graefe. The album was also produced by Hawke and Lazar Davis, and mixed by the Grammy award-winning engineer Jonathan Low at Long Pond Studios.

Actress Millie Bobby Brown on being sexualised at a young age: ‘It’s gross and it’s true’