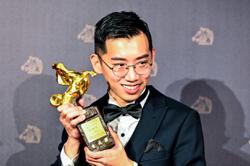 Anthony Wong (left) and Sahal Zaman star in 'The Sunny Side Of The Street'. Photo: Handout

The Sunny Side Of The Street, the debut feature by Hong Kong-based, Malaysian director Lau Kok Rui, has bagged six nominations at this year’s Golden Horse Awards, dubbed the Chinese Oscars.

Starring famous Hong Kong actor Anthony Wong – who received a Best Leading Actor nod for the role – the film centres on a friendship between a taxi driver and a 10-year-old Pakistani refugee boy as the former helps the youngster flee the city.

Besides Wong's nomination, The Sunny Side Of The Street is also competing in the Best Narrative Feature, Best New Director, Best New Performer, Best Cinematography and Best Original Screenplay categories.

Lau not only directed the film, but also wrote the screenplay. In an interview, he said the story is inspired by his own distant relationship with his father and having felt alone in a foreign land.

It's reported the director-scriptwriter left Malaysia some 14 years ago to Hong Kong to further his education. He was 18 years old then.

The Golden Horse Awards nominations were announced on Tuesday (Sept 27) and the awards ceremony will take place in Taipei, Taiwan, on Nov 19.

All the nominated films will be screened during the Golden Horse Film Festival, happening from Nov 2-20. 'The Sunny Side Of The Street' is the debut feature by Hong Kong-based, Malaysian director Lau Kok Rui. Photo: Golden Horse Film Academy