Taiwanese singer Jimmy Lin looks to be on the mend after he suffered injuries to his face and body after a traffic accident 26 days ago.

On Tuesday (Aug 16) morning, his wife Kelly Chen posted on Instagram Stories a photo of a hand – likely to be hers – holding another hand with a plaster on it, believed to be Lin's.

The former model-actress wrote in Chinese: "We will see a ray of light eventually after braving the rainstorm."

Another person was seen partially in the photo. Taiwanese media reckoned it is the couple's eldest son Kimi, who turns 13 in September.

Lin, 47, was driving a white Tesla Model X in Taiwan's Taoyuan city on July 22 when the car reportedly hit the road divider and caught fire.

He and Jenson were pulled out of the car by nearby workers and other bystanders before the vehicle burst into flames.

Lin was warded in the intensive care unit of Linkou Chang Gung Memorial Hospital in Taoyuan after the accident.

He reportedly went through two operations: one to affix a titanium rod to his arm and another for his facial fractures.

He was moved to a normal ward on Aug 1, according to his younger brother Lin Chih-hsin.

A former teen heart-throb who burst onto the scene in 1992, Jimmy Lin is known for songs such as Not Every Love Song Has Fond Memories, Why Am I Always Hurt and Thinking Of You.

Passionate about car racing, he had another accident in 1998 which left him with three fractured bones in his right foot. – The Straits Times/Asia News Network

Jimmy Lin on the road to recovery after fiery car crash 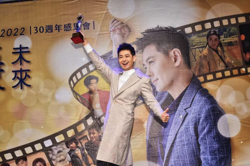