Bowie Wu attributed his good health to walking, a habit he picked up at 21. Photo: Filepic

Bowie Wu, a familiar face in Hong Kong dramas, might have turned 90 in January but hardly looks his age.

In a recent appearance on a Hong Kong television show, the actor attributed his good health to walking, a habit he picked up at 21.

He said it began when he saw a middle-aged man walking with the help of a nurse. Several months later, he saw the same man walking again but unassisted this time.

When approached, the man said that his secret had been to make a habit out of walking - a lifestyle choice that Wu then adopted.

"I walk every day and do calisthenics. I walk for at least an hour or two a day. Sometimes I sing as I walk, shake my hands and legs, and often move my body and walk to promote blood circulation," said Wu.

Wu, who started his acting career in the 1950s, has appeared in numerous Hong Kong movies including playing a police superintendent in The Haunted Cop Shop (1987), alongside Jacky Cheung and the late Ricky Hui.

He was one of the four hosts of travel programme Four Amigos Bon Voyage (2015), along with Patrick Tse, Joe Junior and the late Kenneth Tsang.

Wu, who appears on the new TVB drama Falling In Love With You In Childhood, added that he makes sure to walk even when he is on set or at home.

He also keeps his diet simple and free from supplements or fried food.

"I mostly eat light meals at home, usually a plate of melon, a plate of vegetables, or steamed chicken or lean meat. There must be less oil and less salt. Every morning when I get up, I must drink a cup of warm water to clear my stomach, and I will also drink more soup," he said. – The Straits Times/Asia News Network 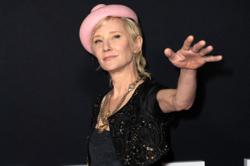