Everyone's favourite friends from under the sea at Bikini Bottom is going K-pop!

It marks the first time the SpongeBob brand is doing an IP licensing collaboration with a K-pop artiste, and the first time Kang is partnering with an animated character.

“We are thrilled to announce this collaboration with Kang Daniel, who himself is a fan of SpongeBob and the Bikini Bottom crew,"

"Like SpongeBob, Kang Daniel is hugely popular and much loved around the world. We are sure that this collection is set to make a big splash and fans of both Kang Daniel and SpongeBob will love what we have in store for them."

The collection includes pen, pouch, tote bag, airpods pro case, mousepad, among others, and they highlight the 25-year-old singer's personality, facial expression, hairstyle as well as his outfit reflecting the fun outlook of SpongeBob we all know and love.

Kang first gained fame in 2017 after appearing on the second season of the TV show Produce 101. Through the show, he was then put in the group Wanna One. After the group disbanded, Kang embarked on a solo career. He has released several EPs and also ventured into acting. Kang released his first full studio album, The Story, last month.

Fans can purchase the special edition SpongeBob x Kang Daniel merch for a limited time from June 24 to June 30 from konnectent.shop/. 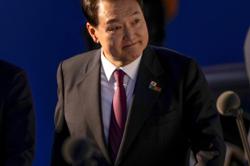