US actress Amber Heard was found by a jury to be liable for defamation. Photo: AFP

The Depp v. Heard trial might be over but the attention surrounding it is not.

An eBay seller, who identifies themself as gibeachhead, is selling a blue wristband with a starting bid of $4,999 (RM21,950).

The item was, according to the seller, used to gain entry to the 20th day of the six-week defamation trial of Johnny Depp vs. ex-wife Amber Heard, held in Fairfax County, Virginia.

“This was the first day of the final week of the trial, and one of the busiest days. I was there and you are obtaining this from a verified first person source,” they said, referencing May 23. “This is a piece of celebrity culture history.”

The seller noted that day “was also one of the longer days of court,” running from 9am to 5.30pm.

Depp, 58, sued Heard, 36, for US$50mil in relation to a 2018 Washington Post op-Ed in which she referred to herself as a “public figure representing domestic abuse,” which – while it did not mention the Pirates Of The Caribbean star by name, he said negatively affected his career. Heard countersued for US$100mil.

Heard last week was found by a jury to be liable for defamation, owing her ex-husband – to whom she was married for 15 months – $15 million in damages. Two million dollars were awarded to Heard for her countersuit. – New York Daily News/Tribune News Service 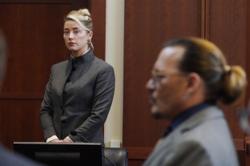