BTS V’s song 'Christmas Tree' to be released Dec 24, listen to a snippet BTS member V has a new solo song coming out, and it arrives just in time for Christmas.

The song, which will be released on Dec 24, is titled Christmas Tree.

It is one of the tracks featured in the soundtrack for the ongoing K-drama Our Beloved Summer, which stars Choi Woo-shik – a close friend of the singer.

A 20-second teaser was released showcasing the drama’s lead actors Choi and Kim Da-mi in a scene.

A previous report stated Christmas Tree will play an important part in the development of the drama's storyline.

In the clip’s final seconds, V’s voice can be heard singing: “I’ll wait for you”.

This isn’t the first time that the 25-year-old performer is lending his talent on a soundtrack of a K-drama starring one of his pals, fondly known as Wooga Squad.

Last year, he sang the track Sweet Night for the series Itaewon Class which was led by actor Park Seo-joon.

‘I do not want my grandchildren to be in showbiz’, says Fauziah Nawi 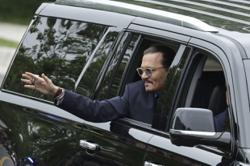