Get an insight into how the acclaimed musician came up with the songs and music that is so integral to Disney's latest animated feature, 'Encanto'.

Lin-Manuel Miranda has been on a roll this year. The 41-year-old playwright/musician/director/actor has been involved heavily in four projects that were released in 2021, in different capacities, including writing the original songs for Encanto, Disney's landmark 60th animated feature.

Before this, there was the feature film adaptation of his musical Into The Heights, animated feature Vivo, and his directorial debut, Tick Tick... Boom, a musical biopic based on Jonathan Larson’s stage production of the same name.

According to him, however, Encanto was the closest to home for him, because it's all about family.

Set in Colombia, the film revolves around the members of the Madrigal family, who live in a magical house and have special powers bestowed upon them by a magical candle that was gifted to family matriarch Abuela Alma Madrigal (voiced by María Cecilia Botero).

There are 12 members of the family in total including the super strong Luisa (Jessica Darrow), flower-controlling Isabela (Diane Guerrero), Dolores (Adassa), who has super hearing, Julieta (Angie Cepeda), whose cooking has healing powers, and so on.

However, the star of the movie happens to be the only one without powers – Mirabel (Stephanie Beatriz), and the story follows her as she discovers cracks in the magic and family home and sets out to find the source of the disturbance, while trying to find a way to fit in within her own family.

Miranda said that because there are so many characters, it allowed for infinite musical variety on his part.

"I get to explore the musical language and culture of Colombia as a student, and then as a practitioner, and then bring as many different styles to these different characters as possible was a really exciting challenge.”

Speaking to Miranda during a roundtable interview with other Asian Pacific journalists, it was fascinating to get an insight into how he came up with the songs and music that is so integral to the movie, while contributing to the story as well. Here is what he had to say about some of the songs in the movie.

During a separate interview with the film’s directors Byron Howard and Jared Bush, they mentioned that it was rare for a songwriter to be involved in a movie from the start, and that Miranda played a big part in coming up with the story, especially at the very beginning, where we are introduced to all 12 members of the Madrigal family via a song titled The Family Madrigal.

“I raised my hand and said, ‘We have to use music to explain who everyone is, how they're related, and what their powers are,” Miranda recalled.

“We needed that cheat sheet on the board early so that we could keep track of who was related to who, so the song was written before we had a second or third act. I wrote that knowing that I would be revising it the entire time we were making the movie, as their powers would change, their names would change, the generations would change, and so on.”

For this song, Miranda was inspired by Belle, the opening number of Beauty And The Beast.

“That song starts so small (sings) ‘Little town, it's a quiet village’... and by the end, you know everyone in the town, from the lady who needs six eggs to the baker with this trade, like always! “Then, you understand the world you’re in, and am ready to go. I was aiming for that with that opening number.”

ALSO READ: Disney's 'Encanto' is about how 'complicated and crazy' large families can be

We Don't Talk About Bruno

Almost the entire production of Encanto happened during the lockdown, but that wasn’t Miranda’s biggest challenge while working on the film.

“For me, I was most excited about having 12 major characters, exploring ways in which every character gets to be as fully developed as possible, and finding the places where music could help with that,” he said.

He gave the example of a song titled We Don't Talk About Bruno, which he says is different from any song ever heard in a Disney film.

“It's the ‘group gossip’ number, and it allowed me to find the musical voices of characters that wouldn't necessarily get their own song in any other Disney film,” he explained.

“We hear from this cousin, we hear from Abuela for a second... and that was really thrilling. I felt like I was writing the end of Act One of a musical.

“I was inspired by songs like A Weekend In The Country from A Little Night Music, and It's Beginning To Snow from Rent. you know, those great moments where everyone's on their way to somewhere, and then we smash all the themes together. So that was a really exciting challenge, to deliver a fully dimensional multi-generational family to the screen.”

Waiting On A Miracle

While preparing for the film, Miranda and the Encanto team took a research trip to Colombia, which he says really fueled a lot of the inspiration for the film,

“The most magical thing was any time we leaned into the specifics of Colombian music it unlocked story for me,” he said, giving an example of the song Waiting On A Miracle, which he says is the big ‘I want’ song of the film.

“There's always the one Disney song where the hero or heroine sings about what they want before they embark on their journey,” he explained. “I procrastinated the most on this one because Disney is so good at them. How Far I'll Go (from Moana) took me a long time too, because (Frozen’s) Let It Go was looming large in my imagination!"

For Waiting On A Miracle, Miranda went back to what he learnt on his research trip, and discovered a genre of Colombian music called Bambuco, which he says is like a Colombian version of the waltz.

“It's in 3/4 time, which is really rare for a Disney song, but it made sense because Mirabel is literally rhythmically out of step with the rest of her family,” he recalled. “Once I leaned into the cultural specificity (of the music), the song wrote itself, as if by magic. 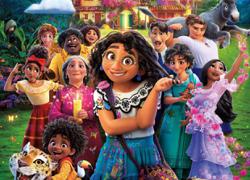 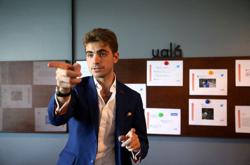