Sci-fil flick 'Seobok' will have you at the edge of your seat. Photo: Handout

The Korean Film Festival returns to Malaysia from Dec 2 to 5, offering the public the chance to catch three movies for free – Minari, Seobok and The Hypnosis – at Golden Screen Cinemas (GSC) Mid Valley in Kuala Lumpur.

“Minari is a movie that has received attention from audiences around the world and has been recognised for its great acting performances,” says Lee Chi Beom, ambassador of the Republic of Korea in Malaysia.

The 2020 film, which follows a Korean-American family as they relocate to an Arkansas farm in search of the American Dream, was nominated for six Oscars and won an Academy Award out of six nominations last April.

It drew over a million viewers in Korea.

If the horror genre is more your cup of tea, go on a thrill ride with The Hypnosis where an unassuming English major delves into a world he never knew existed.

Then there’s Seobok, an action/sci-fi film that will have you at the edge of your seat, as we follow terminally ill former intelligence agent Ki-heon in his steadfast efforts to safely transport the first human clone.

“Seobok and Hypnosis are movies of different genres that showcase the originality and artistry of Korean culture.

‘I would like to express my gratitude to all Malaysians who love Korea and Korean culture.

"Through this event, I would like to cheer for ‘deeper love’ for Korea and ‘strong will’ to overcome the pandemic,” adds Lee.In conjunction with the Korean Film Festival, there will be traditional Korean and Malaysian games for movie-goers to try their hand at.

This includes ddakji (yes, like we saw in Squid Game) where the goal is to flip over your opponent’s tile by slamming it with yours. All Korean Film Festival film screenings are free.

To redeem the tickets (which come with a complimentary popcorn and bottle of mineral water), go to the e-payment or the e-kiosk at GSC Mid Valley.

Redemption starts Nov 29 at noon, and is on a first-come, first-served basis while tickets last. There is a maximum of two tickets per redemption per pax.

All movies will be screened with English subtitles.

For the film schedule, visit https://www.facebook.com/koremy.eng and www.gsc.com.my. 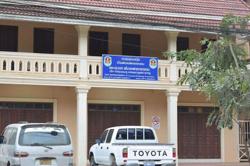 Adele postpones Las Vegas shows because half her crew is down with Covid-19
Ex-‘Dance Mom’ Abby Lee Miller sues hotel chain for millions after door falls on her
Grammy-winning singer Meat Loaf dies at 74
Heidi Klum’s legs are insured for RM8mil, but one is worth more than the other
Bradley Cooper was naked for six hours to shoot ‘Nightmare Alley’ full-frontal scene
Horror classic 'Scream' is back, and promises a bloody good time Premium
Andrew Garfield even lied to ex-girlfriend Emma Stone about ‘Spider-Man: No Way Home’ role
Former HK actress Gigi Lai shares rare snap with hubby on 13th wedding anniversary
Of course it’s weird: Daniel Radcliffe will play ‘Weird Al’ Yankovic in new biopic
Actor Jeff Daniels now has a spider-killing worm named after him