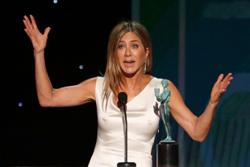 Jennifer Aniston shares on her Instagram story that Justin Theroux and Kuma had saved over 60 dogs. Photos: Handout and Justin Theroux/Instagram

Many pets have proven in recent years that they too can find fame on social media with a little help from their famous owners. The adorable pitbull, Kuma, has joined the handfull of Insta-famous dogs on Instagram thanks to her owner, actor Justin Theroux.

Kuma even managed to get a big shoutout from Theroux’s ex-wife, Jennifer Aniston. The Friends star praised the dog and her owner on her Instagram story.

The 52-year-old also highlighted that Kuma and Theroux had helped save 60 dogs with Austin Pets Alive! organisation. The bio on Kuma’s IG account has a link to the dog shelter’s website. The organisation’s goal is to eliminate the killing of pets in shelters.

Kuma was adopted by Theroux in 2018 following the aftermath of Hurricane Harvey. The 50-year-old actor had first heard about the dog while working with Austin Pets Alive! and decided to pay her a visit with the intention of adopting. The two have been pet adoption advocates ever since.

President and CEO of the organisation, Dr Ellen Jefferson said in a press release that the actor had been volunteering with them while filming The Leftovers in Austin. “He came in completely incognito. We are thrilled that he and Kuma are spreading the word about the work APA! is doing and the need to 'Keep Austin No-Kill',” she added.

Austin in Texas has been known as the largest no-kill city in the United States, saving about 100,000 animals in the process. Kuma and her owner look to continue supporting this movement.